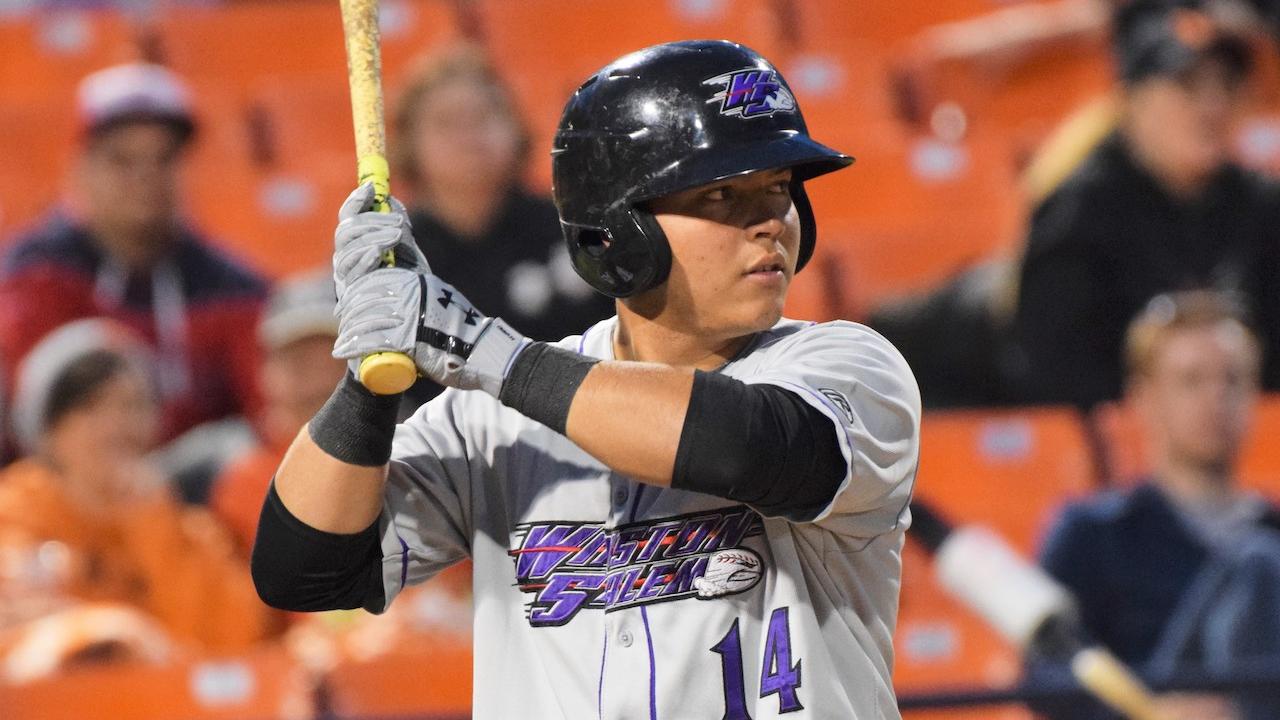 Carlos Perez was one of four Dash players with multiple hits on Sunday. (Patrick Cavey)

Along with the strong performance from Allen and the bats, the Dash benefitted from a great start by Jorgan Cavanerio  (9-3). The right-hander allowed just two runs on six hits across seven frames while striking out five and walking none.

For the third consecutive game, the Dash got on the board in the top of the first inning. Steele Walker led off the contest by hitting a bloop double into left-center field. With Mitch Roman at the plate, Walker stole third base. After Roman struck out, Andrew Vaughn hit an RBI groundout to shortstop, making it 1-0.

Winston-Salem added two more in the top of the second. To lead off the frame, Carlos Perez drew a walk. Two batters later, Allen crushed a two-run homer to center field, increasing the Dash edge to 3-0.

The Hillcats cut into the Dash lead in the bottom of the second inning. With one out, Jodd Carter hit a line drive single into right field. Following a Jason Rodriguez groundout, Henry Pujols belted a two-run homer to pull Lynchburg within a run.

However, Winston-Salem broke the game open in the top of the fourth inning. Perez led off the inning with a double before Jameson Fisher walked and Tate Blackman singled to load the bases. Following Blackman's single, Morris threw a wild pitch, allowing Perez to score to make it 4-2. After the wild pitch, Allen bounced a single into right field to score Fisher and push the lead to 5-2.

Following the RBI single, Allen stole second base. However, the throw from catcher Jason Rodriguez sailed into center field, allowing Blackman to trot home from third and extend the lead to four runs. Two batters later, Mitch Roman capped the four-run inning with a single into right field to bring home Allen and make it 7-2.

In the top of the sixth inning, Allen added on to his tremendous debut. With one out, the lefty slugger belted a solo shot down the left-field line to give the Dash an 8-2 advantage.

The Hillcats got one run back in the in the bottom of the eighth inning on an RBI single by Will Benson. However, Winston-Salem piled on two more in the top of the ninth on RBI singles from Vaughn and Blackman to cap the scoring at 10-3. Vaughn finished the contest 1-for-3 with two RBIs and two walks.

The Dash will conclude the series with the Hillcats and the 2019 season on Monday afternoon. Left-hander Konnor Pilkington (4-9, 5.15 ERA) will take the hill for Winston-Salem against right-hander Brock Hartson (2-2, 2.90 ERA). First pitch is set for 12:30 p.m., and fans can catch all of the action on wsdash.com/broadcast and the TuneIn Radio App. Pregame coverage commences at 12:15 p.m.