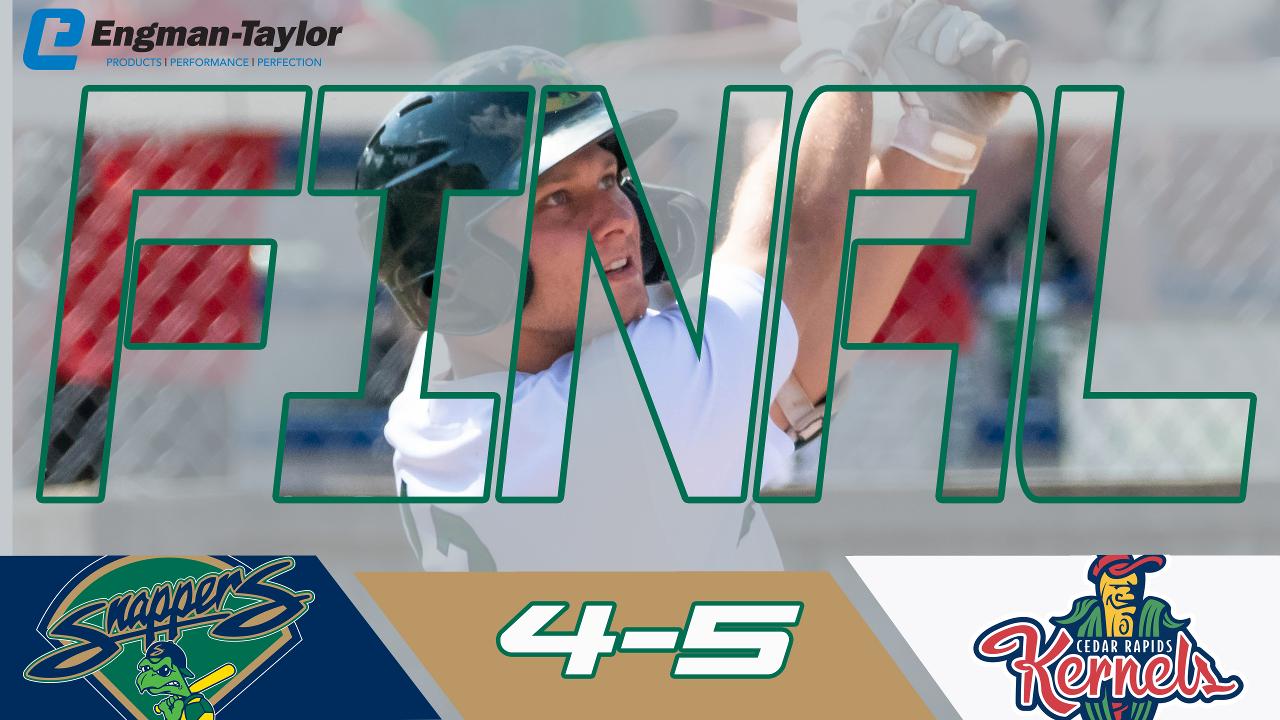 CEDAR RAPIDS, IA - Beloit led for most of the ballgame on Saturday night in Iowa, but could not hold on late falling to the Kernels 5-4. Beloit ended the game smashing 9 hits, but a 4-run Kernels 7th-inning was too much for Beloit in the losing effort.

Beloit would open the game landing 2 runs on the scoreboard to open up the scoring on the evening. 4 of the first 5 hitters in the first inning would reach for the Snappers allowing the snappers to catapult to a hot start out of the gates.

Max Schuemann led the inning off smashing his 23rd double of the season, while Marcos Brito singled one batter later to put runners on first and third with no outs. Then, Beloit would ground into a double play, but not after Schuemann would come home to score the first run of the game.

After two straight walks with two outs, Beloit would keep the inning going with Nick Ward standing in the batter's box. Ward would then rip a ball to first base that was misplayed by Cedar Rapids to plate another run and give the Snappers the early 2-0 lead.

However, Cedar Rapids would not go away quietly plating a run in the fourth and four runs in the seventh inning to take the 5-2 lead after 7 complete.

The resilient Beloit Snappers would continue to fight back though starting in the eighth inning. In the inning, Beloit would load the bases with no outs and after a bases loaded walk to Nick Osborne, Beloit would cut the lead to just 2 heading to the ninth.

Now in the final inning, Lester Madden would lead things off with a double down the left field line to apply some pressure to Cedar Rapids. After Madden advanced to third on a wild pitch, Santis Sanchez would hit a sharp groundball to short to knock in Madden and cut the deficit to just one solitary run.

Unfortunately though for Beloit, the Snappers were unable to get anymore baserunners on base falling to Cedar Rapids in the series opener.

Jhenderson Hurtado got the start for Beloit on the mound and was absolutely brilliant. Hurtado will be tabbed with a very tough no decision, but pitched well enough to get the win. Hurtado threw 5 solid innings, giving up just 1 run (unearned) on 5 hits and punching out 9.

Beloit will look to rebound tomorrow afternoon against the Cedar Rapids Kernels trying to even the series out. First pitch is scheduled for 2:05 with Snappers All-Star Aiden McIntyre getting the ball after tossing 7 scoreless innings his last time out.