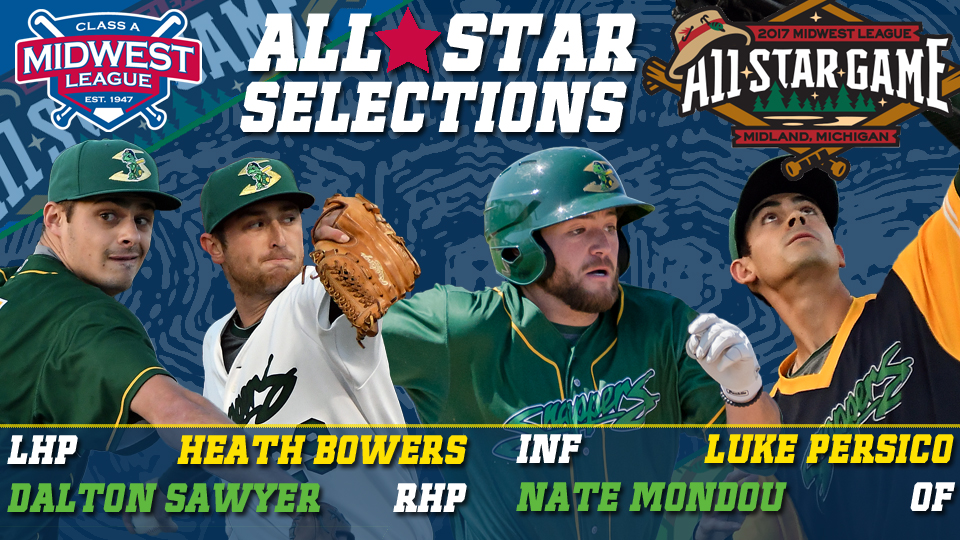 Nate Mondou will be the starter at second base for the Western Division team. This is Mondou's second All-Star nod of his career after making the New York-Penn League All-Star roster with Vermont last year. Mondou is currently third in the league with his .332 batting average which also leads all Oakland Athletics minor leaguers. A 13th round pick by the Athletics out of Wake Forest, he had a 20-game on-base streak earlier this season while collecting 18 multi-hit games during the First Half. Mondou has also delivered a pair of game-winning RBI triples on the road this year. His eight stolen bases lead the team and all A's farmhands.

Luke Persico was not on the Snappers Opening Day roster, but he hit his way into an everyday role with the team. A 12th round pick out of UCLA last year, Persico began the year hitting .045 through his first six games but took off on a .359 tare over the next month. He has compiled three four-hit games this year and drove in a career-high five RBI against Wisconsin on May 25, which was the first five RBI game by a Beloit hitter since the end of the 2015 season. The outfielder leads the Snappers with 33 RBI and 17 extra-base hits.

Dalton Sawyer has had a strong campaign in his first full season. The Athletics ninth round pick out of Minnesota in the 2016 draft leads the Snappers pitching staff in most pitching categories including innings pitched (56), earned-run average (2.25), and strikeouts (64). In his first professional start, Sawyer threw five perfect innings with eight strikeouts on April 23 vs. Burlington. He has allowed more than two runs in a game just once this year, a start he still earned the winning decision. His 2.25 ERA leads all pitchers in the Athletics organization while he is third in the Midwest League in strikeouts and opponent batting average (.178). Sawyer was recently promoted to High-A Stockton and will not participate in this year's All-Star Classic.

Heath Bowers was added to the Western Division roster as an injury replacement for Quad Cities pitcher Enoli Paredes. Bowers, a right-handed reliever, leads the Snappers with five wins on the season without a losing decision. He has also converted his lone save opportunity while being one of the most reliable arms out of the Beloit bullpen with 10 scoreless outings. A 24th round pick by the Athletics in the 2015 First-Year Player Draft, Bowers led the Vermont roster with 71 innings of work in 2016 and is working his first full year exclusively as a reliever.

The 2017 Midwest League All-Star Game will be played on June 20 at the Dow Diamond in Midland, MI, the home of the Great Lakes Loons. This year's contest will be the 53rd installment of the MWL All-Star classic. Complete rosters for the Western and Eastern All-Stars can be view with the links below.

The Beloit Snappers have been a member of the Midwest League since 1982 and have been the Single-A affiliate of the Oakland Athletics since 2013.