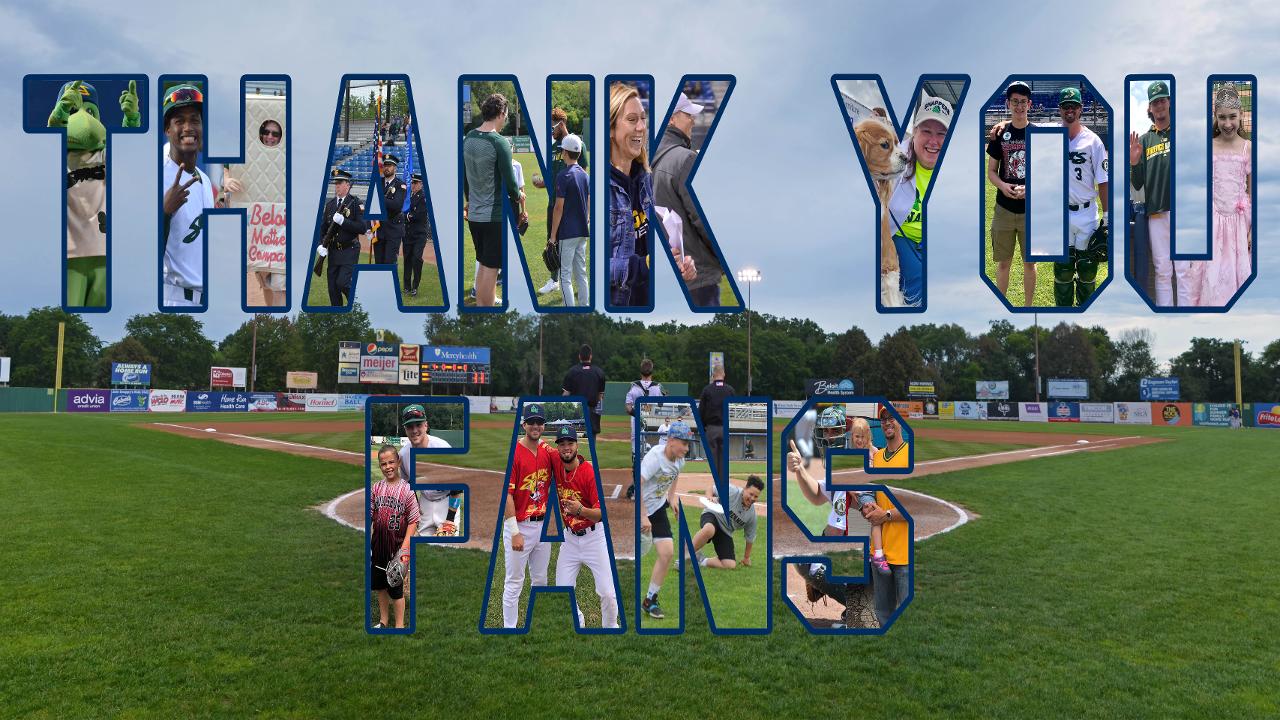 BELOIT, WI - On September 2, 2019, the Snappers put bow on the 2019 season and Beloit's 38th season of professional baseball at Pohlman Field. Beloit finished the season with an overall record of 54 wins and 84 losses with a season featuring plenty of ups and downs.

In 2019, the Snappers welcomed 43 different players to the beautiful Pohlman Field with 11 Snappers being called up to higher levels throughout the course of the season. However, the Snappers had a strong nucleus of 14 players that started the year and ended the year in Beloit.

Leading Beloit at the plate for the bulk of the year was a trio of players. Outfielder Anthony Churlin was a steady force in the Snappers heart of the order hitting .259/.332/.345. Churlin ended the year second on the team in hits (85) and was third on the team in RBI (39) anchoring down the middle of the lineup.

During the week of July 29 to August 4, Churlin earned Midwest League Player of the Week Honors for the first time and was the only Snapper to earn these honors in 2019. Churlin turned in an impressive week hitting for an average of .542 with a double, 9 RBI, and 7 Runs in route to a 7-game hitting streak.

A duo of infielders also had strong seasons providing depth to the Snappers batting order and consistent play throughout their stay in Beloit. Max Schuemann and Joseph Pena both solidified infield positions for the Snappers this year, while also turning in excellent seasons at the plate.

Max Schuemann hit for a strong .256 average on the year, while crossing the plate 57 times this season to lead the team. In addition, Schuemann led the Snappers in doubles with 29 which was 5th in the league and in stolen bases with 25 on the year ranking 7th in the Midwest League.

Schuemann's fellow infielder, Joseph Pena also turned in an impressive year playing in the third most games on the team (96), while hitting for a slash of .241/.364/.295. Pena ranked 4th on the team in hits (81) and led the team in walks (61) which ranked top 10 in the Midwest League.

The duo put together some impressive numbers which also contributed to overall team success at the plate this season. In the month of August, Beloit led the league in stolen bases with 49 in the month with the aforementioned trio accounting for 23 of the stolen bags.

As a team, the Snappers ranked 5th on the year in walks with 524 and ranked 5th in doubles on the road away from Pohlman Field. In fact, the Snappers boasted a road record of 33-38, which would have been higher if not for late struggles to end the year.

For Beloit on the mound, they were led by the likes of All-Star Aiden McIntyre, starting pitcher Reid Birlingmair, starter Chase Cohen and relievers Josh Reagan and All-Star Eric Mariñez. The group teamed up to solidify both the rotation and the back end, while turning in a solid year all around as a staff.

This season, the Beloit Snappers featured two All-Stars both coming from the pitching staff. Starter Aiden McIntyre and closer Eric Mariñez earned the All-Star nod from their jaw-dropping numbers in the first half of the regular season.

Aiden McIntyre was the workhorse for the Snappers on the mound eating up 112.2 inning on the year which was third most on the team. In way to earning the All-Star nod, McIntyre had a staggering ERA of 2.24 in over 50 innings pitched with 79 strikeouts along the way which was third most in the league. After the conclusion of the season, McIntyre ended as the Midwest League leader in strikeouts with 150 to cap off an impressive year for the right-hander.

Eric Mariñez earned the other All-Star nod for the Snappers before being promoted to Advanced-A Stockton on June 30th. In the first half, Mariñez tossed 28.1 innings in route to a league leading 10 saves. Mariñez locked down the back end for Beloit only blowing one save and punching out 40 with a 3.18 ERA earning the well-deserved All-Star selection.

Other notable standouts for the Snappers was starting pitcher Reid Birlingmair who turned in a solid season for Beloit from start to finish. Birlingmair ended the year 9th in the league innings pitched (123.0) and strikeouts (120) finalizing a solid year for Birlingmair on the bump.

In addition to Mariñez, Josh Reagan also turned in an impressive performance after coming over to Beloit on July 3rd. Reagan held the second-best bullpen ERA of 2.20 in the second half while also earning 4 victories in 32.2 innings pitched. He also struck out a whopping 31 hitters in relief and only surrendered 8 earned runs total on the season.

Last but not least, Chase Cohen (Athletics 9th Round of 2018 MLB Draft) turned in a solid year, but an even better second half to close out the season. In the second half, Cohen had a staggering 2.01 ERA in just under 50 innings pitched, while striking out 50 and earning 2 saves and a win in the second half.

Highlighting the Snappers promoted Double-A members was flame throwing right-hander Wandisson Charles who moved from Beloit to Stockton to Midland, outfielder Chase Calabuig, catcher Cooper Goldby, Infielder Brallan Perez, and left-handed hurler Jhenderson Hurtado. All 5 of these players are still currently in Midland and are gearing up for a playoff race beginning soon for the Rockhounds.

6 players got the call up from Beloit to Stockton this season including Snappers All-Star Closer Eric Mariñez, utility player Payton Squier, starting pitcher Bryce Conley, infielder Ryan Gridley, reliever Michael Danielak, and reliever Ty Damron. The group continued their success in Stockton and dreams of making it to the major leagues in California to conclude the '19 season.

For Beloit, the Snappers welcomed the likes of some of the Oakland Athletics biggest and brightest prospects for the coming future. Marcos Brito headlined the 2019 Snappers earning the right as the Athletics #16 overall prospect in their MLB Pipeline to start the year. Brito battled injuries throughout the season but was a steady force in the Snappers lineup and a very smooth fielding middle infielder.

Going across the diamond into the visiting dugout, Pohlman Field welcomed many other top-level prospects outside of the Athletics organization. Staying local in the state of Wisconsin, Brice Turang, the Milwaukee Brewers #1 overall prospect, made a couple of visits to Beloit taking on the Snappers 8 times at Pohlman Field.

Looking beyond the on-field talent, the Snappers had a star-studded list of promotions that garnered the attention of over 70,000 fans to walk through the gates of Pohlman Field. At the top of the list was the Snappers Nickelodeon Day featuring PAW Patrol which welcomed Marshall the Firehouse Pup to Pohlman Field for the first time in its existence.

The Snappers also created some fun new promotions adding to the exciting and creative atmosphere at the ballpark. We had 4 Bark in the Park Nights where fans could bring their pups with them, a blanket giveaway, an oven mitt giveaway, a book giveaway that was designed for a day at Pohlman Field with Snappy, a Lou Trivino Bobblehead, two Iron Country Nights, a team photo giveaway, and nine of the BEST fireworks shows in Beloit.

Capping the season off was the Snappers Fan Appreciation Night that garnered a crowd of over 2,900 people as the Snappers way of saying thank you to their fans. On top of the game, there was a terrific fireworks show, our 16th annual Mega Raffle drawing, and various donation prizes given by Snappers partners to fans to complete a fun end to the Snappers season.

Needless to say, it was a fun-filled season with tons of talent and brand-new, creative promotions at Pohlman Field. However, it would not have been done without the help and support of a couple important groups.

First and foremost, the Snappers fans. You are the driving force behind everything we do with the Snappers and we are extremely thankful for your continued support over the last 38 seasons. Beloit Snappers fans are the BEST fans in sports, and we are looking forward to an awesome 2020.

Secondly, our community partners. Many of these great promotions, events, and the overall atmosphere at Pohlman Field would not be made possible without the support of our community partners. We thank every single partner for their continued support of Snappers baseball and for making Pohlman Field the place that it is today - a fun, family friendly baseball stadium.

Last but certainly not least, we would like to thank all of our volunteers and staff that make Pohlman Field the magical place that it is 70 plus nights a year. They are the smiling faces you see at the gates, the concessions, and in the crowd and we are grateful to have such an amazing group of people here in Beloit.

As we close the book on the 2019 season, we open a new chapter to the 2020 season that will begin on April 9th against the Clinton LumberKings, right here in Beloit. THANK YOU to everyone involved in making 2019 a major success and we are looking forward to making 2020 even better!