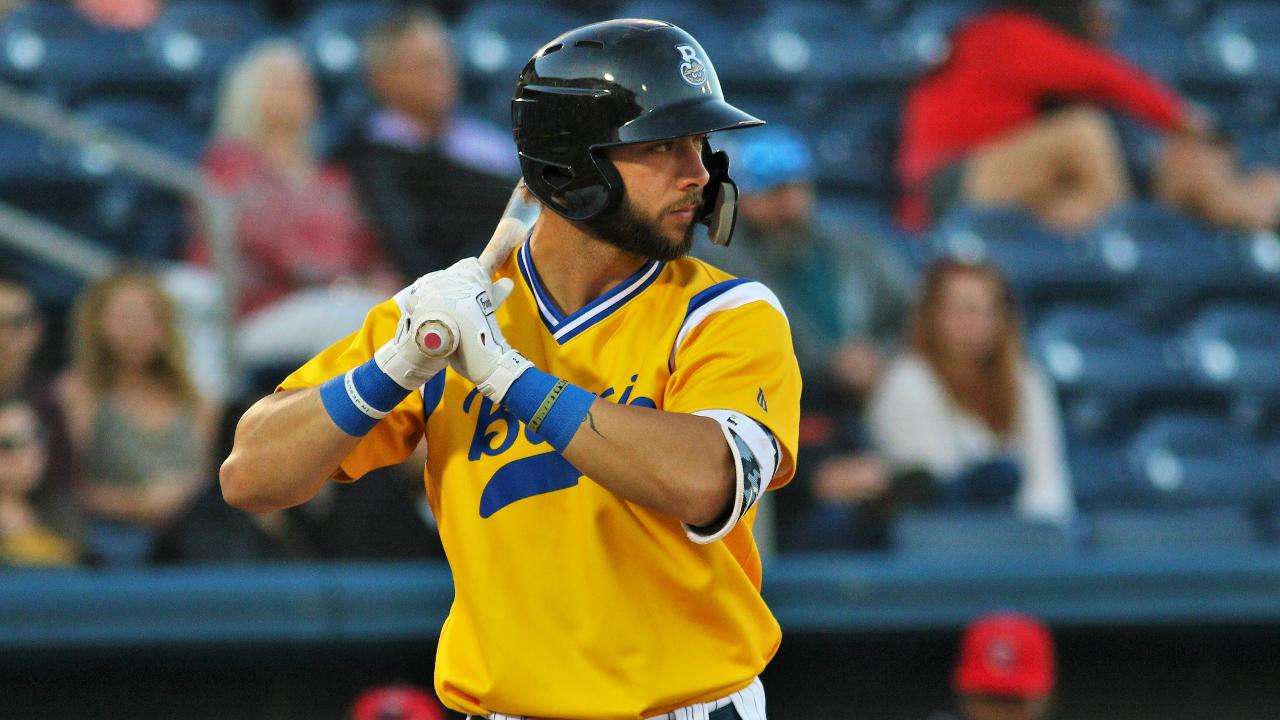 Weston Wilson put together a four-hit night against the Jacksonville Jumbo Shrimp on April 20 at MGM Park. Wilson came up a triple shy of the cycle, but recorded a multi-home run game. (Michael Krebs)

The Biloxi Shuckers (8-8) erupted for eight runs in the 6th inning of Saturday's series opener with the Jacksonville Jumbo Shrimp (5-11) at MGM Park to lock down a 12-7 win. Third baseman Weston Wilson went 4-for-5, launched a pair of home runs, and fell a triple shy of the cycle leading in Biloxi's 15-hit effort.

Biloxi opened the scoring on Saturday night but surrendered the lead and found themselves trailing 4-2 before the sixth inning barrage.

Wilson got it started for the offense with a leadoff double, Patrick Leonard singled and Michael O'Neill walked to load the bases against Cody Poteet (L,1-2). Parker Bugg replaced Jacksonville's starter and walked Blake Allemand to bring home the first run of the inning. Two batters later, Bruce Caldwell smacked a fly ball to the deep part of center for a sacrifice fly to send Leonard home and tie the game.

With the lineup turned over and runners on the corners, Trent Grisham delivered a go-ahead two-run triple into the right-field corner to regain the lead at 6-4. Grisham's three-bagger was the first of four two-out hits in a row as the Shuckers continued to tack it on.

C.J. Hinojosa singled home Grisham before Dillon Thomas launched his second home run of the season, a two-run shot to right. In his second at bat of the inning, Wilson yanked a solo homer to left field and capped the eight-run frame to make it 10-4. The Shuckers sent 12 batters to the plate in the inning, the most in a single frame this year.

Later on in the eighth, the Shuckers would go back-to-back for a second time. Weston Wilson went yard to the opposite field off Elvis Araujo and Patrick Leonard followed up with his second-long ball of the year. The Shuckers four home-runs on the night also set a new single-game high for 2019.

The game stayed scoreless in the early innings as RHP Marcos Diplan stranded the bases loaded in the second and left a man on third in the third inning. Diplan worked 4.2 innings, his longest start of the year, striking out four and walking four. O'Neill and Luis Aviles Jr. linked up for consecutive RBI singles in the fourth to give the Shuckers their first lead at 2-0. Justin Twine and Joe Dunand would tie it up in the fifth with a pair of RBI knocks off Diplan before his departure.

RHP Nattino Diplan (W, 1-0) would surrender the lead in the sixth on an RBI double to Brian Miller, who finished 5-for-5 at the dish and fell a home run shy of the cycle. Miller proceeded to swipe third and strolled home after a missed catch from Wilson and gave the Jumbo Shrimp their largest lead at 4-2. Trailing by seven Bryson Brigman added the final two runs of the night for Jacksonville with a two-run home run off RHP Aaron Kurcz.

Biloxi's ten-game homestand and five-game series against the Jacksonville Jumbo Shrimp continues on Sunday at 2:35 pm at MGM Park. The Shuckers will send RHP Trey Supak (1-1, 2.16) to the mound against Jumbo Shrimp LHP McKenzie Mills (0-2, 6.75). The game can be heard locally in Biloxi on Cruisin' WGCM AM 1240/ 100.9 FM, TuneIn Radio or the MiLB First Pitch App. Fans can also watch the game on MiLB.TV and can save $10 off their subscription when they use the promo code 'Shuckers' at check out. It's an Easter Eggstravaganza at MGM Park with a postgame Easter egg hunt. It's also Salute Sunday with discounted tickets for active and retired military personnel.