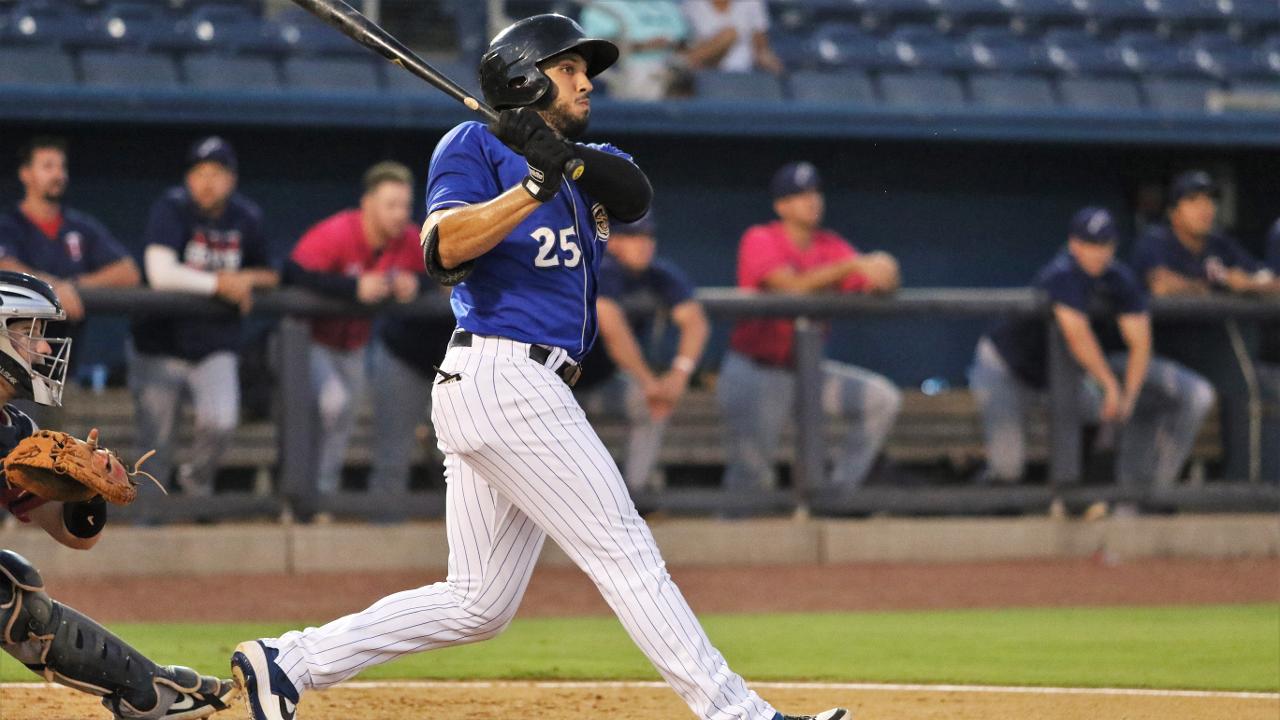 In a game that saw ten doubles, six home runs and five lead changes, Dillon Thomas' walk-off home run in the tenth gave the Biloxi Shuckers (1-0) an 11-10 win over the Pensacola Blue Wahoos (0-1) on Wednesday night at MGM Park. It's the second consecutive season the Shuckers have topped the Blue Wahoos in walk-off fashion to open the Southern League playoffs.

Tied at 10-10 in the bottom of the tenth, LHP Jovani Moran (L, 0-1) walked Luis Aviles Jr. to start the inning, but Cooper Hummel bounced into a double play to cancel out the runner. Down in a 1-2 count, Thomas connected for a 433-foot homer to straightaway center, sending the Shuckers into a frenzy at home plate for an 11-10 winner.

The Shuckers had to overcome a blown lead in the ninth inning to force extras. Up 9-5 heading to the top of the ninth inning, RHP Nate Griep entered the game and issued a pair of walks on either side of a double, loading up the bases with no outs. Alex Kiriloff then lifted the second pitch of his at bat over the right-field wall, tying the game with a grand slam. RHP Justin Topa (W, 1) replaced Griep but surrendered a solo home run to Royce Lewis, putting Pensacola in front 10-9.

In the bottom of the ninth, C.J. Hinojosa led off with a single and moved to second on a wild pitch from RHP Alex Philips (BS, 1). After a pair of flyouts, Phillips had a two-strike count on Joantgel Segovia, but the Shuckers outfielder bounced a single into right, scoring Hinojosa from second to send the game to extras.

Biloxi jumped out to an early 2-0 lead through three innings after Hummel scored on a pair of wild pitches. RHP Alec Bettinger retired the first nine men he faced in order but allowed three runs on four doubles in the fourth as Pensacola went in front 3-2. The Shuckers recorded a big inning of their own in the fifth, scoring five runs on a Thomas RBI single and a pair of two-run homers by Hinojosa and Jake Gatewood.

Pensacola replied to the Shuckers bottom of the fifth with a pair of runs in the top of the sixth, but Luis Aviles Jr. doubled home Max McDowell in the sixth to extend the Shuckers back to a three-run advantage. Bruce Caldwell appeared to put Biloxi in front for good with a solo home run in the seventh, pushing the Shuckers to a 9-5 lead.

Leading 1-0 in the series, the Shuckers continue their best-of-five matchup with the Blue Wahoos on Thursday night at 6:35 pm. Biloxi will throw RHP Dylan File while the Blue Wahoos will counter with RHP Griffin Jax. It's Double Play Thursday presented by Polk's Meat Products, Yuengling and Kicker 108, with $2 Yuengling, $2 hot dogs, $2 Coca-Cola products and $3 draft beer specials. The game can be heard locally in Biloxi on Cruisin' WGCM AM 1240/100.9 FM, TuneIn Radio or the MiLB First Pitch App and can be seen on MiLB.TV. Fans can save $10 off their subscription when they use the promo code 'Shuckers' at checkout.

With the 2020 Southern League schedule announced, Shuck Nation Memberships for the 2020 season are available by calling 228-233-3465 or by visiting the Biloxi Shuckers front office. The Biloxi Shuckers will host Game 2 of the South Division Championship Series on September 5 at MGM Park. Tickets for all five potential playoff games at MGM Park are on sale now.