Class A Advanced circuit hands out awards for 2015 MiLB season 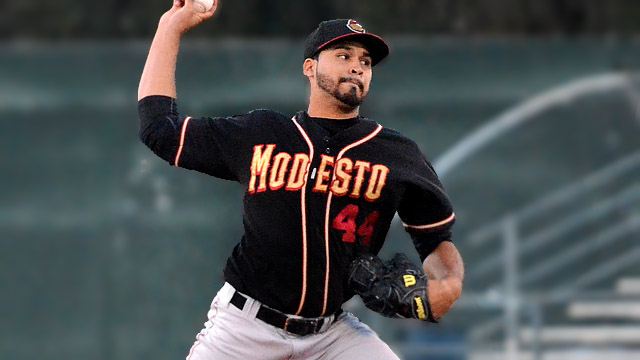 Modesto's Antonio Senzatela leads the Cal League in ERA (2.40) and is third in strikeouts (124). (Ricky Bassman/MiLB.com)

J.R. House was named Manager of the Year. In his first year as manager in the Cal League, House has seen his Visalia Rawhide lead the league in wins. The Rawhide won the first half and by doing so have a first round bye in the playoffs. House is a former big league catcher with the Pirates, Astros, and Orioles. He also played in the Royals and Mets organizations.

Joining House is Gil Heredia, who was named Cal League Coach of the Year. Heredia, the Rawhide Pitching Coach, played 10 seasons in the Major Leagues. His pitching staff currently is 2nd the Cal League in ERA (3.56), strikeouts (1149), and leads the League in Shutouts (13), Saves (41), and WHIP (1.22).

The Modesto Nuts have the Pitcher of the Year. RHP Antonio Senzatela is in his third season in the States. The 20-year old Venezuelan leads the Cal League in ERA (2.40), third in strikeouts (124), and first in WHIP (1.05). He also is tied for third in the league in wins with eight. Below are the rest of the awards and honors for the 2015 season: