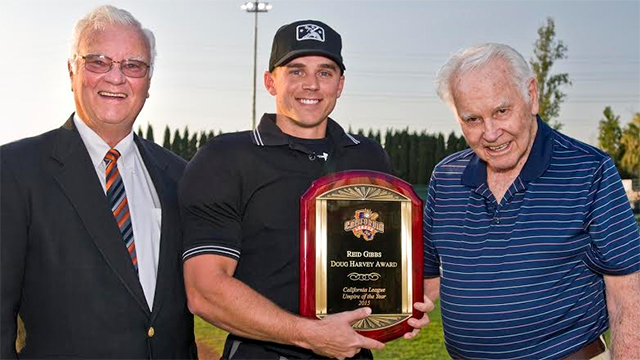 In a pregame ceremony at Sam Lynn Ballpark in Bakersfield, Reid Gibbs was presented the sixth Doug Harvey Award. Gibbs is in his fourth season as a Minor League umpire. The 28-year old from Glendale, Arizona, will be the crew chief during the Cal League Championship Series later this month.

"Congratulations to Reid Gibbs for being the Sixth recipient of the Doug Harvey Award," league president Charlie Blaney said. "Reid is an exceptional young man, and we have been honored to have him in the league for the past two seasons. The Cal League sincerely thanks Doug Harvey for lending his name once again to this prestigious award."

Harvey was on hand to present the award.

Gibbs was the top vote-getter in balloting among Cal League managers, who know and work with the umpires more than anyone else in the league.

Harvey was a Major League umpire for 30 years and umpired in five World Series, six All-Star Games and nine National League Championship Series. He was nicknamed "God" by players because of his strict focus on the rules of the game. Harvey was ranked as the second-greatest umpire in baseball history, according to the Society for American Baseball Research, behind only Bill Klem. In 2007, Referee magazine selected him as one of the 52 most influential figures in the history of sports officiating. He began his professional umpiring career in the Cal League in 1958 and umpired there for the 1959 and 1960 seasons before moving up to Triple-A.

About the Cal League:

The California League was founded in 1941 by a combination of Major League and Pacific Coast League clubs. The league currently has 10 teams and plays a 140-game season starting in April, with the regular season wrapping up on Labor Day. Over the years, the California League has produced 17 Hall of Famers, 16 MVP winners, 19 Cy Young Award recipients and has 32 Rookie of the Year award winners. The California League has become the premier Class "A" League in Minor League Baseball. See today's Minor League stars on their way to becoming tomorrow's Major League legends taking the field for the Bakersfield Blaze, High Desert Mavericks, Inland Empire 66ers, Lake Elsinore Storm, Lancaster JetHawks, Modesto Nuts, Rancho Cucamonga Quakes, San Jose Giants, Stockton Ports and Visalia Rawhide.