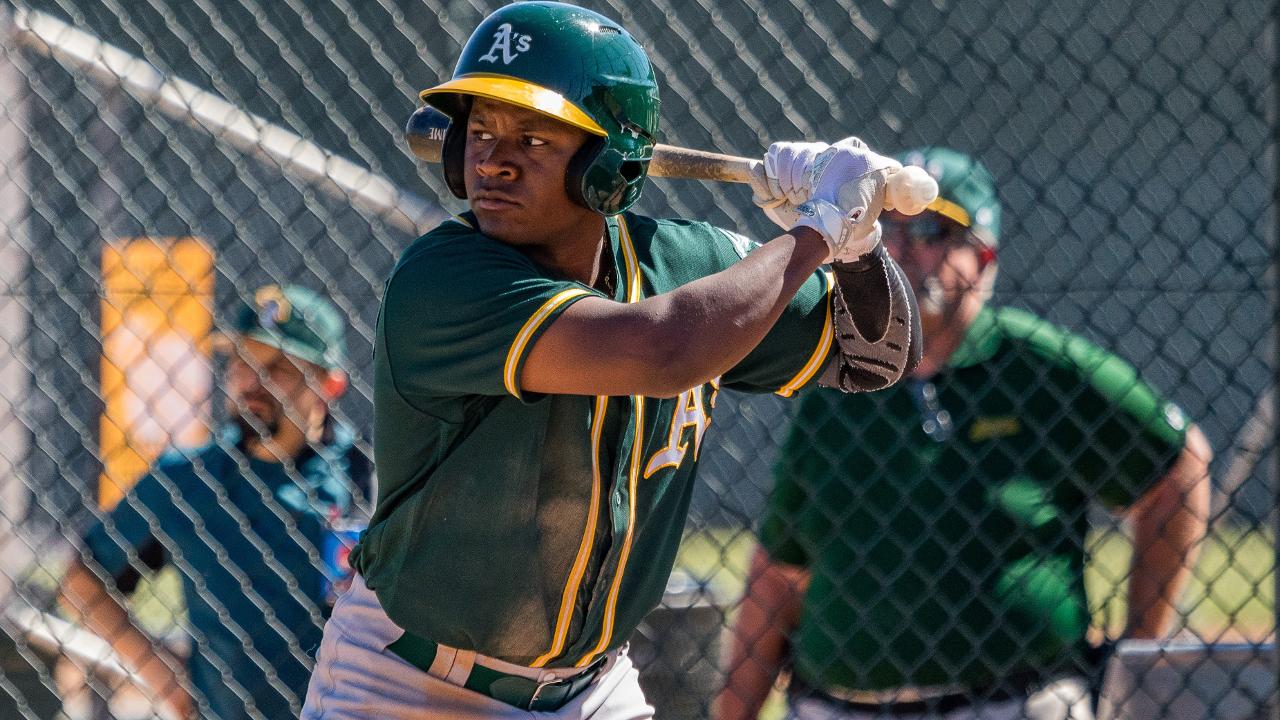 Since the end of April, it's been hard to get Jameson Hannah out.

The A's No. 7 prospect went 3-for-4 with a pair of walks and three runs scored on Saturday, helping Class A Advanced Stockton roll to a 12-3 win over Lancaster at The Hangar.

"I feel like over the course of the season, my swing has come along," Hannah said, "and I'm just feeling good at the plate and try to barrel balls any place I could put them."

The 21-year-old Texan said it just took a lot of repetitions at the plate to get comfortable hitting against California League pitching.

"I felt like the swing was there," Hannah said of his April struggles, "but it just takes at-bat after at-bat, just being able to grind through those tough ones, knowing that the swing is there but you're missing pitches. After a while, I'm gonna be able to come through and get back in the groove of things."

Hannah singled up the middle and scored in the Ports' four-run first inning, then walked and scored again in the second against JetHawks starter Lucas Gilbreath. He singled to center field in the third and doubled to right and scored in the sixth against right-hander Nate Harris to extend his hot streak.

Hannah said the key is not missing the pitches in the zone and focusing on driving fastballs to all parts of the field.

"Guys here have good stuff," he added, "so being able to be on time with that fastball instead of waiting around and having to hit their breaking balls and changeups."

The Dallas Baptist product recorded four multi-hit games in April, a total he's matched over his last six games with a 10-for-27 (.370) stretch. Hannah has 16 extra-base hits, including one homer, and 11 RBIs in 49 California League games. The second-round pick in last year's Draft debuted with Class A Short Season Vermont, where he batted .279/.347/.384 with a homer and 10 RBIs in 23 games.

"The big deal is not being able to put too much pressure on yourself, knowing that the guy behind you is gonna get the job done as well," Hannah said. "When we get those pitches to hit, we gotta make sure to put a good swing on them."

The guys behind and in front of Hannah in the lineup got the job done on Saturday.

Stockton totaled 18 hits, with A's No. 15 prospect Nick Allen going 3-for-6 with a triple, double and two runs scored. Alfonso Rivas, ranked 24th in the Oakland system, chipped in two hits, scored four runs and drove in three, while No. 4 prospect Lazaro Armenteros was 2-for-5 with two RBIs and a run scored. Fifth-ranked Austin Beck added two hits, an RBI and two runs scored.

Seth Martinez got the win in relief, allowing two runs on three hits in three innings. He struck out two and did not walk a batter.

Rockies No. 8 prospect Ryan Vilade hit a two-run double and Carlos Herrera singled twice and scored a run for Lancaster.