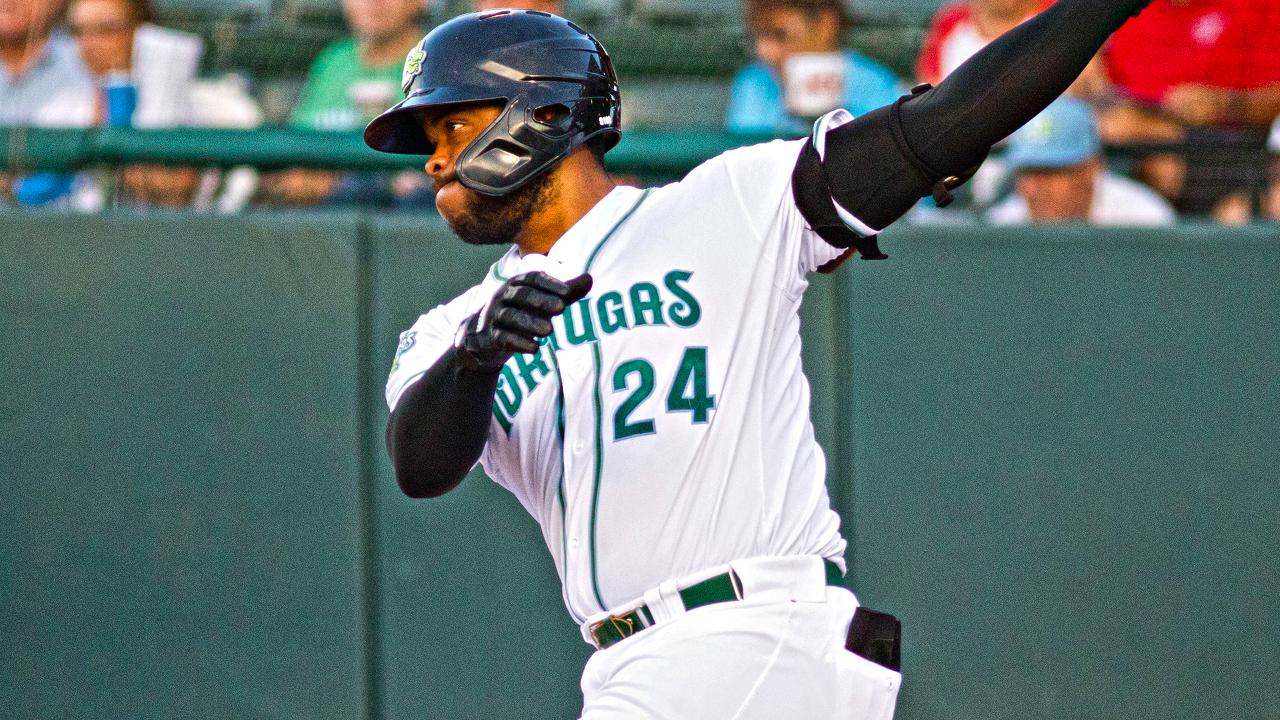 C Hendrik Clementina garnered four hits - including a colossal home run - and drove in two, as the Daytona Tortugas rallied to defeat the St. Lucie Mets, 6-5, in front of 1,858 fans at Jackie Robinson Ballpark on Tuesday night. (Aldrin Capulong)

DAYTONA BEACH, Fla. - For the second-straight night, Daytona completed a comeback, as the Tortugas rallied from four down to sink the St. Lucie Mets, 6-5, in front of 1,858 fans at Jackie Robinson Ballpark on Tuesday evening.

With Daytona's victory (30-37, 65-67) - coupled with Clearwater's triumph over Lakeland and Dunedin's doubleheader split with Fort Myers - the Tortugas will enter Wednesday in a virtual tie with the Threshers for the second and final playoff spot in the Florida State League North Division.

An inning later, Daytona kept the pedal to the metal. With nobody on and one out, C Hendrik Clementina (4-4, R, 2B, HR, 2 RBI) demolished a 3-1 offering off his own headshot on the videoboard in left-centerfield. The solo blast - his team-leading 14th of the year - cut the 'Tugas deficit to one, 5-4.

A walk to 3B Bryant Flete (0-3, R, BB, SO) and a throwing error that enabled Manzanero to reach kept the rally alive with two away. On the first delivery after a pitching change, Mount scalded a liner into the corner in right. Both runners raced around to score on the 23-year-old's double, giving Daytona the lead once again, 6-5.

The Tortugas' bullpen made sure that one-run lead stayed put. RHP Julio Pinto (2.0 IP, 3 H, 2 SO) worked himself out of trouble in the seventh - earning his second win of the year - while RHP Dauri Moreta (2.0 IP, 2 SO) retired all six batters he faced to seal the victory and his second save.

Fun and community will be center stage tomorrow with a Wishful Wednesday presented by VyStar Credit Union. Each Wednesday home game, the Tortugas celebrate, recognize, and help raise awareness and funds for local charities around Volusia County. We celebrate the start of the new school year and welcome elementary school students throughout the area with our Back to School Night in partnership with Volusia County Schools. Fans are encouraged to bring their four-legged furry friends for a "nine-inning vacation" of their own for a Bark in the Park Night presented by NextHome at the Beach. For just $2, patrons can purchase a "pooch pass" to have their pup join them at the game. The 'Tugas will also host their Yappy Hours with $3 spiked seltzer's all evening long. The third contest will get underway at 7:05 p.m.

The Tortugas Pre-Game Show will kick off the broadcast at 6:50 p.m. ET, leading up to the 7:05 p.m. ET start at Jackie Robinson Ballpark. Wednesday evening's affair can be heard on www.daytonatortugas.com or via the TuneIn Radio and MiLB First Pitch apps.

Tickets are still currently available and can be purchased online at www.daytonatortugas.com, or by calling the Tortugas' Ticket Office at (386) 257-3172.