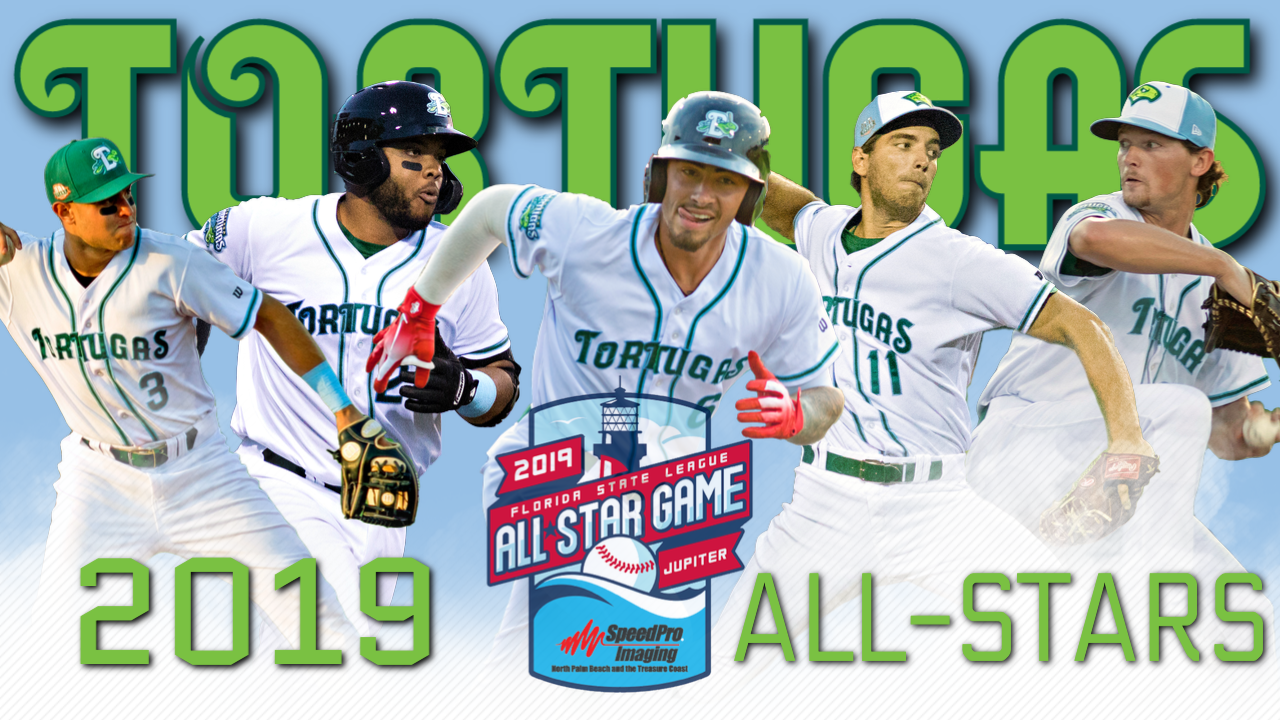 After collecting seven All-Stars a year ago, Daytona is among the league's leaders in All-Star selections in 2019. With five players named to the mid-season classic, the Tortugas are tied with the Clearwater Threshers and the Dunedin Blue Jays for the most selections among North Division squads. The Fort Myers Miracle lead all FSL teams with eight players selected.

For the third-consecutive season, catcher Hendrik Clementina has received a nod to his league's All-Star Game. The 21-year-old received the honor with the Ogden Raptors of the Pioneer League in 2017 and again with the Dayton Dragons of the Midwest League in 2018. In 34 games this season, Clementina has accumulated a .239 average (32-134) with seven runs scored, five doubles, four home runs, and 17 RBI. After being held to a .150 average (6-40) over his first 11 appearances of the season, the Willemstad, Curaçao native has registered a .277 clip (26-94) with seven extra-base hits and 17 RBI in 23 games since he clubbed his first home run of the year on April 24 vs. Dunedin. The No. 21 prospect in the Reds' organization according to Baseball America was acquired by Cincinnati from the Los Angeles Dodgers with OF Scott Van Slyke in exchange for LHP Tony Cingrani on July 31, 2017.

Third baseman Jonathan India has been chosen to the FSL's All-Star Game in his first full professional season. Entering Friday, the 22-year-old has posted a .261 average (41-157) with 28 runs scored, six doubles, two triples, six home runs, and 18 RBI in 43 contests for the Tortugas. India comes into the day third in the league in runs scored (28) and tied for fourth in the league in home runs. The Coral Springs, Fla. native leads the circuit in runs (28) and hits (39) by a third baseman while ranking second in home runs (6) and RBI (18). India is considered the Reds' No. 4 prospect and the No. 45 prospect in all of baseball, according to Baseball America. The right-handed swinger was selected by the Cincinnati Reds in the first round (fifth overall) of the 2018 MLB Draft out of the University of Florida.

Switch-hitting second baseman Alejo Lopez has been named a mid-season All-Star for the first time in his five-year professional career. The 23-year-old has entered 40 contests for Daytona, accruing an impressive .287 mark (45-157) with 27 runs scored, five doubles, a triple, a home run, and 19 runs driven in. Coming into Friday, Lopez sat in a tie for fourth in the FSL in runs scored (27). Additionally, the Phoenix, Ariz. resident leads all second basemen in the circuit in runs scored (17) and is second in RBI (15). Lopez was chosen by the Cincinnati Reds in the 27th round of the 2015 MLB Draft out of Greenway High School (Phoenix, Ariz.).

Few pitchers in the circuit have been more impressive than left-hander Packy Naughton . The 23-year-old earns his second mid-season All-Star nod after being selected as a Pioneer League Mid-Season All-Star with Rookie Billings in 2017. Naughton comes into the day with a 5-2 record and a 2.63 ERA (15 ER in 51.1 IP) and 50 strikeouts in nine starts for Daytona. At the time of the announcement, the West Roxbury, Mass. native is in a five-way tie for the league-lead in wins (5). He is also third in innings pitched (51.1) and fourth in strikeouts (50). Through the season's first two months, Naughton is on pace to set a new career-best in WHIP (1.13), too. The organization's No. 21 prospect per MLBPipeline.com was drafted by the Cincinnati Reds in the ninth round of the 2017 MLB Draft out of Virginia Tech.

Closing out Daytona's honorees is the man who has thrived closing out games for the club, right-handed reliever Ryan Nutof . In 17 relief outings for the Tortugas in 2019, the 23-year-old has hoisted a stellar 2-0 mark with a 3.00 ERA (7 ER in 21.0 IP), six saves, and 27 strikeouts. After surrendering six runs in his first two appearances of the season, Nutof has been lights out. The South Elgin, Ill. native has tallied an astounding 2-0 record with a minuscule 0.47 ERA (1 ER in 19.1 IP), six saves, four walks, and 24 strikeouts in his last 15 outings. Coming into Friday, Nutof has made the most relief appearances in the league (17) and sits in a three-way tie for second in the FSL in saves (6). He is also tied with Fort Myers' Hector Lujan for the lowest walks-per-nine ratio (1.29) among relief pitchers. The All-Star selection is the first of Nutof's career. The Longwood, Fla. resident was taken by the Cincinnati Reds in the 16th round of the 2017 MLB Draft out of the University of Michigan.

In addition to five players heading to Jupiter for the festivities, Daytona's entire coaching staff will be making the trip, as well. After winning the North Division crown in 2018, the Tortugas' staff will make up the coaches for the division's squad in the mid-season classic. Manager Ricky Gutiérrez will headline the staff and will be accompanied by hitting coach Alex Peláez, pitching coach Tom Brown, bench coach Lenny Harris, athletic trainer Ryan Ross, and strength and conditioning coach Trey Strickland.

The 2019 edition of the Florida State League All-Star Game takes place on Saturday, June 15 at Roger Dean Chevrolet Stadium in Jupiter, Fla., home of the Jupiter Hammerheads and Palm Beach Cardinals. Players were selected by a vote of League field managers, coaches, radio broadcasters, and media members. A home run derby will take place prior to the contest at 5:10 p.m. ET. First pitch of the game is slated for 7:05 p.m. ET with fireworks to follow the final out. For more information on the All-Star Game, fans are encouraged to contact Roger Dean Chevrolet Stadium at 561-775-1818.

Daytona continues their seven-day, eight-game homestand on Friday night against the Fort Myers Miracle, the High-A affiliate of the Minnesota Twins. The Tortugas are expected to send RHP Ryan Lillie (1-3, 3.81 ERA) to the hill. Fort Myers is projected to counter with LHP Tyler Watson (1-4, 4.66 ERA).

The Tortugas Pre-Game Show will kick off the broadcast at 6:50 p.m. ET, leading up to the 7:05 p.m. ET start at Jackie Robinson Ballpark. Friday evening's contest can be heard on daytonatortugas.com or via the TuneIn Radio and MiLB First Pitch apps.

It will be a perfect night for "Parrotheads", as we continue our Best Dressed Friday series. The Tortugas will celebrate Margaritaville Night with special tropical-themed uniforms worn by players and coaches. The unique jerseys will be auctioned off online throughout the weekend. As a part of the fun, there will be a pregame concert on the concourse by Captain Josh, as well as drink and "Cheeseburger in Paradise" specials all evening long. Fans are encouraged to arrive early for our Friday Night Happy Hour presented by Kona Brewing. Patrons can enjoy buy-one, get-one Kona beer products, and Bud Light from 5:30 p.m. until first pitch. Following the final out, those in attendance will be treated to another marvelous Postgame Fireworks display.

Multi-game plans and single-game tickets are still currently available and can be purchased online at www.daytonatortugas.com, or by calling the Tortugas' Ticket Office at (386) 257-3172.