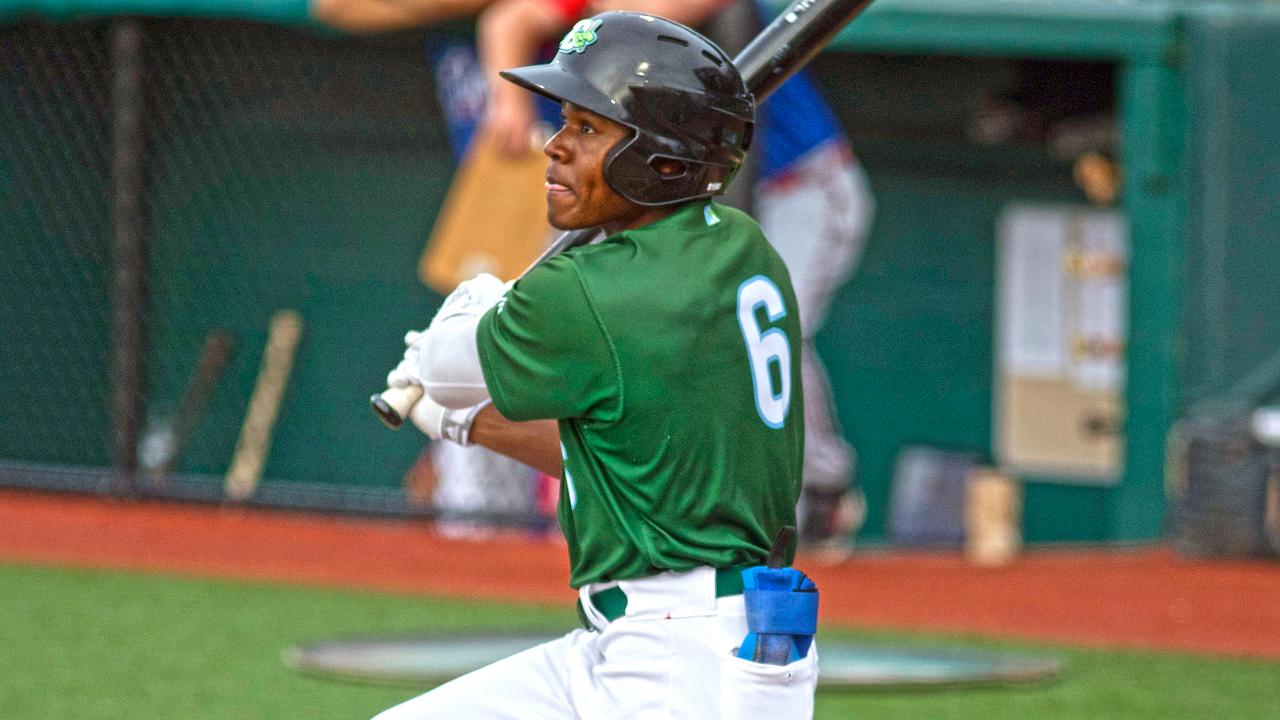 CF Jameson Hannah drove in a pair of early runs, as the Daytona Tortugas toppled the Palm Beach Cardinals, 7-3, in front of 1,171 fans at Jackie Robinson Ballpark on Sunday evening. (Aldrin Capulong)

DAYTONA BEACH, Fla. - Eight of Daytona's nine hitters picked up at least one base-hit, as the Tortugas captured the rubber match of their series with a 7-3 victory over the Palm Beach Cardinals in front of 1,171 fans at Jackie Robinson Ballpark on Sunday evening.

With their victory over Palm Beach (19-38, 54-67) - coupled with the Clearwater Threshers' loss to the Florida Fire Frogs earlier in the day - Daytona (26-33, 61-63) now holds sole possession of the final playoff spot in the Florida State League North Division. The Tortugas control a one-game lead over Clearwater for the wild card going into the final off day of the regular season.

Daytona wasted no time getting on the board, as they batted around in the opening frame. An infield single by RF Andy Sugilio (3-5, 2 R) and a fielder's choice throwing error started the rally. 1B Bruce Yari (2-5, 2 R, 2B, 2 RBI) followed with a run-scoring ground-rule double to left-center, giving the Tortugas a 1-0 lead. After a strikeout, CF Jameson Hannah (1-5, R, 2 RBI, SO) ripped a two-RBI knock to center to make it a 3-0 contest.

Two innings later, they were at it again. With one on and two out, LF Lorenzo Cedrola (1-4) reached on an error to extend the frame. 2B Brian Rey (1-4, 2B, RBI) proceeded to then clobber a ground-rule double of his own over the fence in center. The 21-year-old's two-bagger drove in another tally to give Daytona a four-run lead, 4-0.

After Palm Beach pulled to within two in the fourth on a throwing error and a LF Cole Kreuter (2-4, RBI, 2 SO) RBI single, the Tortugas answered. Following consecutive singles from Sugilio and SS José García (3-5, 2 R, 2B), C Hendrik Clementina (1-3, RBI, 2 BB, 2 SO) roped an RBI single to left-center, stretching the 'Tugas edge back to three, 5-2.

The Redbirds made it a two-run affair again the sixth courtesy of a SS Zack Gahagan (0-2, RBI, BB, SO) sacrifice fly, but that was as close as the visitors would get. The Waterloo, Ont. native crossed the dish later in the stanza on yet one more wild pitch.

Immediately after the league-wide off day on Monday, the Tortugas will continue their playoff hunt against the first-half champions of the North Division, the Dunedin Blue Jays, High-A affiliate of the Toronto Blue Jays. RHP Jared Solomon (1-7, 4.43 ERA) - Cincinnati's no. 23 prospect according to MLBPipeline.com - is scheduled to take the hill in the lid-lifter. Dunedin has not yet named their starting pitcher for the contest.

Following the final road trip of the season, Daytona will return to The Jack to open up a seven-game homestand and four-game set against the St. Lucie Mets, the High-A affiliate of the New York Mets. It will be a Belly Buster Monday at the ballpark, presented by Marco's Pizza. Starting at just $13, fans can enjoy all-you-can-eat hamburgers, hot dogs, pizza, and popcorn throughout the evening.

Tickets are still currently available and can be purchased online at www.daytonatortugas.com, or by calling the Tortugas' Ticket Office at (386) 257-3172.