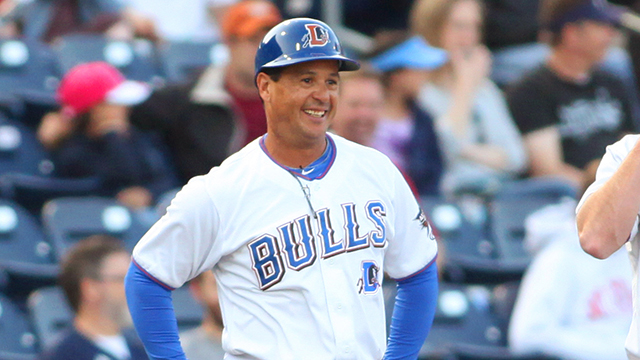 DURHAM, NC - The Durham Bulls, in conjunction with the Tampa Bay Rays, have announced eight-year Durham manager Charlie Montoyo has joined the Major League club as third base coach.

"The entire Durham Bulls organization is thrilled for Charlie," Bulls General Manager Mike Birling said. "He is the definition of a class-act, and while it's bittersweet to see him go, we're happy to see him take the next step in his career. No one is more deserving of this promotion."

The native Puerto Rican retired from playing after the 1996 season, and was hired by Tampa Bay as a minor league manager that fall. Since retiring, he has spent each of the past 18 seasons as a manager in the Tampa Bay organization, heading teams at every classification in the system.

A two-time International League Manager of the Year (2010, 2013), he also managed the International League All-Star Team on two occasions, most recently in front of his hometown crowd when he led the IL to a 7-3 win in the 2014 Triple-A All-Star Game at Durham Bulls Athletic Park. In 2009, he led the Bulls to the Triple-A National Championship title, earned Baseball America's Minor League Manager of the Year award and was named Minor League Baseball's Mike Coolbaugh award winner, honoring an individual for their outstanding mentoring of young players.

The Louisiana Tech product enjoyed a 10-year playing career as an infielder in the Milwaukee Brewers, Montreal Expos and Philadelphia Phillies organizations. His lone Major League experience came in 1993, when he spent 27 days with Montreal, appearing in four games.

The announcement comes a week after Kyle Snyder was named Durham Bulls pitching coach, replacing Neil Allen who was named Pitching Coach of the Minnesota Twins. Montoyo's replacement and the remainder of the Bulls coaching staff will be announced at a later date.