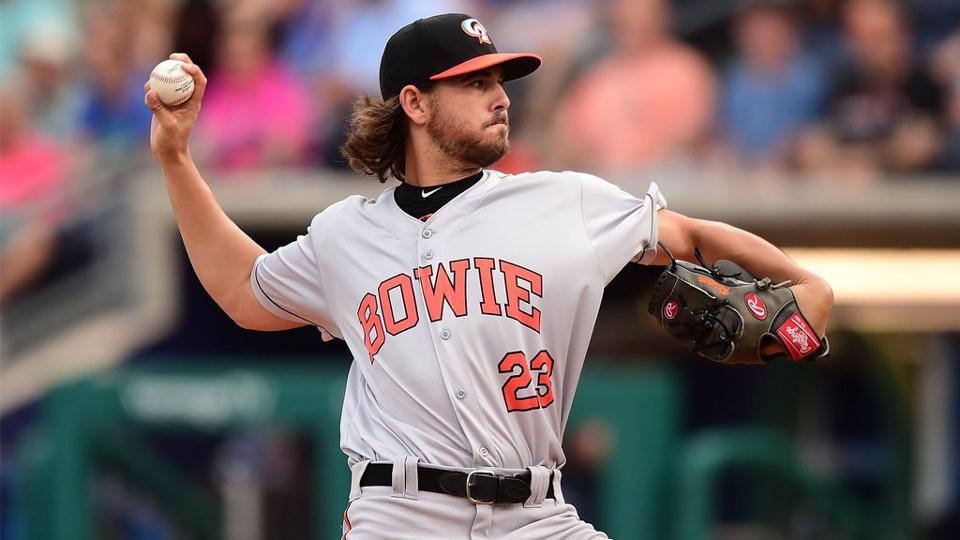 Dean Kremer has posted a 1.55 ERA in his last four starts after posting a 6.89 mark in his previous three. (Kevin Pataky/MiLB.com)

Dean Kremer is starting to get the hang of the Eastern League again, and that means trouble for his opponents.

Baltimore's No. 9 prospect allowed three hits and struck out five over seven shutout innings to lead Double-A Bowie past Hartford, 6-2, on Tuesday night at Dunkin' Donuts Park. The 23-year-old has shaved nearly three runs off his ERA by allowing one earned run in his last three starts.

A strained left oblique suffered during Spring Training threw a wrench in Kremer's final tuneup, and the results in his first few starts back in Double-A bore that out.

"I missed most of the spring and then the first [five weeks] of the year," Kremer said. "I didn't even start throwing off a mound until the end of Spring Training. When I got back up to Bowie, I realized pretty quickly I couldn't just pitch with my fastball. The guys here will hit those pretty hard. So I started refining things some more, continued to get my reps in and kept competing."

Three weeks after tossing seven scoreless frames against New Hampshire, the right-hander was in similar form in his eighth Double-A Start. Kremer (4-4) retired 10 of 11 Yard Goats and surrendered three baserunners through five innings on a walk to Vance Vizcaino and singles by Rockies No. 2 prospect Colton Welker and Alan Trejo.

Arvicent Perez's two-out double in the sixth marked the only time a Hartford player reached second base against Kremer, who worked around his second free pass to Trejo in the seventh by getting Chris Rabago to fly out to center. The Stockton, California, native tossed 53 of 88 pitches for strikes while matching his career high by completing seven innings. Kremer went seven frames June 11 against the Fisher Cats as well as last year with Class A Advanced Rancho Cucamonga and Double-A Tulsa in the Dodgers organization.

"Tonight was definitely up there in terms of the best I've felt," Kramer said. "I've been doing a good job of going out, competing and making quality pitches to quality locations. I'm trying to be less fine early in counts. If they put the ball in play, they put it in play. If I get a batter to 0-2 or 1-2, then I'll take advantage of those situations to pick up some strikeouts along the way."

"Last year was sort of a whirlwind," Kremer explained, "but I know what to expect now. Coming over during the season and finishing [with Bowie] made it easier on me [in 2019]. Instead of just knowing the guys I came over with [in the trade] and the guys from last year's Bowie squad, Spring Training gave me the opportunity to meet a lot of new people and opened new doors. Otherwise, baseball is baseball and you play the same no matter what team you're on."

Los Angeles' 14th-round pick in the 2016 Draft was promoted to Bowie on May 21 after two scoreless outings with Class A Advanced Frederick. He promptly gave up five runs over four innings against Binghamton in his return to the Eastern League and carried a 6.89 ERA through his first three Baysox starts.

His scoreless outing Tuesday lowered his ERA to 3.35.

"It was a quick reminder that hitters up here are pretty good," Kremer said. "You can't get away with being nonchalant at this level."

Hartford starter Matt Dennis (0-1) was hit up for five runs on six hits -- including four homers -- and four walks with one strikeout in four innings. He also plunked a batter during his third Double-A start. Alexander Guillen struck out seven while surrendering one hit in four scoreless frames out of the Yard Goats' bullpen.