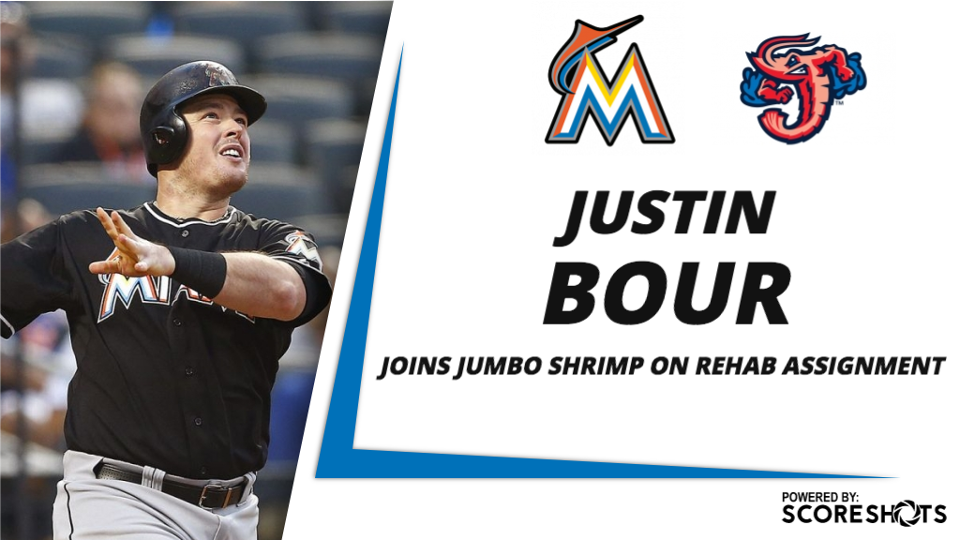 JACKSONVILLE, Fla. - The Miami Marlins announced a transaction that impact their Double-A affiliate Jacksonville Jumbo Shrimp roster prior to tonight's game against the Pensacola Blue Wahoos at the Baseball Grounds of Jacksonville at 6:05 p.m.

Miami Marlins first baseman Justin Bour has joined the Jumbo Shrimp on a major league rehab assignment. Bour is recovering from a right oblique strain, and has been on Miami's disabled list since July 25. Bour has played in 87 games for the Marlins this season, hitting .289 with 21 home runs and 63 runs batted in.

Bour's strong first half of the season had him as one of five candidates for the 2017 Esurance All-Star Game Final Vote, which was won by Los Angeles Dodgers third baseman Justin Turner. Bour did participate in the 2017 T-Mobile Home Run Derby at Marlins Park, where he competed head-to-head with New York Yankees outfielder Aaron Judge. Bour hit 22 home runs at his home park, but was edged by Judge's 23 home runs, and Judge would go on to win the derby.

This is Bour's fourth season playing in the majors with the Marlins, and he is a career .272 major league hitter with 60 home runs and 198, and he made his debut with Miami in 2014 after playing at Triple-A New Orleans. Bour was acquired by the Marlins in the 2013 Rule 5 Draft, Triple-A phase, from the Chicago Cubs. Bour was originally selected by the Cubs in the 25th round of the 2009 draft out of George Mason University.

Bour's time in the Cubs system included playing in the Southern League with the Tennessee Smokies in 2012 and 2013. Bour was a Southern League Midseason and Postseason All-Star in 2012, hitting .283 with 17 home runs and 110 runs batted in, which was second in the league. Bour, 29, is a native of Washington, D.C.

Bour is the latest Marlin to have a rehab assignment with the Jumbo Shrimp in 2017, including Adeiny Hechavarria, Martin Prado, Miguel Rojas, Junichi Tazawa, and Jeff Locke.

The Jumbo Shrimp roster stands at 25 active players, plus Bour on his rehab assignment, and a revised roster is attached.

ABOUT THE JUMBO SHRIMP: The Jacksonville Jumbo Shrimp are beginning a new era of affordable family fun with the 2017 season presented by Community First Credit Union at the Baseball Grounds of Jacksonville. With a new lineup of ticket and group options, there is a reason for everyone to get part of the action by calling the Jumbo Shrimp at (904) 358-2846 or visiting www.jaxshrimp.com.