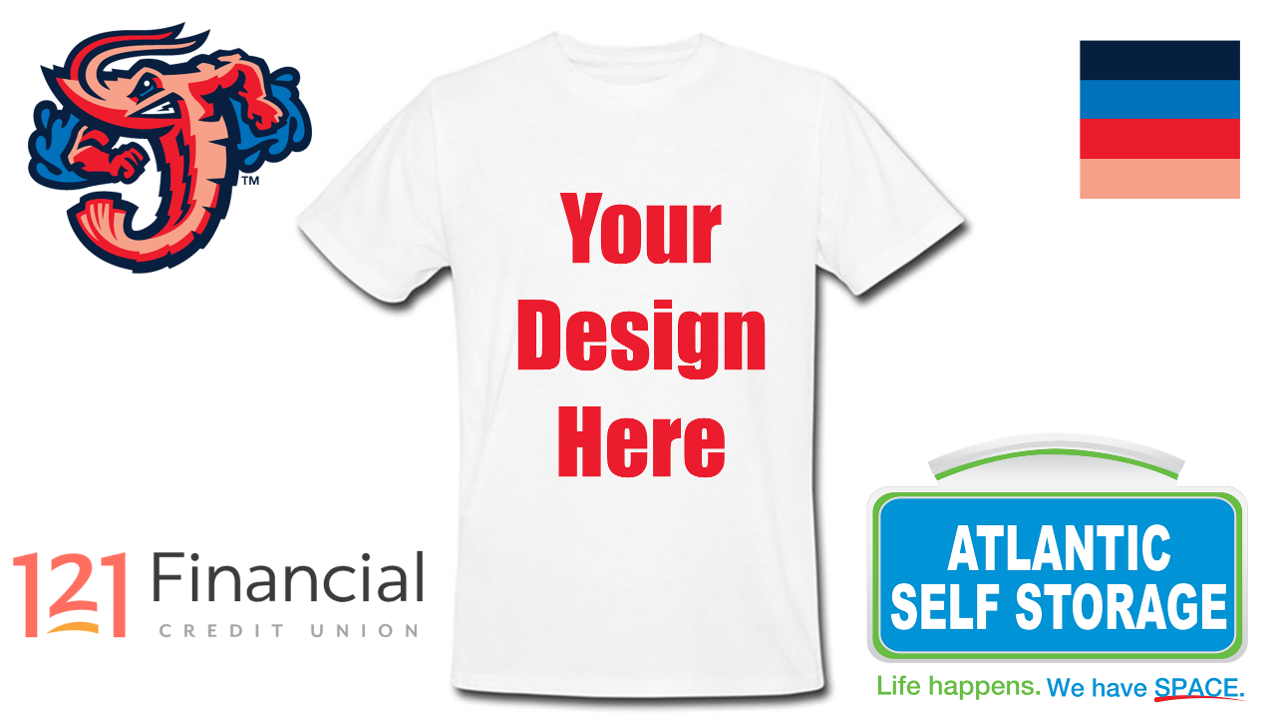 JACKSONVILLE, Fla. - Crustacean Nation can help create a Jacksonville Jumbo Shrimp T-shirt for the upcoming 2020 season. The club's contest and fan vote will determine the winning design to be printed on white T-shirts as the free giveaway, courtesy of 121 Financial Credit Union and Atlantic Self Storage, to the first 2,000 fans at the Jumbo Shrimp's home game on Saturday, April 18.

Fans may submit designs via email to win@jaxshrimp.com by 5 p.m. on Thursday, January 23. The Jumbo Shrimp will select five finalists from the submissions to be posted on the club's Facebook page (www.facebook.com/jaxshrimp), where a Crustacean Nation fan vote will take place from January 27-February 2. The winner, who will be announced on Monday, February 3, will receive 10 tickets to the April 18 game, 15 of the winning shirts and a ceremonial first pitch that evening.

Designs may be altered to fit the colors listed above.

This is the third installment of the Jumbo Shrimp's annual fan-designed T-shirt giveaway. Josh Reavis of Yulee's "Shrimply The Best" won the inaugural competition in 2017. Toni Pepe of Palm Beach took last year's contest with her "Krillin' It" design earning roughly 54 percent of the record 1,500 votes submitted from Crustacean Nation.

Except where prohibited, acceptance of any prize constitutes the winner's irrevocable consent to the publication or other use by sponsor(s) and its licensees of his or her name, biographical information and likeness in any media, including the internet, for any commercial, publicity or promotional purpose, without limitation, review or approval, or additional compensation.

By participating in the sweepstakes, each participant agrees to fully release, forever discharge and hold harmless sponsor, Jacksonville Baseball LLC., DBA (Jacksonville Jumbo Shrimp, and their respective subsidiaries, affiliates, suppliers, distributors, advertising and promotional agencies, and prize suppliers and each such company's officers, directors, employees, agents, representatives, and successors and assigns -collectively, the "released parties") from and against any claims, costs, liabilities, losses, injuries, and damages arising out of the sweepstakes, including, but not limited to, any claims for personal injury, death, or damage to or loss of property, loss of enjoyment, or any other harm whatsoever arising out of: (1) participation in the sweepstakes; (2) the quality, receipt, possession, use, or misuse of any prize; or (3) any travel or activity that is related to the sweepstakes or any prize. All artwork submitted becomes property of Jacksonville Baseball LLC., DBA Jacksonville Jumbo Shrimp. Sponsor reserves the right to change or alert coloring and/or design of winning art to make it fit printing requirements.

UP NEXT: The Jumbo Shrimp's 2020 Home Opening Day is Wednesday, April 15 against the Biloxi Shuckers at the Baseball Grounds of Jacksonville. Season tickets, mini plans and group outings are on sale now. Visit www.jaxshrimp.com or call 904-358-2846 to secure yours today.