Spinners three-run 8th not enough to hold back Renegades 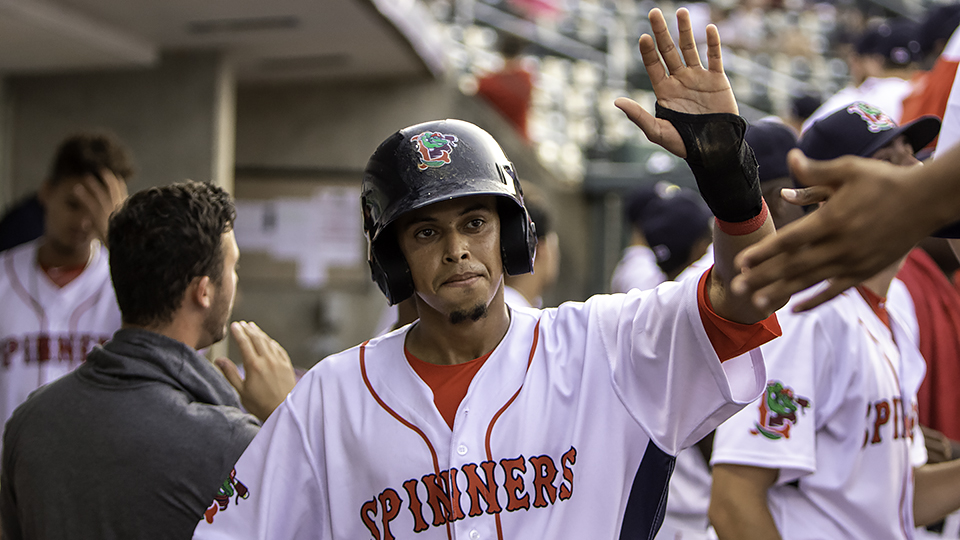 Ricardo Cubillan (44, Center) high-fives his teammates after recording an RBI-double in the bottom of the 8th inning in a 12-3 loss to the Hudson Valley Renegades at LeLacheur Park in Lowell, MA on July 20, 2019. (Jamie Arthur, Lowell Spinners Staff)

LOWELL, MA - Going into the bottom of the eighth inning, the Lowell Spinners, proud affiliate of the 2018 World Champion Boston Red Sox, trailed the Hudson Valley Renegades, affiliate of the Tampa Bay Rays, by 12 runs.

The Renegades scored all of their runs in bunches with three in the third inning, five in the fourth and four in the eighth. Despite Hudson Valley scoring four in the eighth it was Lowell that got the attention of the fans in the second-to-last frame.

In the bottom half of the inning, Antoni Flores and Ricardo Cubillan led the inning off with base hits which included a single by Flores and a double by Cubillan.

2019 draftee Luke Bandy followed with a two-run double that clanked off the center field fence, scoring both runners and making the score 12-2 - ending a run of eight shutout innings for the Renegades to start the beginning.

After Cameron Cannon popped out to second base, and Elih Marrero followed with a ground out, Marino Campana laced a single to left field - scoring Bandy from second and giving the Spinners their third run of the season.

Yusniel Padron-Artilles got the start on the mound for Lowell, but was credited with his first loss with the Spinners. Despite that he went 3.0 innings allowing three runs (all earned) on six hits, while striking out six and not walking a batter.

Lowell continues their series with the Renegades on Sunday night, which is also New England Football Night. New England Patriots running back, and two-time Super Bowl Champion Rex Burkhead will be in attendance from 4:30 p.m. - 6:30 p.m. with a VIP meet-and-greet from 4:30 p.m. until 5:30 p.m.

Burrkhead, along with The Athletic Boston columnist (and Lowell-native) Jeff Howe will be throwing out first pitches before the game officially starts at 5:05 p.m.