Redbirds Stung in Bottom of the Ninth at Fresno 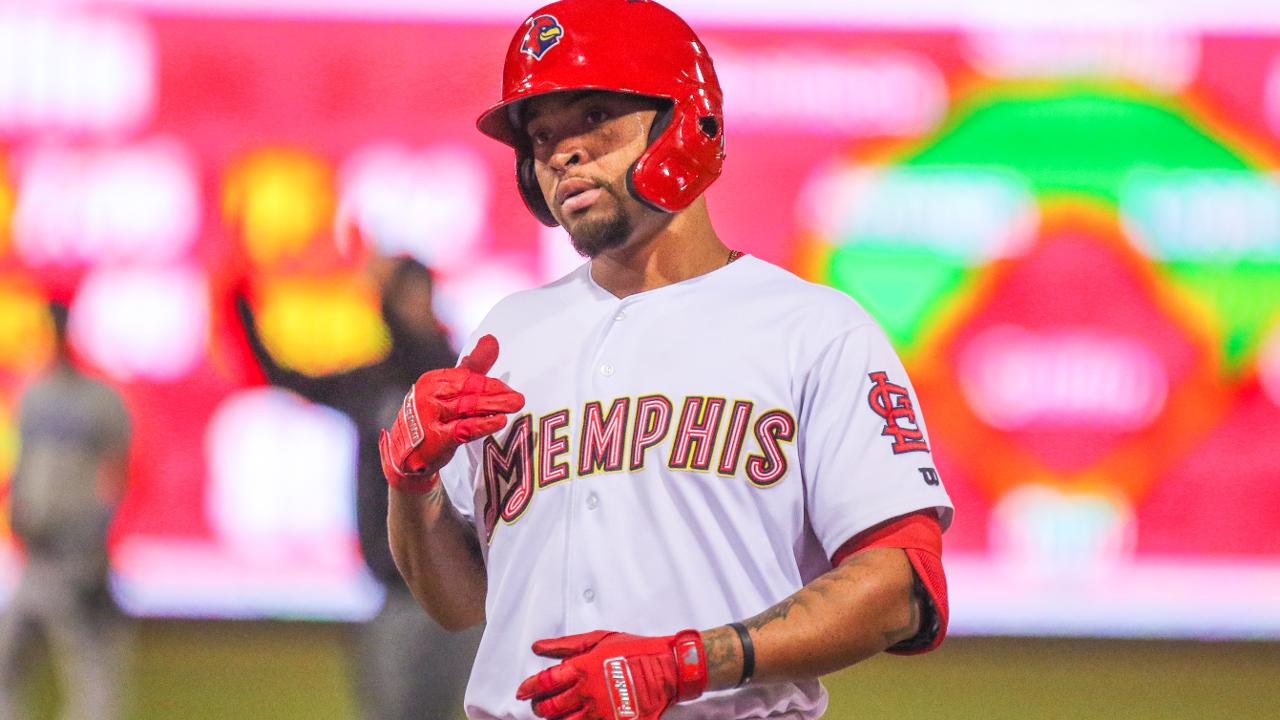 FRESNO, California - Edmundo Sosa tied the game at 7 with a two-run single with two outs in the bottom of the eighth inning, but the Memphis Redbirds were walked off in the bottom of the ninth inning as the Fresno Grizzlies (Nationals) took the series finale Tuesday night in Fresno, Calif., 8-7.

Despite the loss, Memphis (55-66) has won four of its last five games and 10-of-14 overall. The Redbirds have won six of their last seven series.

Sosa finished the game 3-for-5 with a run along with the two RBI, and he has hits in 17 of his last 18 games. John Nogowski was on base five times with a 2-for-2 showing and three walks, and he also drove in two runs. Adolis Garcia was 1-for-4 with a triple and a walk, and he also had an outfield assist at the plate.

The Redbirds scored first to start the game off, but Fresno (55-66) plated three runs in the bottom of the first inning to take a 3-1 lead. Memphis opened a 4-3 lead with three runs in the top of the third, with Nogowski singling home a run and Garcia tripling home a pair.

The Grizzlies then scored a pair of runs in both the fourth and fifth innings, and their 7-4 lead held up to a Memphis run in the seventh on another Nogowski RBI. With two outs in the bottom of the eighth inning, Sosa tied the game with a two-run single to left field that scored Max Schrock and Jose Martinez.

Nogowski walked to lead off the ninth inning, but the Redbirds could not push anything across. A walk and a hit by pitch preceded a Raudy Read double, and the Grizzlies avoided the four-game sweep with a walk-off win.

Genesis Cabrera allowed seven runs on eight hits in 5.0 innings for the Redbirds, and he struck out five. Jesus Cruz, Zac Rosscup, and Dominic Leone fired 3.0 scoreless innings for Memphis, before Chasen Shreve absorbed the loss.

Memphis returns to AutoZone Park on Thursday to start an 11-game homestand to finish the regular-season slate in Downtown Memphis.

Upcoming Games of Note at AutoZone Park
Thursday, August 15 at 7:05: Throwback Thursday presented by Polk's Meat Products featuring the Redbirds suiting up as the Memphis Chicks and throwback concession pricing of $2 beers and $1 Polk's hot dogs; College Night with $5 Bluff tickets for college students with a college ID
Friday, August 16 at 7:05: Sandlot Night with an appearance by Squints from the movie and a showing of the film after the game; All-You-Can-Eat Night specialty ticket presented by Dave & Buster's featuring an all-you-can-eat beef sliders buffet and a free $15 Dave & Buster's Power Card available at www.memphisredbirds.com/allyoucaneat; Specialty ticket that includes a St. Louis Cardinals golf umbrella available at www.memphisredbirds.com/cardinals
Saturday, August 17 at 6:35: Terminix Saturday Fireworks Show after the game; Aldo's Pizza specialty ticket with free soda at the ballpark and free and discounted food and beverages at Aldo's Pizza Pies available at www.memphisredbirds.com/aldos
Sunday, August 18 at 2:05: Prairie Farms Ice Cream Sunday (free ice cream for kids upon entering); pregame player autographs presented by Allegiant Air; kids run the bases after the game
Monday, August 19 at 6:35: the Redbirds take the field as the Memphis Música as part of Minor League Baseball's "Copa de la Diversión" series with $3 tacos and $5 Dos Equis available at the stadium