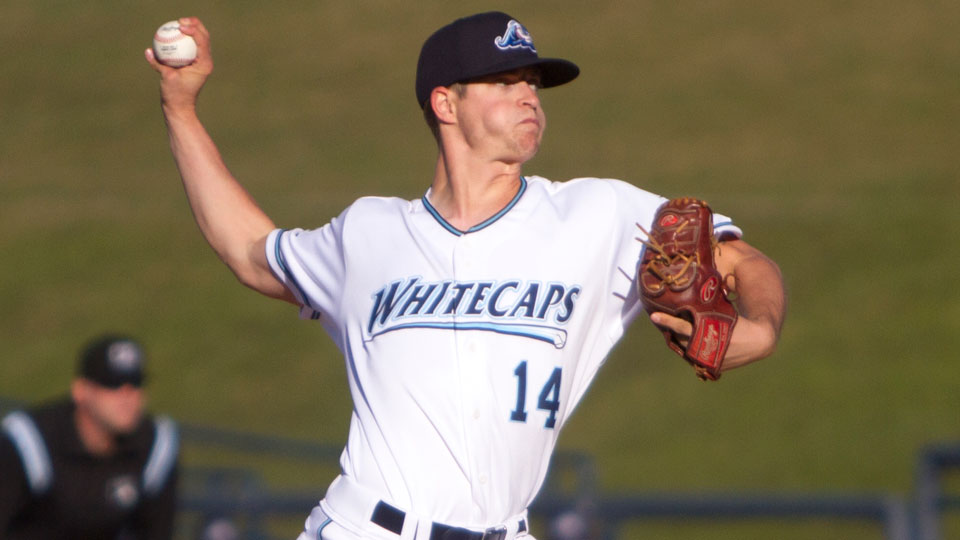 Garrett Hill has not allowed a run since last Aug. 9 in the Rookie-level Gulf Coast League. (Emily Jones/MiLB.com)

For West Michigan's Garrett Hill, every start is a zero-sum proposition. Through five starts, that has been the literal definition of his work.

Detroit's 26th-round pick last year extended his scoreless streak for this season to 26 innings while allowing one hit over a career-high seven frames Monday night in Class A West Michigan's 2-0 victory at Fifth Third Ballpark. He struck out six and walked one.

Hill actually has run his string of zeros up to 33 1/3 innings, counting his final 7 1/3 frames last year with the Rookie-level Gulf Coast League Tigers West.

"The game plan for every start is to look to see who is hot [for the opposing team] and try to execute my pitches," he said. "[Sam McMillan] has been behind the plate for most of my games this year, and we have been on the same page. It's a case of going out there and trying to get weak contact."

In his fifth start this season, the 23-year-old held the Chiefs hitless for 6 2/3 innings. He retired the first six batters before working around plunking Alexis Wilson and walking Brandon Riley in the third. From there, Hill went on cruise control.

The San Diego State product retired 13 in a row before Lars Nootbaar lined a 2-2 pitch into left field for a two-out single to break up the no-hit bid. Hill (2-0) ended the inning with his sixth punchout, finishing with 99 pitches, 66 for strikes.

"If a guy gets on base, yeah, I will look for a strikeout, so there is no chance for anything to go wrong -- a hit, an error," he said. "I want to get the out as quickly as possible."

The 2018 Mountain West Co-Pitcher of the Year at SDSU says there is not much difference between playing Division I baseball and suiting up as a pro.

'"I don't even try to think of it as a job. I just want to do what I've been given the opportunity to do," Hill said. "At the end of the day, just like college, these [hitters] are strong. As long as I'm throwing strikes and getting outs, there's not much difference."

After hitting for the cycle Sunday, West Michigan's Ulrich Bojarski belted a two-run homer off Chiefs starter Kyle Leahy (1-2) in the seventh. The right-hander allowed four hits and three walks while striking out two in six innings.

"I don't think about the streak," the California native said. "I go start by start. The streak is not on my mind. I just try not to let anyone score, just put up zeros."

Right-hander Angel De Jesus worked out of a bases-loaded jam in the ninth to earn his second save. He allowed two hits and a walk while striking out four across two frames.

John Valente went 2-for-4 with a run scored for West Michigan.