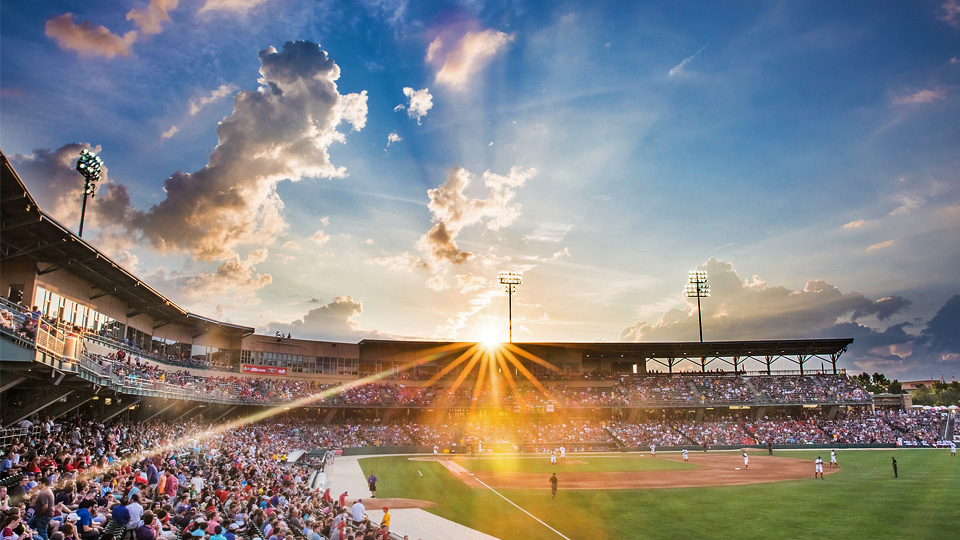 The sun sets over Victory Field on July 29 during an International League game in Indianapolis. (Adam Pintar/Indianapolis Indians)

A stormy summer day in Indianapolis turned out pretty well for both Adam Pintar and the Indians.

"I remember that day fairly vividly," Pintar said. "I was oblivious to the sunset as it was happening."

Pintar, who works as the Indians' creative services manager, also helps out as a photographer during home games at Victory Field. He recalled it rained for much of the day on July 29, but the skies cleared during an International League game that evening against Norfolk. He grabbed his camera and tripod, made his way out to right field and framed a picture of the sun dipping just below the roof of Indianapolis' 20-year-old ballpark before a 12th-inning walk-off win.

"It was definitely one of my stronger photos," he said. "Probably the strongest photo that wasn't action."

"It's incredible. It's really the first real award I've won for photography," Pintar said. "I haven't always been a photographer -- I picked it up in 2012. It was by happenstance that I became a photographer. I didn't have anything to do on game day, so I grabbed my old 15-year-old camera to have something to do. It grew from there."

Pintar's image of a warm sunset over Victory Field edged finalists that featured a variety of images, from diving infielders and walk-off celebrations to fireworks and even a rival sunset over Coney Island.

"I thought there was a lot of strong competition out there with a lot of those photos," Pintar said. "A good photo needs to be able to tell a story, and some of those were in there and that's why I feel so honored to have won. Those aren't hack photographers I'm up against. To be the photographer who took the best photo of the year, that's a big honor. The competition was strong."

Pintar's snap had two main contenders: Kamp Fender's photo of fireworks in Birmingham and Joe Territo's capture of an infielder in mid-air, diving for a line drive.

Pintar said his photo helps tell a story, one he detailed upon the win. He said the image was taken on a rainy day in Indianapolis after co-workers asked him to shoot sunset and show fans the weather had cleared.

"I ran upstairs to get my tripod, change lenses and then ran out to right field," he said. "It's an HDR photo, where you take three exposures and you combine the photos to get the high dynamic ranges with the highlights and shadows. I spent a good 20-30 minutes out there, waiting for the sun to get just right, and shot it at a high aperture. And that's why you get the starburst on the sun."

He said the club took to social media to promote voting for both his image and for Tyler Glasnow, an Indianapolis right-hander who was nominated for the Top Starting Pitcher MiLBY.

"Photos go a long way -- people are really drawn to them. It makes our job so important, that people can be at the ballpark when they're not here," he said. "We did a lot of campaigning on social media, and I told my family and friends to go vote."

Pintar said the recognition made all his long hours and hard work feel justified.

"Having won something that means something is really quite an honor," he said.