D-backs No. 26 prospect completes feat for second time in 2019 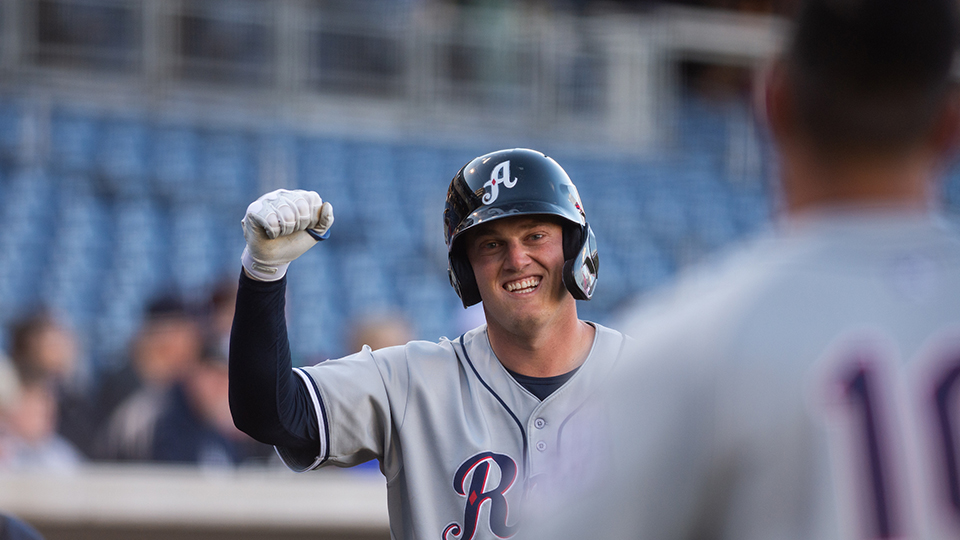 Kevin Cron has belted 58 home runs in the Pacific Coast League over the past two seasons. (Reno Aces)

On a night in which Kevin Cron set Triple-A Reno's all-time home run record, he added another personal milestone to an ever-expanding list.

Arizona's No. 26 prospect went deep three times for the second time this season and drove in five runs, but the Aces fell to Oklahoma City, 10-6, on Tuesday at Chickasaw Bricktown Ballpark. Cron has racked up four three-homer games over the past three seasons.

Even though he's accomplished this piece of history a number of times in his career, he said each game had its own unique flair.

"Obviously a special night, everyone single one is a little bit different," Cron said. "It's always good to go out there and perform well and have a little fun while you're doing it."

The 26-year-old went yard in the first two games of the series against the Dodgers, then was 0-for-4 on Monday. Cron quickly turned that around in the first inning of Tuesday's contest against knuckleballer J.D. Martin.

After a walk to No. 30 D-backs prospect Domingo Leyba, the 2014 14th-round pick worked the count full against the right-hander. Cron unloaded on the sixth offering, sending it over the left-field wall. It marked his 56th career homer with the Aces, a new team record.

"It was awesome, I didn't even really know about the Reno career home run record. I think my hitting coach [Jason Camilli] congratulated me in the dugout," Cron said. "I think I asked him, 'For what?' And he told me, so that was kinda cool to find that out. I think that might have been after the first one, but then it was good to get those other two."

He grounded out in the third, but in the fifth attacked Martin's first pitch and deposited it over the wall in left for a solo shot. Facing a knuckleballer has its challenges, and Cron admitted he and the team will rarely face one during the season. So his plan was to find something as high as he could handle and take a hearty cut. Sure enough, the first pitch of the third at-bat was in the happy zone.

"You don't necessarily have a solidified approach to attack those guys," Cron said of knuckleballers. "It's a lot of conversations in the dugout, how different guys are attacking him and who's having the success and what's he doing against this guy and how we can all figure out a plan for a guy that we don't face more than once every couple of years."

Righty reliever Josh Sborz didn't fare much better against the California native in the seventh. Cron, facing a more traditional hurler, got all of a pitch down the middle of the plate and drilled a no-doubt homer to left.

No stranger to the long ball with a Pacific Coast League-best 36 roundtrippers, the first baseman has two three-dinger games this season. On April 26, he and teammate Tim Locastro each belted three long balls in a 15-5 win over Fresno. With Reno last year, Cron smashed three homers in a duel with Salt Lake's Jabari Blash, who also went yard three times in the June 27 slugfest. He hit the milestone for the first time on April 8, 2017 for Double-A Jackson.

Each of the efforts had a different feel, but remain memorable for Cron.

"I think the one against Blash, we kind of blew them out," he said. "The one with Timmy was a little bit of a competition while we were pretty comfortably in the lead and trying to have a little fun, a little teammate competition.

"This one, it was big at-bats, trying to get back in the game. I think that's what makes it so special because there's different moments. Tonight's was cool because it was able to get us back into the game and give us a chance to win, but unfortunately we weren't able to do that."

The first baseman struck out on four pitches against Kevin Quackenbush in the ninth to end the contest.

Baseball's No. 10 overall prospect Gavin Lux went 2-for-4 with a run scored and raised his PCL average to .434. No. 13 Dodgers prospect DJ Peters, Connor Joe and Zach Reks rapped out three hits apiece to help the Dodgers take the win. Peters scored three runs and drove in two, Joe plated five and Reks added a run and an RBI.