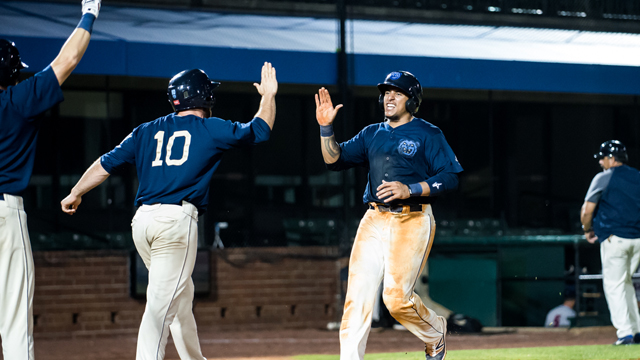 PENSACOLA, Fla. (August 10, 2017) - After falling behind 4-0 in the first inning, the Mobile BayBears, the Double-A affiliate of the Los Angeles Angels of Anaheim, rallied back and held off the Pensacola Blue Wahoos for a 10-9 victory in the series opener Thursday night at Blue Wahoos Stadium.

Jose Briceno got the comeback started with a three-run homer in the second inning, cutting Pensacola's lead to 4-3. The BayBears (54-61 overall, 24-22 second half) surged ahead with four runs in the third, knocking Keury Mella (2-10) out of the game. Zach Gibbons and Briceno capped off the inning with back-to-back RBI doubles.

Nick Senzel hit a pair of home runs for the Blue Wahoos (61-55, 21-25) in the first and fifth, and he matched his career-high with four RBI.

Pensacola nearly came back from a four-run deficit as well. With the BayBears leading 10-6 entering the ninth inning, the Blue Wahoos loaded the bases and scored two runs on sacrifice flies to center field. Aristides Aquino greeted new pitcher Abel De Los Santos with an RBI single, but Chad Tromp flied out to end the game. De Los Santos, who was a member of the Blue Wahoos last year, notched his third save of the season for Mobile.

The BayBears continue the five-game road series against Pensacola Friday at 6:35 p.m. CT. Right-handed pitcher Grayson Long (7-6, 3.01 ERA) is scheduled to make the start for Mobile against righty Deck McGuire (9-8, 2.75 ERA) for the Blue Wahoos. Live coverage can be seen on MiLB.tv (Pensacola feed, subscription required, promo code: BAYBEARS) and heard on the BayBears Broadcast Network, the TuneIn Radio App, and the MiLB First Pitch App, with the Countdown to First Pitch starting at 6:15 p.m. CT.

The BayBears host a total of 70 home dates through Labor Day, September 4. Single-game tickets and ticket packages are currently on sale. Season tickets and group and hospitality offerings for the 2017 season can be reserved by calling (251) 479-BEAR (2327).

The 2018 BayBears schedule has been released and is available by clicking here. Game times and promotions will be announced at a later date.