On the Road: Before Sod Poodles, Gold Sox 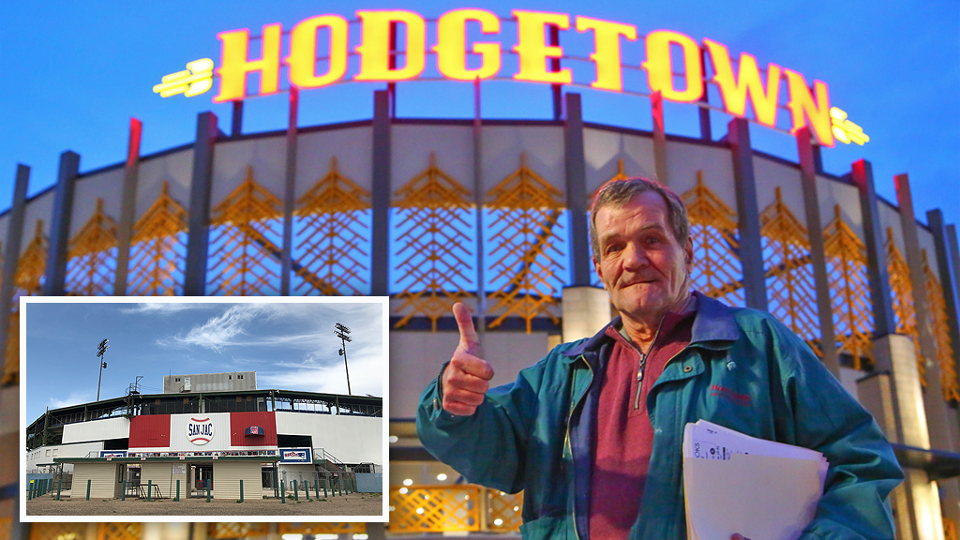 Mike Higgins, who once worked for the Amarillo Gold Sox at Potter County Memorial Stadium (inset), gives a thumbs-up to HODGETOWN.

Amarillo, Texas, is no stranger to Texas League baseball. Before there were the Sod Poodles, there was the Gold Sox, the Giants and the Sonics.

The Sod Poodles, playing their first season in a new downtown ballpark that goes by the all-caps name of HODGETOWN, mark the return of Minor League Baseball to Amarillo after a 37-year-absence. The city's previous Texas League entities all played at Potter County Memorial Stadium. This facility, now 70 years old and in generally poor condition, went on to host a variety of independent league teams and currently serves as the home of a private high school team.

HODGETOWN and Potter County Memorial are located only two miles away from one another, but visiting one after the other leads to the impression of having set foot in two very different worlds. It's old versus new and downtown versus desolate. To get a sense of the Potter County Memorial Stadium Minor League Baseball experience, I spoke with Amarillo native Mike Higgins. Higgins, a lifelong baseball fan and local baseball historian, attended his first Amarillo Gold Sox game at the age of 6 in 1963. That club, a Chicago Cubs affiliate, left town after the season.

"We did not have a team in '64. I really started going in '65, when the Astros came in and then we were with Houston for three years [as the Sonics] and San Francisco for seven years" said Higgins. "And I wound up being the Amarillo Giants team photographer."

Higgins has kept plenty of memorabilia from those days, including a local newspaper article recapping the 1970 season finale between the Amarillo Giants and the visiting Dallas-Fort Worth Spurs. The article mentions that, the night before, "vandals broke into Memorial Stadium during the night and turned on the sprinkler system. As a result, the start of the game was delayed 53 minutes while attempts were made to dry out the muddied infield."

What the article doesn't mention, because it wasn't known at the time, was that the "vandals" in question were the players themselves. Higgins, in part of an Amarillo baseball history article in the Sod Poodles media guide, wrote that "members of the Amarillo Giants and [Dallas-Fort Worth] Spurs ran into each other in an Amarillo bar and began banging heads about how they could avoid playing the final game. ... The group headed to the ballpark, sneaked in and turned on the sprinkler system in an attempt to flood the field."

This attempt backfired, as "Giants general manager Chuck O'Malley enlisted the help of lots of sand, manpower and a Potter County helicopter to dry out the field. ... Among the culprits was Dallas-Fort Worth second baseman Ron Shelton, now a highly successful Hollywood screenwriter. He recounts the prank in his 1988 classic 'Bull Durham.'"

Clearly, it was a different era.

"The Giants in the late '60s and early '70s were a very poorly run organization from top to bottom. And they did not spend anything on the [Potter County Memorial Stadium] field," Higgins said. "One day, the groundskeeper was watering the grass. The owner comes running out and says, 'Turn off the water! We can't pay the water bill."

Higgins experienced the realities of this era most poignantly in 1976, when he served as the Amarillo Gold Sox public relations director. That iteration of the Gold Sox, which lasted through 1982, were, like the Sod Poodles, a Double-A affiliate of the San Diego Padres.

"My title was director of public relations, but working in Minor League Baseball at the time, that's a glorified name for a gofer," he said. "Writing a press release one minute and then rushing to the restroom to replace some toilet paper or pull the tarp off of the field or whatever."

Higgins said that, despite budget constraints and general fan apathy, the Gold Sox organization was ably run by John Dittrich.

"During the Giants years, especially from '68 to '74, there was a lot of turmoil in society as a whole," he said. "The country was pretty apathetic about sports but especially for some reason about baseball. And it's almost like the Giants didn't even bother to promote. But in '76, when the Padres came here, John Dittrich came in as our general manager. He just recently retired from a long career working in the Minors and he did put a lot of thought and energy into some pretty cool promotions for the time."

Dittrich's promotions included "Guaranteed Win" nights as well as a "Good Old Game" night that simply promoted the fact that "a baseball game was going to be played." More ambitious was the team's attempt to commemorate the one millionth fan in Amarillo's Texas League history.

"There was a special prize for the millionth fan, a 1959 car. It was a '59 in honor of our first year in the Texas League," said Higgins. "Our operations guy pulls out there, turns it off and hands the keys to the winner. The winner gets in, and the car wouldn't start. We had to push it off the field."

Dittrich departed after the 1976 season to take a job as the assistant to National Association of Professional Baseball Leagues president Bobby Bragan. Higgins described Dittrich's replacement as "inadequate" before relating the following story.

"The Gold Sox were playing a doubleheader and the owner told the clubhouse guy to go to Kentucky Fried Chicken and pick up some chicken for the players for between games," Higgins recalled. "So he goes to pick it up and asks the [restaurant] manager, 'How much do I owe you?' He says, 'You don't owe me anything. Your owner asked me to give you yesterday's chicken so that he wouldn't have to pay for it.'"

Dittrich returned to Amarillo in 1979, but the end was near.

"The team was losing money and John just had to sell," said Higgins. "They sold the team to a guy from Beaumont, Texas, and he actually owned the team in '81 and '82 while they got the stadium ready in Beaumont. As far as affiliated ball, I didn't think it'd ever happen again in Amarillo, ever." 2019 MiLB include

It may have taken the better part of four decades, but Minor League Baseball is back in Amarillo. The Sod Poodles have drawn nearly 263,000 fans over 42 openings, approximately three times as many as the Gold Sox could hope to draw over the course of any given season.

"[HODGETOWN] has a team store that has everything Sod Poodles. I seem to recall that, outside of programs, the only thing we sold during the Gold Sox years were pennants," Higgins said. "Our concessions were just the basics, and now you've got everything imaginable. I never thought we'd see a stadium of this caliber."