Catch partner Holmes has baseball in his blood

Author Ethan Bryan’s latest book, A Year of Playing Catch, will be released Sept. 8. In anticipation, each week we are giving fans a sneak peek into a few stories incorporating our own MiLB teams. Want to get in on the fun? Submit your photo or video to the Play

Author Ethan Bryan’s latest book, A Year of Playing Catch, will be released Sept. 8. In anticipation, each week we are giving fans a sneak peek into a few stories incorporating our own MiLB teams. Want to get in on the fun? Submit your photo or video to the Play Catch Sweepstakes presented by Peerless-AV® for your chance to win a Peerless-AV® Neptune™ UHD Outdoor TV and Outdoor Universal Tilt Wall Mount!

There are no givens. Not in life, and not in baseball.

It's part of what makes the game great. On any night during an ordinary season, show up at your local Minor League ballpark and you might see anything and everything. A no-hitter. A player hit four home runs. A mascot whip out unprecedented dance moves. An opossum challenge an outfielder to a faceoff ... for a second time.

Of course, it's also part of what makes the game a heartbreaker. You can be sure this is your team's year, only to watch everything fall to pieces in the stretch run. Mighty Casey strikes out. And, as a great and many kids come to learn sooner or later, loving baseball doesn't always translate to opportunity on the field.

That was a lesson Brett Holmes refused to learn in high school. The grandson of a Gold Glove-winning outfielder and World Series champion (you'll find out who below, as Ethan Bryan details the game of catch he played with Holmes on a winter's day), Holmes could have been forgiven had he hung up his spikes after a dose of rejection in the ninth grade. And again the next year.

Instead, he kept loving baseball. He kept working. He worked his way onto a Division I team at Auburn University, and he worked his way into being drafted by a Major League organization. He persevered. He kept going, and he got farther than would have seemed possible when he got his first rejection. And his second rejection.

It's a reminder of the power of perseverance. Because this swings the other direction, too: There are no givens. Not in life, and not in baseball.

The following is from Ethan Bryan's blog, which details his experiences from "A Year of Playing Catch":

Aside from the temperature hovering around the freezing mark, there is absolutely zero wintery weather in Springfield. No ice. No snow. No signs of Frosty anywhere.

The sun was out and so was the wind and the right field bullpen fence at Meador Park was on the ground. I don’t know if it’s a result of last week’s storms or just under repair, but the open access to the field made it tempting for a game of catch on the outfield grass.

No one would know.

Besides, it’s a city park.

I decided against it.

Baseball is in Brett’s blood, but he didn’t make the high school team his freshman year. He didn’t give up, but then didn’t make the cut his sophomore year either. As a junior, he made the junior varsity team, then made the jump to varsity and stayed there.

After four years of playing college ball in the south — “I really didn’t want to play in weather like this” — Brett was drafted by the Pirates in the 20th round. He played 34 games in the Class A Short Season New York-Penn League for the Williamsport Crosscutters. That first year, his team won the championship.

“It was the only championship I’ve ever won.”

An outfielder like his grandpa, Brett played for the Crosscutters a second season, then played one season with the Hickory Crawdads in the South Atlantic League.

“Baseball teaches you to trust those around you. You don’t have to do everything on your own. You have teammates who are there to pick you up.”

We played catch in the open grass field behind the broken fence where once a small field existed and my little league team played. The conditions weren’t ideal, but they weren’t awful either.

Brett told me a story about Spring Training in Florida and how nice it was to spend time with his grandparents during meals instead of eating in the cafeteria or picking up fast food. While Brett was working on staying on top of throws to the plate on the Minor League fields, his grandpa was giving the Major Leaguers a few pointers.

And, like his grandpa, he’s still finding ways to do good through the game. This past summer, he helped coach his 6-year-old daughter’s softball team.

“It was a good experience. Next year, I think I’ll be a head coach.” 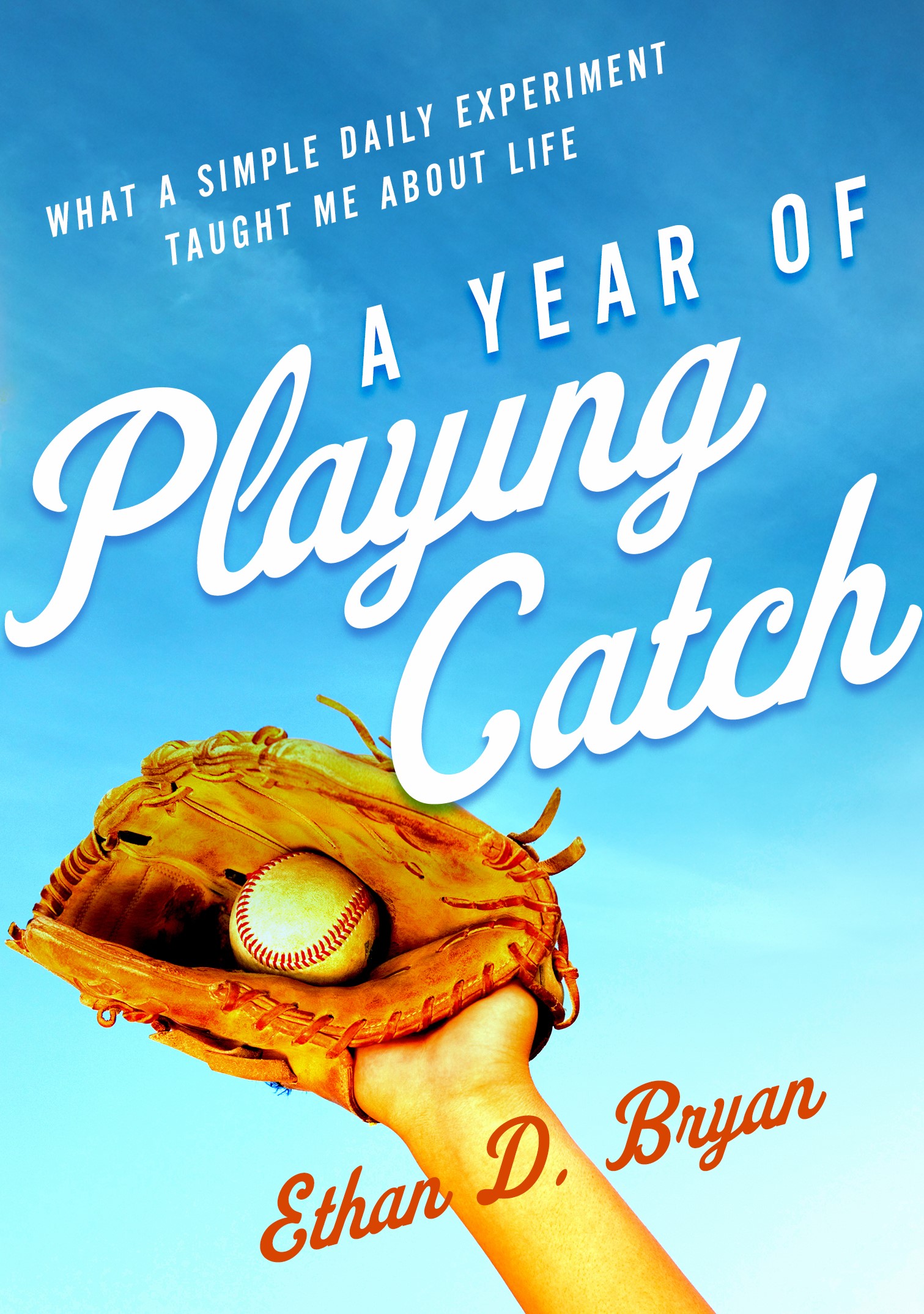 Ethan D. Bryan is convinced that good stories bring people together. His baseball stories have landed him an invitation to the White House, an invitation to speak at the National Baseball Hall of Fame, and brief appearances in two documentaries.

Ethan lives in Springfield, Missouri, with his wife, Jamie, and daughters, Kaylea and Sophie. He still dreams of playing baseball for his beloved Kansas City Royals. His writing can be found at ethanbryan.com or on Twitter @Ethan_Bryan.

A Year of Playing Catch is available Sept. 8. Order from your favorite local bookstore or anywhere books are sold (Amazon, Barnes & Noble, Bookshop).