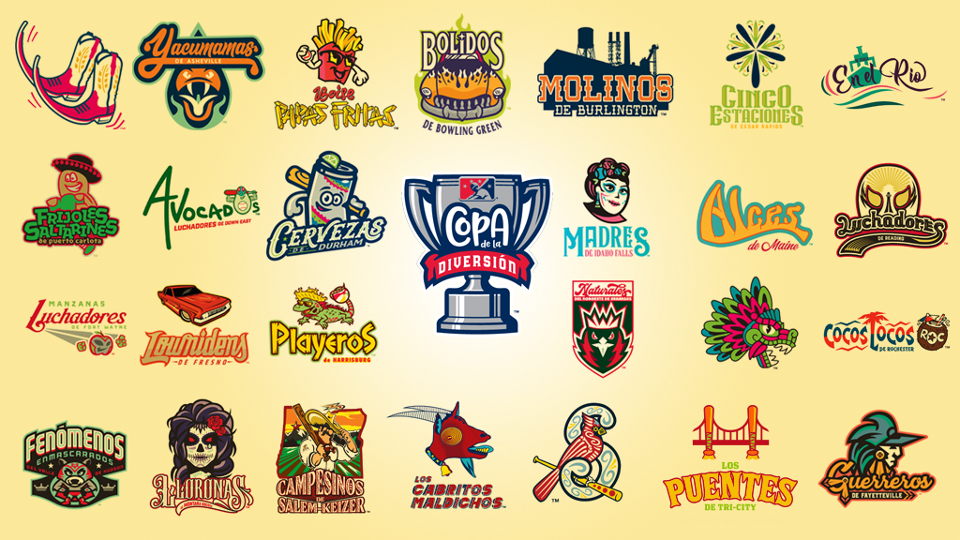 With 22 new participants next season and four updated looks, the Copa de la Diversión initiative has nearly tripled in size since 2018.

This is community service and engagement. These are new identities and recharged returning concepts. This is Copa 3.0.

Minor League Baseball's award-winning initiative of cultural engagement with Hispanic and Latinx communities across the country, Copa de la Diversión returns in 2020 for its third season with more teams than ever. A total of 92 franchises will participate in the Copa program next year -- up from 72 in 2019 -- with the complete collection of new team names and eye-catching logos rolling out Thursday afternoon.

"It's a testament to our continued commitment," said Cory Bernstine, Minor League Baseball's director of marketing and business strategy. "It wasn't a one-and-done thing. 2017 kind of marked our first foray into this, where 'Es Divertido' [MiLB's overarching Hispanic initiative] made us realize that we needed to connect with this consumer group, and that we could do it in a new and creative way. In 2018, Copa launched with 33 teams. When you go from four [in 2017] to 92, there's a lot of best practices that teams are starting to notice."

Learn about all the Copa logos »

The season-long competition among clubs -- designed to engage, embrace and honor Hispanic and Latinx culture -- has become a phenomenon since its debut. Now Minor League Baseball and participating teams are dreaming even bigger.

"I think in the 3.0 era, it's how can we go deeper in these communities? That's through direct relationships with community and civic organizations. In 2019, the participating teams partnered with 200-plus local Hispanic and Latino organizations," Bernstine said. "The hats are great. The brands are amazing, but it's really this impact that we're seeing locally that's driving a long-tail effect in fan engagement."

Last year's Copa universe was a revelation. With more than double the teams from 2018, attendance exploded across the country as roughly 1.8 million fans attended the nearly 400 Copa games played in 2019. (There was nearly 20 percent higher average attendance per Copa game versus the average per-game attendance.) The initiative was also named a finalist for Sports Business Journal's Sports Breakthrough of the Year Award, and while data is still being compiled, total charitable contributions appear to have topped $400,000.

"In 2020, I think we'll see new partners continue to resonate in the marketplace," Bernstine said. "We're not just going to slap someone on there. It has to make sense and it has to enhance the initiative for the league and the teams."

Most importantly, Copa has struck a chord with fans.

"We went to a [Bradenton] Barbanegras game, and one of the interactions I had with one of the fans is that they were from Venezuela and had been in Bradenton five or 10 years," said Chanel Zapata, MiLB associate of marketing strategy and research. "They said to me, 'I thought the stadium was a place for me not to even step foot. But even the change of music to more Latino-friendly songs made it feel so I could take my family to a ballgame. It reminded us of the really good times we had when we were in Venezuela.'"

In addition to tangible elements like attendance and merchandise sales, Minor League Baseball has tried to measure Copa's impact on an emotional level. Through a fan research study, when asked for three descriptors of their clubs' Copa initiatives, the top responses were celebration, inclusion and representation.

"It's community impact and storytelling," Bernstine said. "How can we continue to tell all these stories? Every time we tell somebody about Copa, it's usually received very well. It's received as intentional, authentic, creative, fun, fresh. Basically, how do we infuse this Hispanic culture into the world of Minor League Baseball? We tip our hats to the clubs. They took this idea and brought it to life."

In addition to its outward elements, Copa is a comprehensive internal program for teams.

"We're providing some parameters but allowing the teams to flex their creative locally because they know their market better than anyone," Bernstine said. "Part of that is, are you hiring bilingual staff? Are you going out to the community and [engaging with] organizations and going to them versus expecting them to come to you? A lot of groups are working with these organizations on the development of the logo itself, so it's not just three people tucked away in an office. They're actively going out in the community to solicit feedback and have a candid conversation about it."

Those conversations have contributed to each new building block in the Copa universe.

"We are driving revenue, we are reaching new fans and existing fans, but we're very much looking at it from a long-term view as well, understanding the changing dynamics of the country," Bernstine said. "We view it as an opportunity -- even a responsibility -- to be better in this space, to make it inclusive, to make it accessible and to make it fun."

When 22 new teams taking the field under Copa identities in 2020 among the 92 total participating clubs, they will be part of one of MiLB's most visually stunning and impactful programs in memory. New squads added to the fold include the fun (Pointy Boots de Amarillo), the wacky (Manzanas Luchadores de Fort Wayne) and the poignant.

"I personally love [Rookie-level] Rocky Mountain," Zapata said. "They're La Llorona, a folk story about a woman who dies in a car accident and is a ghost taking away children. I think that ties right into the theme of the Vibes, the whole campfire, 'Let's tell scary stories.' I love that one in particular."

"It's probably not the most kid-friendly," Bernstine added with a laugh, "but in terms of being culturally relevant, it is a huge cultural icon."

Beyond the new additions and several returning Copa clubs rebranding themselves, other teams have gone different creative routes, like the Fresno Grizzlies, whose updated Lowriders logo was inspired by a "People's Choice" award winner from their 2019 Copa campaign.

"The San Antonios of the world, the Albuquerques of the world, they will crush it, and they have crushed it," Bernstine said. "What we've been really excited about is seeing the Hillsboros of the world, Charleston, West Michigan, Louisville, Columbus. You're seeing this distribution of authentic fan engagement that I think is really kind of a core pillar of the program for us.

"Word is traveling now. Teams are talking to each other. There are certain leagues where almost all the teams in that league are participating, like the California League. You've seen a lot of this one-upmanship of wanting to do things better but also just kind of talking peer to peer about what Copa has done for their team and their community."

At the Winter Meetings next month, the 2019 winner of Copa's overall award will be revealed and the chase will begin anew for next year. MiLB is working with a council of Hispanic leaders on the concept of expanding its award recognition and celebration in the future.

"Everything potentially from best community partnership or engagement to best unveiling to best gameday experience," Bernstine said. "Because a lot of teams are doing a lot of good things and we want to not give everyone a trophy -- that's not our intent -- I think it's because there are so many good things, it warrants more spotlight on those great efforts."

Copa de la Diversión is just getting started as one of the most important elements of Minor League Baseball's community-centric strategy of driving positive social impact, embracing the cultural elements of the game and all its fans, emphasizing diversity in the business of baseball and, as with all threads of MiLB's identity, doing it in the most fun way possible.

"Everyone is super-excited," Zapata added. "I get emails [from teams] all the time asking, 'How can I be in Copa 2021?' It's contagious. They're happy to do it. They're excited."