Pache, Waters next in line for Atlanta

A bountiful crop of prospects has the Braves sitting pretty 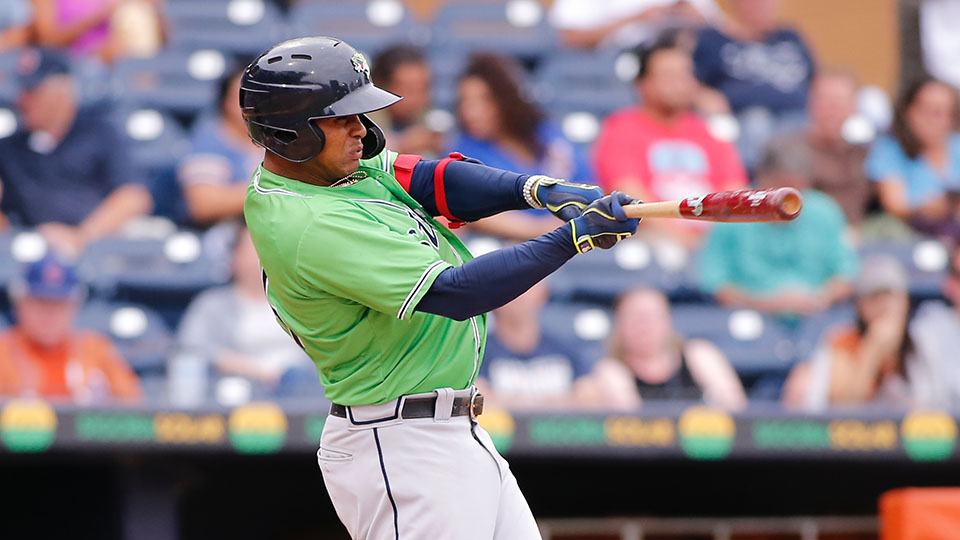 If anyone wondered how long it would take the Braves to get into position to reprise their dynasty of the 1990s, the answer is not long. Buoyed by a pipeline of homegrown talent that appears endless, Atlanta captured its second consecutive National League Eastern Division title in 2019. Its 97 wins amounted to the franchise's highest total since the 2003 squad finished 101-61.

While the Braves' return to prominence didn't come without a price -- including four consecutive losing seasons from 2014-17 -- a farm system that had become surprisingly stagnant in previous years was rejuvenated over the course of the seasons of struggle. The 2019 club features youngsters such as Ronald Acuna Jr., Ozzie Albies and Mike Soroka, among others. The line doesn't end there. At the conclusion of the Minor League season, five Braves -- Cristian Pache (11), Drew Waters (23), Ian Anderson (31), Kyle Wright (35) and Shea Langeliers (63) -- were on MLB.com's Top 100 Prospects list.

"We continuously look for players that have ability but also a high aptitude, who can learn at a fast pace," said Braves director of player development Dom Chiti. "Those are some good ingredients for a Minor League system to have, and it makes our work much easier."

Catcher -- Alex Jackson, Gwinnett (85 games), Atlanta (four games): Jackson slugged a career-high 28 home runs, made his Major League debut and remained one of the Braves' top prospects, checking in at No. 25. Jackson exceeded his personal best of 19 homers while his 65 RBIs equaled a career high set across two levels in 2017. Blessed with strong catch-and-throw skills, the 23-year-old threw out 50 percent of would-be basestealers in 2019, more than a 20-point increase compared to 2018.

"Alex made a lot of strides for us in 2019," Chiti said. "He became more of a well-rounded player during a season full of positives. It was nice to see him really come on with the bat, which was a big thing for us coming off the previous year. Even with [a left knee sprain], we don't foresee any lingering issues after he rests up and completes his rehab over the winter."

"Bryce has big-time power, and we saw that this summer," the son of former big league catcher Harry Chiti said. "We drafted him as an offensive player, but his defense has come along nicely. We had him participate in our instructional league after the Minor League season ended, and he's made great strides over [at first base] with the glove. He's a guy to keep an eye on."

Second baseman -- Greg Cullen, Rome (130 games): His numbers don't jump off the page like those of some of Atlanta's more heralded prospects, but Cullen has put together consecutive strong campaigns to begin his pro career. The 22-year-old has shown good patience at the plate, evidenced by 100 walks leading to a .387 on-base percentage in his first 185 professional games. A .787 OPS and .273 batting average lends credence to the club's belief that the lefty-swinging second baseman has the potential to be an above-average hitter with better-than-expected potential for extra-base hits.

Third baseman -- Austin Riley, Atlanta (80 games), Gwinnett (44 games), Rome (three games): His position blocked by the signing of free agent Josh Donaldson, Riley made the switch to the outfield in 2019 -- in the Majors. Prior to that, the 22-year-old was anchored at his usual spot at third, where his thunderous bat did much of the talking. Riley batted .299/.377/.681 with 25 extra-base hits, 39 RBIs and 15 home runs in 37 games, including 13 dingers in his final 18 International League contests to prompt his promotion to the bigs. Although NL pitchers adjusted to Riley as the summer wore on, he still managed 18 roundtrippers and 49 RBIs in 80 games as a big leaguer.

Shortstop -- Riley Unroe, Mississippi (77 games), Florida (38 games), Gwinnett (13 games): Unroe, who turned 24 in August, made a positive impact with his new organization in 2019. The shortstop spent the first six seasons of his career with the Rays after he was selected in the second round of the 2013 Draft. The son of former Major Leaguer Tim Unroe began the year in the Class A Advanced Florida State League, but worked his way back to Triple-A on the strength of a breakout season. The Mesa, Arizona, native set numerous career highs while batting .281/.361/.403 with 34 extra-base hits, 60 RBIs and 14 stolen bases in 128 games.

Trey Harris, Rome (56 games), Florida (34 games), Mississippi (41 games): Whatever expectations existed for the 952nd player selected in the 2018 Draft, they've been recalculated. Harris, who packs a lot of punch into his 5-foot-8, 215-pound frame, began the year in the South Atlantic League and ended with Double-A Mississippi after a pit stop in Florida. The 24-year-old showed no signs of wearing down in his first full-season campaign either. Harris finished with a .323/.389/.498 slash line, 47 extra-base hits, 73 RBIs and 73 runs in 131 games.

"Trey probably had about as good a year as a player could have ... on both sides of the ball," Chiti said. "His physical talents are undeniable, but his makeup really shined through. He took on a bigger leadership role, which was great to see, and he made some big adjustments as the season went along. We sent him out to the [Arizona Fall League] to get him some more work and he's continued to impress."

Cristian Pache, Mississippi (104 games), Gwinnett (26 games): Signed as an international free agent in 2015, Pache has moved quickly since beginning his career the following year. One of the youngest players at each level he's played, Atlanta's top prospect finds himself on the cusp of the Majors at 20 years old. Pache blends a mixture of power, speed and athleticism into his 6-foot-2, 185-pound frame. The native of the Dominican Republic went deep a career-high 12 times in 2019 as part of a .277/.340/.462 campaign. On the surface, his numbers were almost identical to 2018, but a deeper look shows how far he came. Pache increased his OPS from .717 to .802 thanks in large part to a personal-best 57 extra-base hits and 43 walks.

"Even at such a young age and being one of our more visible prospects, Cristian continued to shine," Chiti said. "He made great strides and continued to adjust his swing and overall game as he progressed throughout the year. His defense has always been there, but his bat took a giant step forward in 2019. We're really excited to see what comes next."

Drew Waters, Mississippi (108 games), Gwinnett (26 games): It's only appropriate the top two prospects in the system found themselves in lockstep in 2019. Like Pache, second-ranked Waters enjoyed an All-Star season with Mississippi. His .319 average held up as the top mark in the Southern League and ultimately led to MVP honors. The 20-year-old completed 2019 batting .309/.360/.459 with 40 doubles among his 56 extra-base hits.

"Drew is a guy, like Cristian, that pretty much everybody knows about," Chiti said. "He made terrific strides this season, and a lot of that comes with maturity and the ability to turn his tools into skills. Drew has a willingness to go outside of his comfort zone and has the ideal makeup and aptitude to make himself a better player."

Utility -- Adam Duvall, Gwinnett (101 games), Atlanta (41 games): After consecutive 30-homer seasons as a big leaguer with the Reds in 2016-17, Duvall spent a majority of 2019 in the International League terrorizing opposing pitchers. The 31-year-old topped the loop in long balls for most of the year and finished with 32 despite playing in just 101 games. That was one shy of the league lead, behind Columbus' Bobby Bradley, Cleveland's No. 7 prospect. Duvall tacked on 10 more homers in the Majors.

Right-handed starting pitcher -- Ian Anderson, Mississippi (21 starts), Gwinnett (five starts): A hiccup after his promotion to Triple-A notwithstanding, Anderson showed why he's Atlanta's top-ranked pitching prospect. The 21-year-old won seven games and posted a 2.68 ERA with 147 strikeouts in 110 innings while limiting opposing batters to a .202 average for the M-Braves. Using a fastball that can reach the mid-90s plus a strong curveball and changeup, the 6-foot-3 righty ended the year tied for fourth among Minor Leaguers with 172 strikeouts.

"Ian is another guy with a plus makeup and aptitude," Chiti said. "He's got the tools to succeed and is a real student of the game, which sets him apart from a lot of his peers. He learns quick and we continue to expect big things from him moving forward."

Left-handed starting pitcher -- Tucker Davidson, Mississippi (21 starts), Gwinnett (four starts): Like Pache and Waters, Anderson and Davidson followed similar paths in 2019 from Double-A to Triple-A. However, unlike his right-handed counterpart, the No. 13 Braves prospect continued to thrive after his promotion to Gwinnett. Davidson posted a 2.25 ERA and averaged more than a strikeout per inning with 134 in 129 2/3 frames spanning 25 starts. The 23-year-old was rewarded for his exploits with both midseason and end-of-season Southern League All-Star nominations.

"Tucker took the important step this year of going from thrower to pitcher," Chiti said. "He's always had the tools and is a gifted athlete, but the steps he took on the mental side was what set his season apart from others. He's got a bright future and he'll look good atop the rotation in Gwinnett with Ian next season."

Relief pitcher -- Daysbel Hernandez, Florida (35 games): Atlanta got several season-long outstanding efforts from Minor League relievers in 2019, but Hernandez had arguably the best of the bunch. The 23-year-old held opponents to a .184 average and posted a 1.71 ERA while averaging 11.96 strikeouts per nine innings across 52 2/3 frames. Hernandez nailed down seven saves in 10 opportunities and surrendered more than one run on a total of three occasions all year.