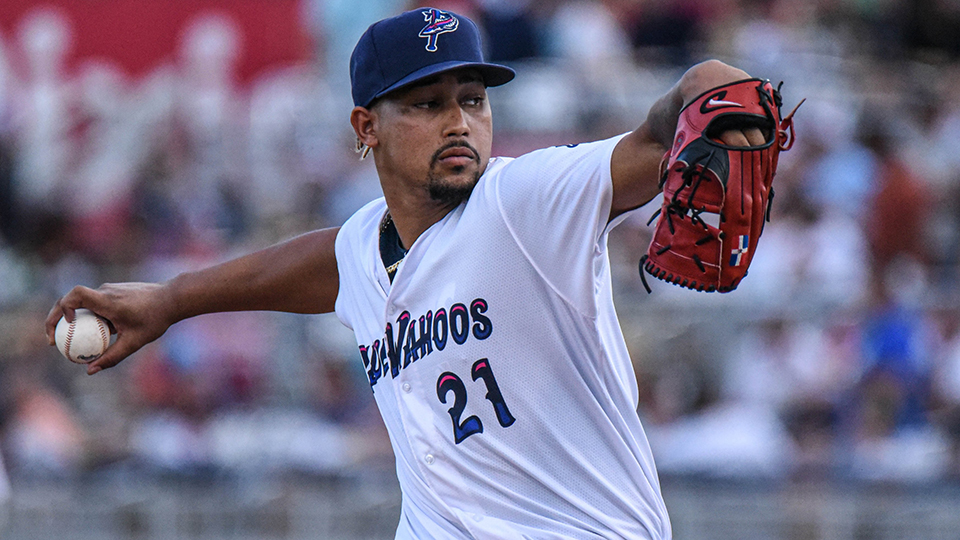 Jhoan Duran has 34 strikeouts over 32 innings since being promoted from the Florida State League on July 25. (Pensacola Blue Wahoos)

With a potential playoff berth at stake, Jhoan Duran did his part to tighten the Southern League South Division race.

The ninth-ranked Twins prospect allowed two hits and a walk and hit a batter while striking out 10 over a career-high eight scoreless innings as Double-A Pensacola held off Jackson, 3-2, on Friday night at Blue Wahoos Stadium.

The right-hander worked around an error by first baseman and Twins No. 2 prospect Alex Kirilloff in the first inning, plunked Renae Martinez with one out in the fourth and walked fifth-ranked D-backs prospect Daulton Varsho in the sixth. But he held the Generals hitless through six innings.

"I knew [Duran] hadn't allowed a hit, but for me calling the game, it doesn't change anything," Blue Wahoos catcher Ryan Jeffers said. "His fastball, slider and curveball -- when he's executing pitches, good luck to the other team.

"His four-seam command was the best I've ever seen. His curveball was lights-out, which leads to a lot of ground-ball outs. Everything was working tonight."

Duran (3-3) struck out Seth Beer -- MLB.com's No. 98 overall prospect -- and Ramon Hernandez to start the seventh. After a first-pitch ball to L.T. Tolbert, the second baseman slapped a line drive into right field for the visitors' first hit.

The 21-year-old struck out three in the sixth and seventh innings to reach double digits for the third time this season, including a career-high 14 for Class A Advanced Fort Myers on May 26. The common denominator in each of those three games: Jeffers was behind the plate.

"After he was traded to us last year, I caught his first outing," the backstop recalled. "He threw a no-hitter and came out because of the pitch count."

On July 27, 2018, the Twins sent shortstop Eduardo Escobar to Arizona for Duran and outfielders Ernie De La Trinidad and Gabriel Maciel. His first start for Class A Cedar Rapids came three days later as the righty walked one and struck out eight across seven innings.

Friday was Duran's sixth Double-A start. In his Blue Wahoos debut on July 28, he tossed five scoreless frames at Jacksonville. He was roughed up in his last four outings, however, yielding 19 earned runs and 26 hits across 19 innings.

Jonathan Cheshire, the third Blue Wahoos pitcher in the ninth inning, extinguished the Generals' two-out rally to pick up his fifth save. The 24-year-old right-hander has pitched for five teams across three levels, including one in an independent league, this year.

"I felt good with 'Ches' out there," Jeffers said. "He's had kind of a funky route this year, but he's throwing really well. He has three pitches, which is different for a guy who throws kind of sidearm, and his ball moves."

Jeffers noted while the playoff picture is coming into focus, the pitching staff's approach will not change down the stretch.

"We have a good system in place," he said. "We'll use the scouting reports, video and then evolve as the series goes along, but we'll keep the same process.

"We've got a really good team and we'll just keep rolling. The last two series, Jackson and Montgomery, are going to be tough. We have to approach it like it's going to be tough to beat us."

Pensacola is tied with Jacksonville, two games behind first-place Biloxi in the South Division with nine to play.

"We know where we stand," said Jeffers, who's batting .283/.358/.550 since being promoted from Class A Advanced Fort Myers on July 25, the same day Duran was bumped up. "It's the same game: come prepared and get the barrel on the ball. It's another level, another challenge.

"No one is taking this [final] push for granted. We will keep an eye on Biloxi and Jacksonville and we'll play like we have for the last 131 games -- play loose and have fun."