Las Vegas Ballpark concessions strive to be best of the best 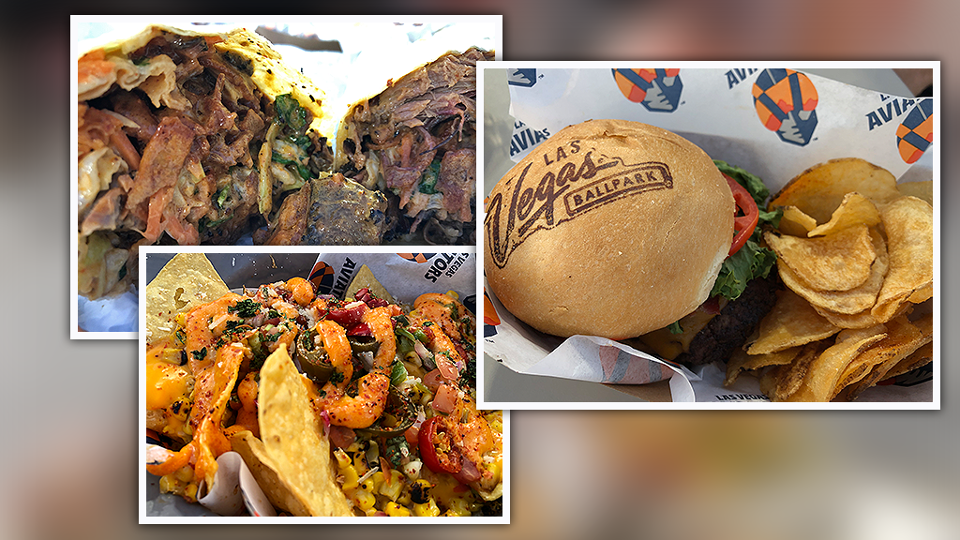 When Cody Malone was hired to oversee the food and beverage operation at Las Vegas Ballpark, he had one goal in mind.

Malone, an employee of Professional Sports Catering (PSC), spent the previous six seasons as director of food and beverage for the Tulsa Drillers. He relocated to Las Vegas last October; Las Vegas Ballpark, home of the Aviators, opened in April. Before that, the city's Pacific Coast League franchise played at Cashman Field and was known as the 51s.

"The next step for me was a bigger, better challenge and this has been a big challenge," said Malone, whose official title with the Aviators is "vice president of hospitality." "We moved here last October and we started the programming of the food. ... We had tasting committees, we tried out tons of food. We probably sampled hundreds of hot dogs, did hot dog tastings at different places. We tried pizza 25 times.

"Everything was pretty much local -- our goal was to bring a lot of Las Vegas to the ballpark and a lot of ballpark stuff to Las Vegas. So that was the thing. Even our main concession stand standards had to be the best. So that was why we sampled so many hot dogs, sampled so many buns. We did nacho chips, sampled probably 20 kinds of chips. We didn't leave any stone unturned to get to where we are today."

"Where we are today" is a unique place in the world of Minor League concessions, as the Aviators have partnered with a variety of notable Las Vegas chefs and restaurateurs in addition to offering their own in-house creations. (Malone said that his executive chef, Gary DeLucia, is "the best in all of Minor League Baseball, hands down.")

"You move here and start talking to people, you start talking to chefs in town," Malone said. "You meet a chef, 'Hey, what are your favorite places to go?' So we think outside the box. We take a classically trained chef [Brian Howard] who's doing Asian fusion to do hot dogs for us. Mimmo Ferraro of Pizza Forte, he's a classically trained Italian chef who's done stints in Italy. He's doing our pizza."

Other Las Vegas Ballpark concession partners include Capriotti's (sandwiches), Goodwich (macaroni and cheese) BBQ Mexicana and Tacos Me Gusta. The result is what just might be the must eclectic and high-end concessions lineup in all of Minor League baseball.

"It did take a lot of work and it's a labor of love. After 25 years in this business, I consider myself a food and beverage professional," Malone said. "I will try anything twice. I will go to the ends of the Earth to try something new or try something that's the best. If somebody tells me 'Go to the mountaintop because this is the best fish sandwich you are ever going to have,' I will go to the mountaintop to get that fish sandwich."

It's one thing to hear about ballpark food, but quite another to see and, most importantly, taste it. For this crucial latter endeavor I enlisted Ben Saxe as my Designated Eater. In this capacity, Saxe was tasked with eating the Las Vegas Ballpark cuisine that my gluten-free diet prohibits.

Saxe, a California native and UNLV graduate, works as a Clark County public defender. He and his wife, Rebecca, are expecting their first child in October. Over the course of two games, this intrepid local barrister sampled a sizable portion of the Aviators' concession offerings.

Saxe's culinary adventure began on July 24 during that evening's game between the Aviators and El Paso Chihuahuas. Howard, owner of Las Vegas's celebrated Sparrow+Wolf, also was on hand to show off his FlyDog line of frankfurter creations (for much more on this hot dog quartet, please read this MiLB.com story).

"Initially, this is exotic," said Saxe. "The cilantro takes you one way, the hot dog pulls you back in."

Howard then presented Saxe with Hercules, a deep-fried foot-long that celebrates the chili dogs of Detroit.

Saxe said the Hercules was unique in that "mustard introduces the taste of the chili." He then praised the Chicago Smokehouse as "really juicy and pleasant." But he had the most to say about the Heater, a spicy hot link sausage topped with Calabrian chili relish and shaved Grana Padano.

"This is a stays-with-you spicy," said Saxe, of the Heater. "But not cheap spicy. Classy spicy. I'm not struggling, just adapting to my new life. I feel closer to the equator."

The next night -- July 25, for those keeping score -- Saxe returned for another round of Las Vegas Ballpark's culinary highlights. He had his work cut out for him.

Saxe began Night II with the Aviators' All-American Burger, which features a bun branded with the Las Vegas Ballpark logo via what Malone described as a "top-secret caramelization process." These buns are courtesy of local Granello Bakery, a woman-owned establishment that also provides the Aviators with pretzels baked in the shape of an "A."

Designated Eater @saxeben is back for another round with @AviatorsLV⁩. He's got his work cut out for him! #brandedbuns pic.twitter.com/t9WZK1MAIj

The All-American Burger is comprised of a grind that is 80 percent chuck and 20 percent brisket; Saxe nonetheless praised the "produce" atop the burger, saying he was wowed by "how fresh it tasted."

Next up was one of the Aviators' most celebrated offerings, the Burnt End Burrito. This item is available at BBQ Mexicana's left field Home Run BBQ stand (BBQ Mexicana is a "fast casual" eatery run created by Las Vegas celebrity chefs Susan Feniger and Mary Sue Milliken, and currently overseen by executive chef Mike Minor.)

During the course of this writer's three-night stay with the Aviators, he was privy to many unsolicited positive assessments of the Burnt End Burrito. Would Saxe agree?

The Burnt End Burrito, available at the Home Run BBQ outfield stand, is one of @AviatorsLV most popular concession items. pic.twitter.com/ZB1BrWE8M1

"I've never had a burrito like this before. It's spicy, a lot of vegetables, and really good meat," said Saxe. "Typically the rule in Mexican joints is to get the carne asada. That's a pretty reliable rule, but I'd take this over the carne asada."

Saxe had a lot of food left to eat, but time was short and the remainder of his gastronomic adventure went by in a blur. Highlights included the following:

Me Gusta Tacos, focused on "serving modern Mexican food," has locations in Las Vegas and nearby Henderson, Nevada.

Goodwich - Build Your Own Mac and Cheese

It may be heard to tell, but there is indeed macaroni and cheese in the above photo. It's just topped -- and therefore obscured -- by a wide array of items from the Goodwich build-your-own mac counter, including jalapeños, cherry tomatoes, green onions and the coup de grâce, Flamin' Hot Cheetos. Goodwich generally specializes in sandwiches (hence the name) and has two Las Vegas locations.

"This seems like something you'd do in college at three in the morning," said Saxe. "It's a great idea, having a bunch of toppings for the mac and cheese."

Would nachos in another holding mechanism taste so sweet? This particular iteration was the Elote Nachos, topped with corn, crema, jalapeños, cheese, pico de gallo, chipotle mayo and Taijin seasoning.

Saxe, lamenting that his metabolism isn't as good as it once was, had had enough.

But Saxe is just one man, and Malone and his staff are tasked with feeding thousands on a nightly basis. He has no plans to do anything but expand his "Minor Leagues done Major" ballpark operation.

"That's the reason they gave us an offseason. We get to sit back and see what did well and what didn't do well," said Malone. "And as of right now, most everything is doing well. So we have the fall and early winter to sit back and reprogram our menus and see what we want to do next year. Get in the kitchen and hit the test kitchen with ideas. Shop around new ideas and then beginning of April next year, roll out all new ones.

"That's the way we do it every year, and that's the exciting part of baseball. Opening Day every year, everybody's a contender."