On the Road: In Reading, Edge finds his center 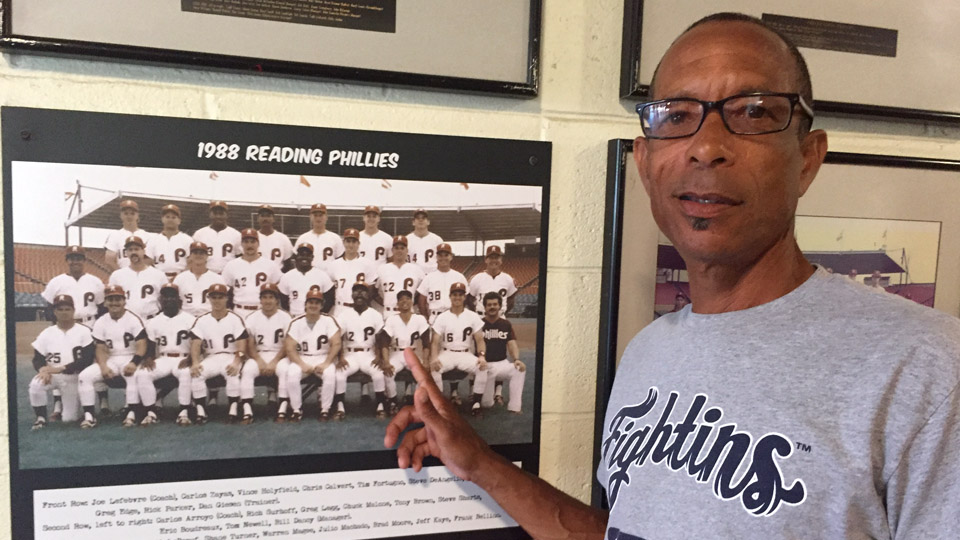 Greg Edge, longtime member of the Reading Fightin Phils' Clean Team, points himself out in a 1988 Reading team photo.

Three decades ago, Greg Edge wanted nothing more than to play his way out of Reading, Pennsylvania. Now, Reading is where he is and where he wants to remain.

"He cleans the stadium every day, works the games, pulls the trash bags," said Scott Hunsicker, Reading Fightin Phils general manager. "He kills it here every day. The players love him, the managers love him, the front office loves him. And in addition to working here, he's a phenomenal youth baseball coach."

Hunsicker also praised Edge as an "amazingly humble guy" for his willingness to do custodial work at a ballpark where he once excelled as a player. (As a member of the 1988 Reading Phillies, Edge was named to the Eastern League All-Star team.)

"It ain't the most glamorous job. It ain't the most well-paying job. But it's something I can count on every year," said Edge, speaking prior to a game last month. "And it keeps me around the ballpark, keeps me seeing the kids still coming up."

Edge, a native of Sacramento, was raised on the San Francisco Giants and Oakland A's teams of the 1970s. He cites Willie Mays, Bobby Bonds, Juan Marichal, Joe Rudi and Reggie Jackson among his early baseball heroes, but he always preferred playing baseball to watching it.

"I was blessed. I had some skills early. Always played with the older kids, they wanted me to be on their team. I could kind of get a feel that I had a little ability early on in life."

Edge described himself as a "defensive wizard" in the mold of Ozzie Smith. As a hitter, he prided himself on being able to do the little things: moving the runners, stealing bases and avoiding the strikeout. His standout skills brought him to the University of Oklahoma, and it was there where his career nearly ended.

In 1985, after a game against Oklahoma State, he was arrested at the ballpark for cocaine distribution. Edge had sold the drug to undercover officers on two occasions; he was indicted on seven counts and sentenced to 30 months in prison. He ended up serving only five months. As Edge puts it, "The Phillies signed me out of the penitentiary."

He made his professional debut in 1986, ending the season with Double-A Reading. He spent part of 1987 with the team as well as the entirety of 1988; one of his teammates during this time was current Fightin Phils manager Greg Legg. Edge also met Hunsicker during his first go-round in Reading; Edge would hit and work out in the offseason at nearby Albright University, and Hunsicker was then a member of the school's baseball team.

When Edge was once again assigned to Reading to begin the 1989 season, he asked to be traded. What once had represented an opportunity became a purgatory.

"I was just trying to get another shot somewhere else," he said. "And it just didn't happen."

It wasn't for lack of trying. Edge went on to play in the Milwaukee Brewers and Pittsburgh Pirates organizations, and in 1991 improbably landed on the cover of National Geographic as part of David Lamb's story about taking a season-long Minor League road trip. (The photo shows Edge, as a member of the Double-A El Paso Diablos, facing the flag during the national anthem.)

Edge retired after the 1992 season, at the age of 27, having logged 555 games in Double-A against just 50 in Triple-A. He said that by the time he retired, his native California no longer felt like home.

"I wanted to venture out and do my own thing," he said of not returning to the Sacramento area. "[Reading] is my home. I had gotten used to it."

Edge has a son and a daughter from a marriage that ended in divorce, and has since been blessed with five grandchildren and one great-grandchild. And, in another example of the interconnectedness of Reading, he's now in a long-term relationship with a woman whose son once served as a R-Phils batboy. After all these years, he's as much a part of the team as ever.

"All of it's been family, from [former president and general manager] Chuck [Domino] to Scott and on down. And that's how I got started, you know? That's what it is, a little family."

While Edge said that the cleaning work can be "monotonous," it beats most of the other jobs he's held where "they're trying to run you into the ground." And, perhaps best of all, it allows him to be around the game and those who play it. He says that whenever current players want to talk to him, "they can ask anything." He's also devoting as much time as he can to youth coaching, working with all-time Reading hits and games-played leader Michael Spidale.

"That's been a fulfilling thing, that I can give back in some way coaching-wise," he said. "[Spidale] played in the Minors for 12 years, I played for seven, so we know what we're talking about. ... He's a younger guy, so he has his ideas. I'm an older guy with old-school ideas, so it meshes really well and has been really fun."

And it all centers around Reading, Pennsylvania. It's funny how life works out.