And the Golden Bobblehead goes to... 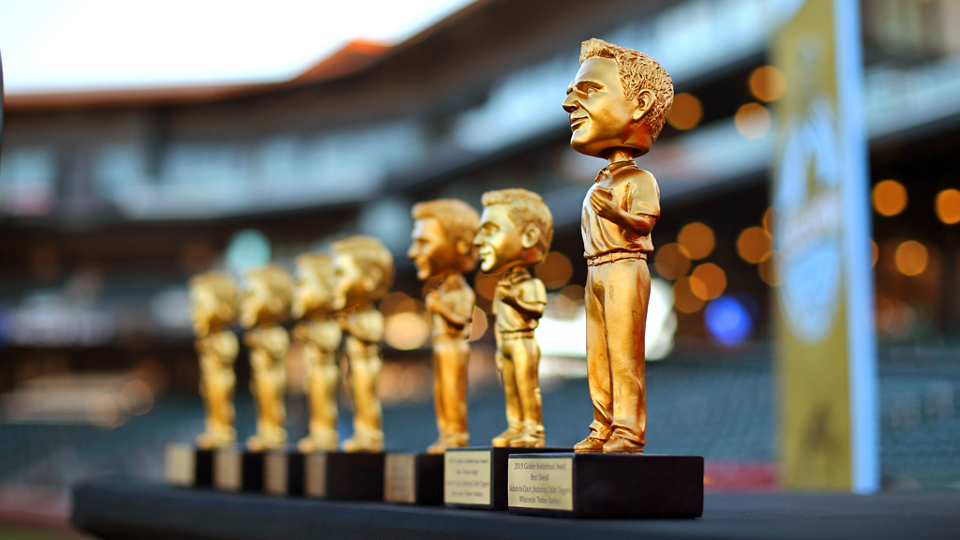 The Golden Bobbleheads have been bestowed. While the Best Specialty Jersey winner was selected via an online fan vote, the remaining five Golden Bobblehead winners were chosen via a vote of Innovators Summit attendees that took place on Thursday morning. For more info on the Golden Bobblehead Awards, as well as a thorough rundown of the Theme Night category, click here. Otherwise, keep reading to find out which teams went home with the gold.

2019 was the year of the cow. The Timber Rattlers, who have long staged their Salute to Cows promotion honoring the local dairy industry, upped the ante this time around by changing their name to the Udder Tuggers. It all went down on June 20 as part of a night at the ballpark that also included milk-chugging contests, chocolate milk samples and a celebrity appearance from an actual cow. The Udder Tuggers name and logo had an undeniable appeal; not only did this promotion win its "Best Theme Night" category, it was also voted "Best Overall." Udder dominance.
Acceptance Speech: "Winning two Golden Bobbleheads has milked us dry of cow puns and we are very appreciative of the recognition. I want to thank our staff and Brandiose for the concept and execution of this promotion and our fans for their reaction. The Udder Tuggers will be back to lead the herd in 2020." - Rob Zerjav, Timber Rattlers president

You won't find a more brooding boozy Tacoma breakfast than @DirtyOscars. Check out our feature on them and more in our new episode of This Is R City. https://t.co/vwbSMlDTF0 pic.twitter.com/gcUmLe7Z9x

Tacoma's "This is R City" is a video series that, as the team puts it, "showcases the places and personalities that make Tacoma a great place to live. ... It's our love letter to the place we call home." Each episode, which is screened at Cheney Stadium as well as across social media platforms, celebrates the small businesses, cultural institutions and lovable characters that make Tacoma unique.
Acceptance Speech: "Our teams are a reflection of our cities, and [creative director] Casey [Catherwood] and [director of media relations and content development] AJ Garcia generated real content that speaks to our story. We have a unique platform, and their work reflects that. And reflects the soul of Tacoma." - Aaron Artman, Rainers president

In advance of May 19's Teacher Appreciation Night, the Flying Tigers announced that they would award one area educator a Master's degree from Southeastern University. Five finalists were invited to the ballpark for the game, with Susan Carlton announced as the winner. Carlton, a first-year teacher and single mother who had been homeless for several months upon moving to Florida from Appalachia, received a much-needed opportunity to further her already impressive professional journey.
Acceptance Speech: "A special thank you to Southeastern University and the Polk County School Board for their partnerships in making this happen. To change someone's life by providing them an amazing opportunity through the game of baseball at our ballpark is rewarding and a great credit to our Flying Tigers staff." - Zach Burek, Flying Tigers general manager

On June 14, participants in Play Like a Girl's STEM Camp visited the Sounds for a multi-faceted, hands-on learning experience. Campers spent the morning with female members of the front office, learning about all aspects of the team's business operations. In the afternoon, three Sounds players conducted a baseball clinic with the campers. Armed with new skills and knowledge, the campers were invited back to the ballpark for that evening's game.
Acceptance Speech: "The Play Like a Girl Camp Day at First Tennessee Park allowed the women on our staff to engage with young girls through STEM and sport. The 'behind the scenes' look at various departments (sales, community relations, video production, social media, promotions) represented by the women on our staff gave the girls an understanding of the opportunities in the sports industry. The votes Play Like a Girl received in El Paso were votes for women everywhere." - Sounds general manager Adam Nuse

Not even a knee sprain can stop the Fridge! 🥶 pic.twitter.com/ztNBjZaN8V

In 2018, the Atlanta Braves gained renown for their between-innings Beat the Freeze race. This season, the Gwinnett Stripers (Atlanta's Triple-A affiliate) flipped the concept on its head with their Beat the Fridge race. The Fridge, a 300-pound man wearing a body suit, received a head start over his opponents. But looks can be deceiving; more often than not, The Fridge would turn on the jets at the last moment and cross the finish line just ahead of his complacent adversary. The end result was a viral sensation, with videos of the Fridge's unlikely triumphs spreading like wildfire across the internet.
Acceptance Speech: "With so many creative ideas circulating at the Innovators Summit, a winning promotion is never a sure thing. But hearing from teams with their cute 1-2 million impressions, we felt like Beat the Fridge had it in the bag with over 83 million views." - Erin O'Donnell, Stripers assistant general manager

On July 20, 1969, Neil Armstrong and Buzz Aldrin became the first humans on the moon. This season, the Bowie Baysox were one of many Minor League teams to celebrate the 50th anniversary of this momentous occasion. The Baysox took the field in jerseys depicting Aldrin saluting the American flag on the front and a full moon on the back. This gravity-defying get-up won MiLB.com's Specialty Jersey Fan Vote, conducted in advance of the Innovators Summit.
Acceptance Speech: "The Baysox are extremely excited to bring home the first-ever 'Best Specialty Jersey' Golden Bobblehead, and thank all of our fans and fans across the country for voting for our Moon Landing Anniversary Jersey. We'd also like to thank OT Sports for their help in designing it and bringing it to us. We look forward to sharing the over $15,000 we raised in the jersey auction with STEM Education programs in our area school systems." - Phil Wrye, Baysox assistant general manager