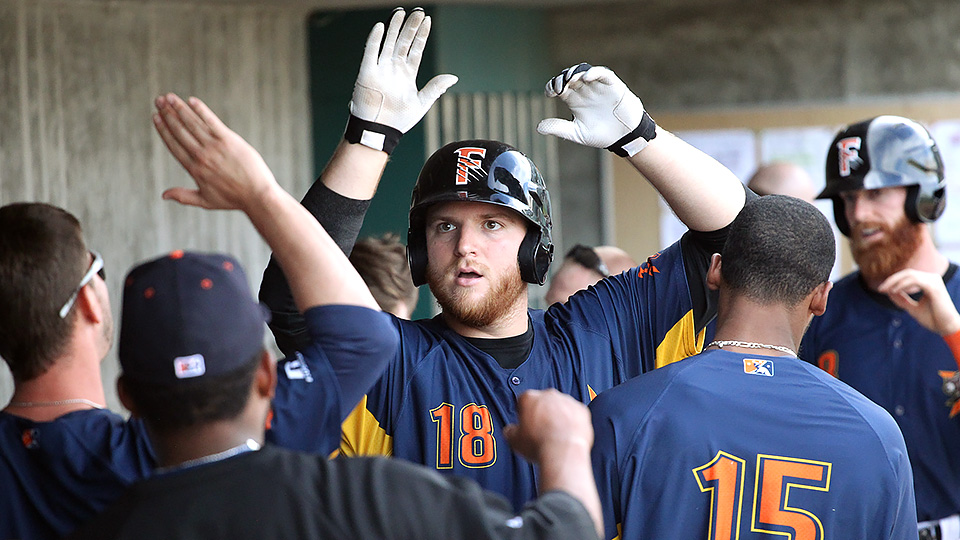 ST. PETERSBURG, Fla. -- Minor League Baseball today named Fresno Grizzlies first baseman A.J. Reed the winner of the 2017 Joe Bauman Award, presented by Musco Sports Lighting. Reed will be honored at the Baseball Winter Meetings. in Orlando, Florida, this December with a trophy and a check for $6,800, representing $200 for each of his 34 home runs.

First presented in 2002, the award is named for Joe Bauman, who set a then-professional record with 72 home runs in 1954 while playing for the Roswell Rockets of the Class-C Longhorn League.

"I want to thank Musco Sports Lighting for this honor and for providing the great lights in so many of the ballparks in which we play," said Reed, who has hit 85 of his 95 career home runs in night games. "The 2017 season was a lot of fun and I appreciate all of the support from my teammates, coaches and the fans."

Reed, 24, is the first two-time Bauman Award recipient, having also claimed the award in 2015 with 34 round-trippers between Class A Lancaster and Double-A Corpus Christi. In 400 career Minor League Baseball games, Reed has clubbed 95 home runs and driven in 335 runs. He also has three homers in 47 Major League Baseball games with Houston.

The left-handed hitting first baseman was the Astros' second-round pick in the 2014 First-Year Player Draft out of the University of Kentucky, where he won the 2014 Golden Spikes Award as the top amateur player in the nation.

After homering 12 times over the first three months of the season, Reed belted 10 homers in July and 11 more in the month of August before his two-run shot in the fifth inning of the Grizzlies' season finale put him at 34, breaking Fresno's single-season home run record. With four long balls in his final 10 games, Reed edged out Bowie's Austin Hays, Nashville's Renato Nunez, and Reno's Christian Walker, each of whom finished with 32 homers.

In addition to the Joe Bauman Award, Musco Sports Lighting also presents the home run leader from each classification level with a check for $500.

Erie SeaWolves (Tigers) outfielder Christin Stewart led the Double-A level with 28 home runs in the Eastern League. Stewart, 23, was selected by Detroit in the first round of the 2015 First-Year Player Draft out of the University of Tennessee.

Stockton Ports (Athletics) outfielder Seth Brown led the Class A level with 30 home runs in the California League. Brown blasted 12 of those homers in the month of August, and added three more across four games in September. The 25-year-old was drafted in the 19th round of the 2015 First-Year Player Draft out of Lewis-Clark State.

Grand Junction Rockies outfielder Casey Golden led the Short Season A and Rookie-level leagues with 20 home runs in 54 games. Golden homered in three straight contests from Sept. 3-5, and launched five total over his final 10 games. The 23-year-old was drafted by Colorado in the 20th round of the 2017 First-Year Player Draft out of the University of North Carolina-Wilmington.