No. 16 overall prospect racking up K's once again in Arizona 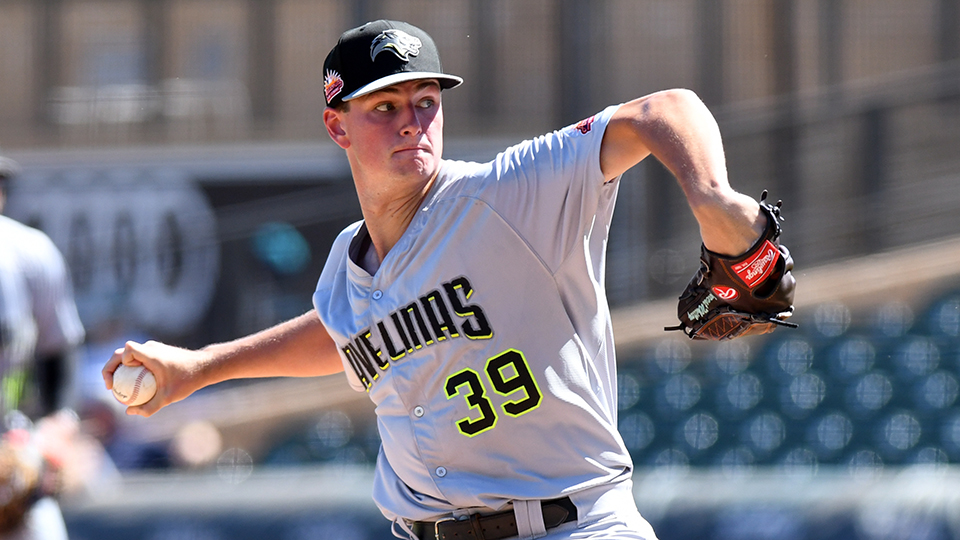 Forrest Whitley didn't walk a batter in either of his two most recent starts for Peoria. (Buck Davidson/Getty Images)

Heading into Wednesday, no one in the Arizona Fall League had more strikeouts than Forrest Whitley.

Sound familiar? It should. Whitley left the 2018 edition of developmental circuit with an unmatched 36 K's and an expectation that he -- then the top pitching prospect in baseball -- soon would be fanning batters in the bigs. Maybe, he thought, the Astros' 2019 Opening Day roster would include a spot for him. It didn't. Perhaps a hot Spring Training could transition into a strong start at Triple-A Round Rock and an early callup. Wrong again.

Whitley's ERA inflated to 12.21 after eight appearances with the Express. Shoulder fatigue forced the right-hander to miss seven weeks. When he returned, Whitley couldn't salvage a summer that unraveled into the toughest stretch he's faced as a professional. He finished with 86 strikeouts in 59 2/3 innings across four levels, but he also walked 44 and his 7.99 ERA was three runs more than the next highest figure posted by any of the 32 pitchers on MLB.com's Top 100 Prospects list.

"The season never really turned around," the 22-year-old said last week, "so I didn't deal with it appropriately."

So the AFL in 2019 marked the onset of Whitley's do-over. He is healthy. He is confident. Still ranked 16th overall and No. 1 for the Astros, he has accepted the realities of what his season became and he intends to run it back -- this time with sharper mechanics and a more acute mind.

The early results -- a 0.63 ERA, eight hits, two walks and 20 strikeouts in 14 1/3 innings over three starts for the Peoria Javelinas -- suggest a return to form. Last weekend, one of Whitley's pitches hit 98.2 mph on the radar gun. His two scoreless outings matched his total from the entire season.

"I would say that after these last few outings, the swagger is definitely a little bit back," he said.

The familiarity of pitching in Arizona has proved comforting to Whitley. Triple-A, though, was new. His command vanished in the Pacific Coast League. One bad outing snowballed into a string of them. He gave up nine home runs in eight games. He made it through the fourth inning once. The opposition hit .343 off him, and he felt "lost" on the mound.

Some combination of mechanics and health played a role. While the top of Whitley's frame moved along an upward plane toward the front of the mound during his delivery, he had a tendency to dip his right shoulder. It put extra stress on his body during a motion that is already unnaturally stressful.

"To be honest with you, things got a little sloppy," Whitley said, "and I got hurt because of it."

But maybe the injury contributed to the sloppiness. Either way, he spent all of June on the injured list. The struggles continued in walk-filled rehab stints in the Rookie-level Gulf Coast and Class A Advanced Carolina Leagues. None of this was easy for the 2016 first-round pick.

"I still think I'm a very talented pitcher and I can pitch with the best of them," Whitley said. "But, you know, obviously, your confidence is a little sidelined when something like that happens and you get hurt. You're watching all your buddies kind of pass you and getting up to the big leagues. It's tough to see, especially when you think about how you could have been in that position a couple years ago, last year, this year, and you feel like you're really late to the party. But, you know, everybody's road to the big leagues is a little bit different."

The detour, Whitley believes, made him better. He learned what it's like to fail, and that will help when it inevitably happens at the highest level. He took solace in the fact that while 2019 unfolded into doom after what he remembers as six bad outings, he's had far more than six good outings. The decline, he said, was just "amplified" because of his status as an elite prospect on the fringe of The Show.

The mechanical flaw evident during Whitley's struggles is supposedly fixed. He spent the second half of the regular season focused on keeping his shoulders on a flat plane during his delivery. The ball comes out of his hand easier. His deceleration process has improved. His shoulder doesn't dip, but the stress he puts on it has.

Graham Johnson, pitching coach at Double-A Corpus Christi, spent a month with Whitley working on these changes. He pushed the Texas native not to rely on the fastball. He marveled at Whitley's acceptance of new ideas.

"As many moments as there might have been where it's like, 'Man, what's going on?' or anything like that or [it] wasn't going his way," Johnson said, "there were just as many, if not more, moments of, 'This kid is still as good as he's ever been.'"

The next step, as Whitley is well aware, is creating the latter kind of moments consistently. But for now, he doesn't want to look too far ahead.

"I've experienced a lot of heartbreak out there on the mound, but I know when I'm feeling it and I'm pitching well, I'm going to try to experience that high -- but also stay pretty level because I know how it can get on the opposite side of the spectrum," he said. "I like the way things are going out here in Arizona. I've got the confidence. I fully expect to get through this Fall League without having a poor outing. If I can just take that similar momentum that I had last Spring Training into this next one, then I feel like I'm in a pretty good spot."