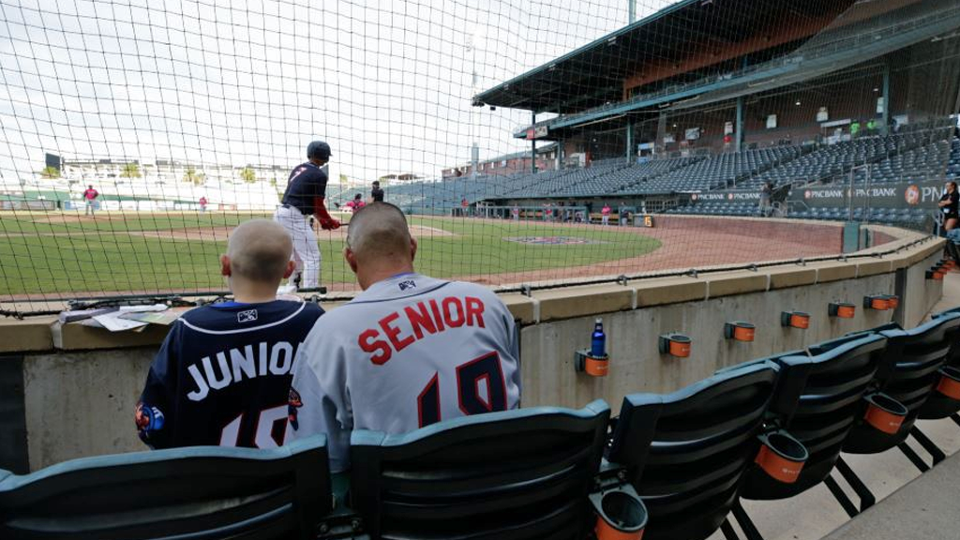 On Tuesday, the Jacksonville Jumbo Shrimp set a Southern League record for lowest attendance in a game. Mission accomplished.

The Jumbo Shrimp -- Double-A affiliate of the Miami Marlins -- offer a weekly  "Two For Tuesday" two-for-one ticket special. For its most recent iteration, they took it literally and only admitted two fans through the gates: 12-year-old Joshua "Junior" Ribeiro and his father, Joshua Ribeiro Sr. The goal, simple yet profound, was to provide Junior with the baseball experience of a lifetime.

Junior -- a fan of Marvel superheroes, Mexican restaurants and, of course, baseball -- is battling a rare form of cancer known as acute lymphoblastic leukemia (ALL). He came to the attention of the Jumbo Shrimp via Dreams Come True, a Jacksonville-based wish granting charity which provides joyful experiences to children with life-threatening illnesses. During Tuesday's tilt between the Jumbo Shrimp and the Pensacola Blue Wahoos, the Baseball Grounds of Jacksonville was transformed into Junior's personal playground.

"[Junior] found out a week or so ahead of [the game]," said Jumbo Shrimp director of promotions David Ratz. "When he got here, seeing the look on his face was incredible. He was in the clubhouse meeting our guys, threw out the first pitch, played all the between-inning games. He and his dad sat by our dugout in the front row, so he was talking to [the players] the whole time. At one point there was a foul ball down the right field line. With no one else there, he ran across the stadium to get it. Just absolutely loving it. To be 100 percent honest, when I saw him going for the foul ball, I broke down in tears. Cancer has definitely touched my family, so it was so great to see a kid that happy with everything else going on in his life."

That foul ball was one of six that Junior acquired, along with two broken bats, lineup cards, two team-signed balls and eight T-shirts.

"We did a T-shirt toss to the empty stands," Ratz said. "I emptied out my whole bag throwing right to him."

The Jumbo Shrimp advertised prior to the game that, "as fate would have it ... the first two fans through the gates will receive an authentic Jumbo Shrimp jersey." Thus, father and son were decked out in "Junior" and "Senior" jerseys during the ballgame. The visiting team got into the act as well, with Blue Wahoos manager Ramon Borrego walking into the stands to personally deliver a hat and other gifts.

"It was from the entire team, and they didn't have to do that," said Ratz. "The Blue Wahoos stepped up and embraced what we were doing. It was really touching when that happened."

Video: Two's a crowd in Jacksonville

Jacksonville's literal Two for Tuesday was partially inspired by the Charleston RiverDogs classic Nobody Night promotion, a 2002 endeavor in which the team didn't allow any fans in the ballpark until the game became official.

"It was kind of like, 'That's neat,'" Ratz said of Nobody Night. "'What can we do that's different? What will resonate with the people of Jacksonville?'"

Hence, the literal Two for Tuesday. Despite the self-imposed low turnout, the ballpark was fully staffed throughout the game. Concession stands were open, and vendors roamed the empty aisles. Save for Junior and his father, fans were not allowed inside the ballpark until the conclusion of the fifth inning. Prior to that, they congregated at a block party staged just outside of the left field Tiki Terrace. Broadcaster Scott Kornberg even called the action from this location, with his partner Roger Hoover remaining in the Jacksonville press box.

Props to our broadcast team of @Roger_Hoover and @ScottKornberg for pulling off an incredible tag team Play by Play as Scott calls the action from beyond the gates as part of our @DCTJAX literal Two-for-Tuesday! pic.twitter.com/9sAaGO0mDU

"We marked the game as 'sold out' when tickets went on sale," said Ratz. "We also worked with the city to have parking fees waived for the night. We felt it would be a jerk move if people paid for parking and then found out they couldn't go to the game. ... Another thing was that people working for both [parent organizations], scouts and video people, agreed to watch the game from the suites. They stayed hidden and out of sight. We realized they had a job to do, but everyone was very accommodating."

Once the fifth inning concluded, approximately 150 fans transitioned from the block party to the stands. The focus remained entirely on the guest of honor, however, for the remainder of the 1-0 loss to the Blue Wahoos.

As part of our @CommFirstCU literal Two-for-Tuesday setting an attendance record low of 2 ( a @DCTJAX dreamer & his dad) we welcomed in the fans once the game became official! pic.twitter.com/lOMbwXjdsc

"They stayed until the end cheering for Junior," said Ratz.

Ratz acknowledged that Tuesday's reported attendance of two "hurt the season average," but maintained that it was all worth it in the end.

"We accomplished what we set out to do," he said. "We'd definitely entertain the idea of doing it again should the opportunity, and the wish, present itself."