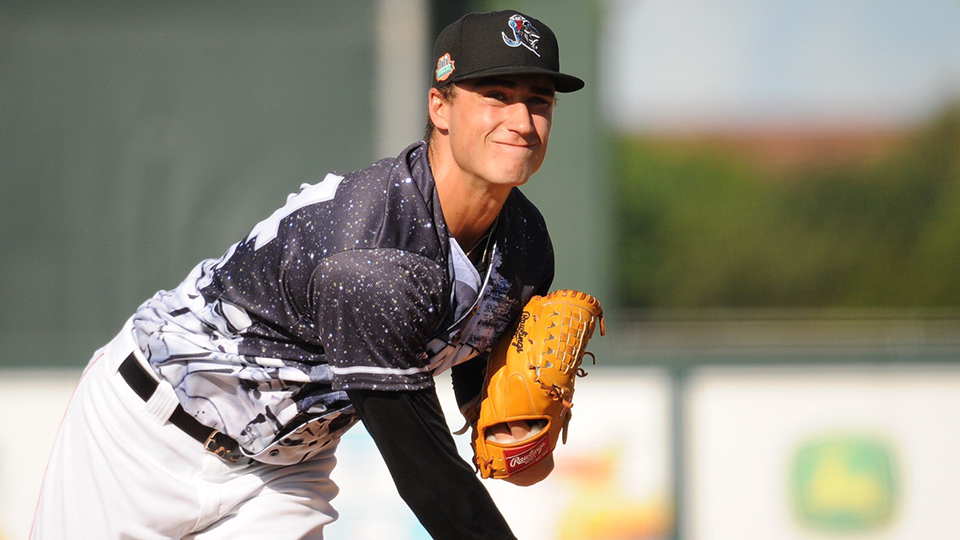 If Jordan Holloway appears excited on the mound, that's because he genuinely is. But when he learns to harness that energy, opposing hitters find themselves in trouble.

A night after Marlins No. 21 prospect Will Stewart carried a no-hitter into the eighth inning, Holloway fanned eight and gave up one hit over six scoreless frames. The right-hander issued one walk and faced one batter over the minimum as Class A Advanced Jupiter rolled to a 7-2 victory over Lakeland on Saturday at Roger Dean Chevrolet Stadium.

"Just being able to harness my adrenaline and understanding what I need to do out there to see positive results," Holloway said. "I worked really hard this week to get to the point where I can be comfortable and use my body in a positive way instead of just being a little too aggressive and pumped up and excited. I was able to harness it a little better tonight."

The reason behind that passion is that the past two seasons have essentially been lost ones for him. A triceps injury cost him about half of the 2016 campaign, and the 13th-ranked Marlins prospect underwent Tommy John surgery in 2017 after starting 11 games for Class A Short Season Batavia in the New York-Penn League. He returned to the mound last year, making seven appearances between the Rookie-Level Gulf Coast League and Batavia that left him with little runway heading into 2019.

In his first Florida State League start, Holloway let his emotions get the best him. He was wild and walked six batters over three innings while allowing two earned runs and one hit. Only 36 of his 74 pitches went for strikes. Holloway attributed it to jitters that stemmed from the possibility of seeing extensive game action for the first time in a while.

"I was putting myself into situations where I couldn't use any of my pitches. Tonight, obviously, was the opposite," he said. "It feels great to be back. Had a rough outing to start out the year, but I had that kind of first-game, jumpy, excited to be back out there stuff. I think I was able to settle down and really pitch to my full potential tonight."

Flying Tigers leadoff man Luke Burch worked a 3-2 count to begin Holloway's outing and lined a single to left field. That marked the lone hit against the right-hander, and Burch was quickly erased when Holloway got Brady Policelli to bounce into a double play on the next pitch.

"My defense played great behind me tonight," he said, "I had trust in them the whole entire time. So I was just going to go out there and trying to attack every single hitter."

The 22-year-old retired the side in the second and issued a two-out walk to Cole Peterson in the third inning. Peterson stole second, but Holloway kept a zero on the board by getting Burch to look at a third strike. Holloway retired the side in order in the fourth, fifth and sixth, setting down the final 10 batters he faced in his second Florida State League outing.

Holloway's preference is to establish the fastball, his best pitch -- it rates a 70 out of 80 on the scout's scale -- before working in the curveball and changeup. Pitching in favorable counts allowed him to be on the offensive with his off-speed offerings.

"I thought both of them worked really well. I was able to throw a lot more curveballs in the zone. ... That allowed me to put away guys with all three pitches," the Arvada, Colorado, native said. "I think my biggest takeaway from tonight is how well you can set yourself up when you are commanding your pitches. If you let them put the ball in play and you have the mind-set that you're going to attack somebody, you're going to start seeing positive results."

The first five months of his Tommy John rehab may feel like a while ago, but it proved to be the most difficult stretch Holloway had to endure, he said. The monotony of being unable to throw takes a toll; he lost weight and strength.

"You just have to mentally grind through it all," he said.

All along, however, the 2015 New York-Penn League midseason All-Star saw the surgery as a blessing in disguise. He eventually regained all of the lost pounds and even added 20.

"Getting those 14 months, you just learn everything mentally, physically, everything above, about yourself," Holloway said. "You become in tune with everything."

Eventually, Holloway participated in his first Grapefruit League games with the Marlins this spring. He came out of the bullpen twice and surrendered six earned runs over 2 2/3 frames. Still, pitching against Major Leaguers following an injury-riddled patch led to some excitement and hype -- his fastball consistently hit 98 mph on the radar gun.

"This whole day, I woke up and I was ready to go at 5 in the morning," Holloway told MLB.com after his first spring outing.

And following Stewart's strong outing was no surprise to Holloway. The staff had been talking this week about the necessity of walking fewer batters and giving the Hammerheads a better chance to win. So far, the message has been received by two important arms in the rotation.

Marlins No. 12 prospect Jose Devers tripled, doubled and scored twice. Second-ranked Victor Victor Mesa reached base twice, drove in a run with a sacrifice fly and scored once.