On the Road: Lynchburg Designated Eater 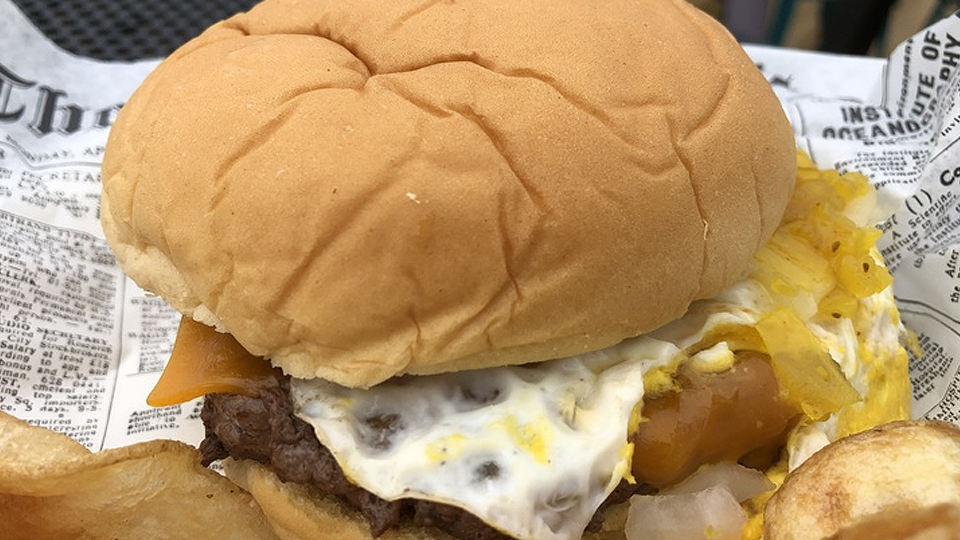 The Lynchburg Hillcats' revamped concession menu is headlined by the local specialty that is the Cheesy Western.

Have you ever had a Cheesy Western? Have you even heard of such a thing?

Prior to visiting the Lynchburg Hillcats last month, my answer to both questions was "no." However, the Hillcats are doing their part to raise the prominence of this regional specialty, which consists of a burger topped with onion, pickles, sweet relish, cheese and -- most importantly -- a fried egg. The Cheesy Western is sold at a venerable Lynchburg establishment called The Texas Inn, which has two locations in the city. It's also well-known in Roanoke, Virginia, where it is sold at the Texas Tavern. Both of these Virginia-based restaurants were founded by a man named Nick Bullington in the 1930s.

As of this season, the Cheesy Western is also sold at the Hillcats' home of Lynchburg City Stadium.

There's a new sheriff in town, logo courtesy of Brandiose.

Tweet from @Brandiose: The Texas Inn in Lynchburg, Virginia is no joke! 🍔 They serve up a mean Cheesy Western at the counter. A counter of only like 10 seats! We���re talking a cheeseburger topped with a fried egg, relish and pickles. 🤫 A little secret: you get onion if you ask for it "with"! pic.twitter.com/90x5eEtBUn

I cannot eat Cheesy Westerns, of course, due to the fact that I have celiac disease. That honor fell to my Designated Eater, Will Sloan, who was tasked with eating the ballpark cuisine that my gluten-free diet prohibits. My time with Will was unique, as the Sunday afternoon ballgame at which he was supposed to eat had been rained out. The weather quickly cleared up, however, and director of concessions Matt Ramstead was willing to fire up the grill. So Will drove over from the town of Bedford -- where he was born and raised -- to have a feast in an empty ballpark. This was an historic Designated Eating first.

Some of Will's earliest and best sports memories are of going to Minor League Baseball games with his father, who died of lung cancer this past January.

"Bedford's about halfway between Salem and Lynchburg. My earliest memories with Dad are going to Salem Buccaneers games at Salem Municipal Field and Hillcats games here," said Will, a community college career coach who now has two children of his own. "This is what we did. It's nice to come here [to Lynchburg City Stadium] to remember and reflect on the memories we had. It's very therapeutic, without getting too deep into the weeds on all that."

Despite rooting for the Hillcats, some of Will's most vivid Lynchburg baseball memories involved members of the opposing team: Richie Sexson hitting three homers in one game with the Kinston Indians; Zach Grienke pitching a complete game for the Wilmington Blue Rocks; Rafael Furcal and Marcus Giles suiting up for the Myrtle Beach Pelicans.

Now, Will was ready for some new, food-based memories. Before the inevitable Cheesy Western, he was presented with a Mac and Cheese Dog, a BBQ Parfait and some house-made chips.

Will began with the Mac and Cheese Dog, which is topped with bacon and barbecue sauce and available at the Hillcats' Hot Diggity Dog Weiner Emporium. Tweet from @bensbiz: .���@LynHillcats��� Designated Eater Will Sloan, eating in an empty stadium. pic.twitter.com/dJnUJM2wxL

"I love hot dogs, I love mac and cheese and I love barbecue," said Will, who had fasted the previous day in preparation for his Designated Eater stint. "Why not mix it all together?"

Next up for Will was the three-layer BBQ Parfait, available at the Pitchin' Kitchen. Barbecue sauce and baked beans are piled atop pulled pork, which is itself piled atop mashed potatoes. The pulled pork is procured from Lynchburg's Fifth and Federal restaurant. (Like defunct Philadelphia jewelry store Robbins 8th and Walnut, Fifth and Federal's name is its address.)

"That's something I've never had before, but it makes sense," said Will. "At a cookout -- at least down here in Virginia -- you're gonna eat all that anyway. It looks great, tastes even better."

After washing down his parfait with a Cisco Brewers' Gripah Grapefruit IPA, Will was ready for the star of the show.

Yes, it was Cheesy Western time.

And Will was ready.

Tweet from @bensbiz: Ever heard of a Cheesy Western? Designated Eater Will Sloan enjoyed the ���@LynHillcats��� version during my road trip last month. pic.twitter.com/6LKhV5mLWe

"You get one of these at the T-Room, they're just iconic. I've eaten these since I was a kid," said Will, referring to Lynchburg's Texas Inn by its commonly used nickname. "This one is good. There's something about a fried egg on a hamburger, and I like the relish they have here. This is the best Cheesy Western I've had since last week."

And with that, Will's unprecedented tenure as an empty ballpark Designated Eater was done. Thanks, Will.