Yankees outfield prospect homers in ninth to cap his milestone 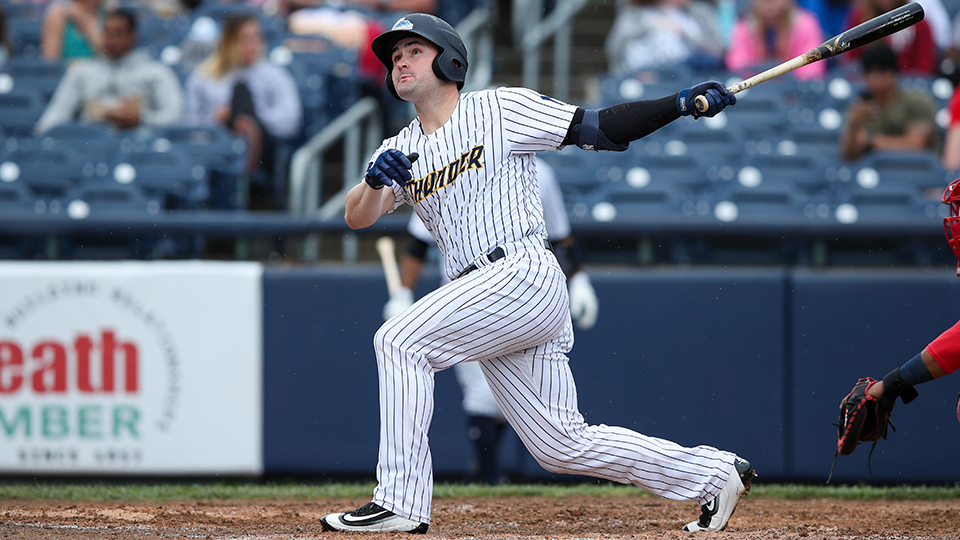 Matt Lipka has racked up seven hits in his last three games after his average fell to .197 on July 3. (Mike Dill/Trenton Thunder)

Stacking good at-bats has been Matt Lipka's goal since being sent to the Double-A Thunder on May 14. He had four to work with Thursday in his first game after the All-Star break. What he did with them could be the foundation for a resurgent second half.

The Yankees outfield prospect hit for the fourth cycle in Trenton history during a 5-3 loss to Reading at FirstEnergy Stadium.

Thairo Estrada had most recently pulled off the feat for the Thunder during Game 2 of the Eastern Division Championship Series on Sept. 7, 2017. And Lipka also had completed the milestone before with Class A Advanced Lynchburg on April 25, 2013.

But that was a different time and a few organizations ago. The Braves took Lipka with the 35th pick in the 2010 Draft. After seven seasons and before any Major League at-bats, they parted ways. The Rangers tried Lipka at Double-A Frisco for most of 2017 and the Giants employed him in 2018.

Free agency found him for the third consecutive offseason when the Yankees called, and with their offer came an invite to big league camp. Lipka posted a .900 OPS in 37 spring at-bats. He began the season with Triple-A Scranton/Wilkes-Barre and played what he considered to be some of the best baseball of his life, sporting a .281/.361/.453 slash line that didn't suffer despite a hamstring injury that sidelined him for two weeks.

"Things are finally in place," he thought then. "Everything with my game is rolling. I feel like I'm one step away."

But then he headed to Trenton instead of the Bronx. "It was just tough," Lipka said. He understood the reasoning behind the transaction. That didn't make it any easier.

The 27-year-old's average with the Thunder hit .100 on May 27. It was as low as .197 earlier this month. Lipka watched video and spent hours in the cage working on his bat path to find an answer. He kept the belief that he was a week away from finding the version of himself that was "awesome" for the RailRiders. The week of the Eastern League's All-Star Game came first.

Lipka spent time away from the game during the break. His parents live in Texas. He's playing in New Jersey. They met up at his brother's place in Georgia, and with nieces and nephews in tow spent time tubing on Lake Allatoona. He had not seen the family since the successful stint in the Grapefruit League that he thought put him position to finally make The Show.

"It was just nice to get away," Lipka said.

His second-half greeting was a one-out double in the third inning that rolled to the left-field corner and served as the Thunder's first hit against No. 7 Phillies prospect JoJo Romero. The 27-year-old tripled to left off the southpaw on the first pitch of the sixth and tied the game at 1-1 on Hoy Jun Park's single two batters later.

Facing left-hander Jakob Hernandez in the seventh, Lipka singled to right. He got one more at-bat in the top half of the ninth and capped the milestone with a long ball to left off lefty Jeff Singer, who retired the next two Trenton batters to end the game.

Yes, he admitted, he might have been swinging for the fences just a little bit. But the cycle meant a lot to him and his confidence.

"Usually when I'm going well, I don't extend at-bats," Lipka said. "I get a pitch I can hit and I end it. I've been missing that. I just felt that was there tonight."

Romero (4-3) allowed one run on four hits and a walk with six strikeouts over six innings.

Top Phillies prospect Alec Bohm led the Fightins' offense in his return from the All-Star Futures Game, going 2-for-4 with a solo homer and two RBIs.