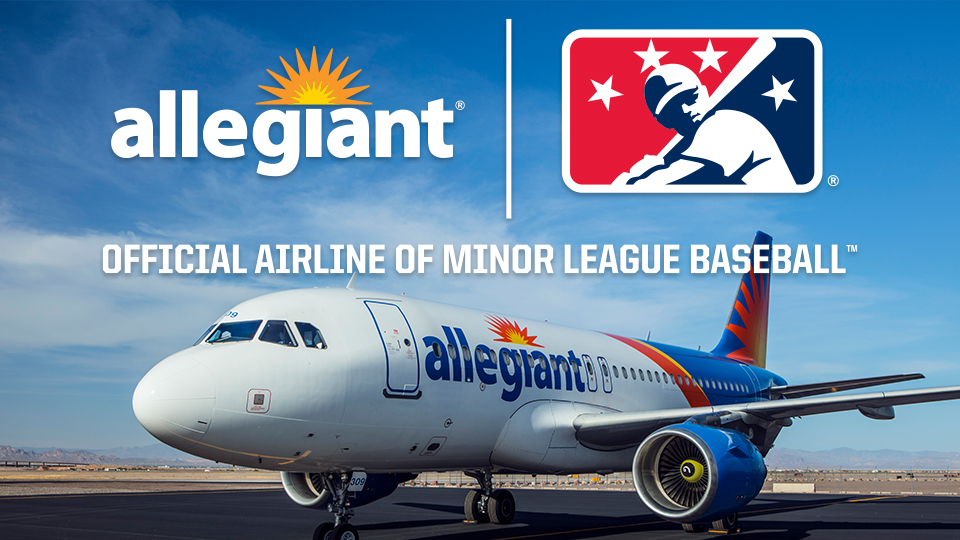 LAS VEGAS -- Minor League Baseball™ (MiLB™) and Allegiant (NASDAQ: ALGT) today announced the launch of a groundbreaking credit card partnership, the first of its kind between a sports property and airline. The agreement is an expansion of the current partnership between MiLB and Allegiant and will provide a compelling platform for bringing fan engagement and rewards to new heights.

The two brands announced a multiyear national partnership in July designating Allegiant as the "Official Airline of Minor League Baseball." With 126 current overlapping markets, Minor League Baseball and Allegiant are well positioned to provide access to affordable leisure activities, at the ballpark and at world-class destinations across the country.

The Allegiant World Mastercard® provides cardholders with benefits including points for every purchase and no blackout dates for travel and will enable fans to gain rewards specific to their favorite MiLB teams and local communities.

"The expansion of our partnership is a testament to the synergy between our two brands and Allegiant's commitment to MiLB," said David Wright, Chief Marketing and Commercial Officer for Minor League Baseball. "This new component of the partnership will give fans the opportunity to start earning rewards both at the ballpark and in their communities while continuing to support their favorite Minor League Baseball teams."

"Through our growing partnership with Minor League Baseball, Allegiant is able to reinforce our commitment to the communities we serve as their hometown airline by supporting their hometown teams," said Scott DeAngelo, Allegiant chief marketing officer. "We're thrilled to invite baseball fans across the country to share their team pride while enjoying all of the great benefits of our successful and much-loved credit card program."

Through the Allegiant Airline Network, powered by ISM Connect, participating teams will show customized content and programming on ISM screens, including information about the credit card partnership. As a result, the network will allow Allegiant, MiLB and participating teams to reach a larger, more diverse group of next-generation fans. More than 25 MiLB ballparks will have active ISM Connect screens at the start of the 2019 season. Allegiant will reach nearly 50 million individuals through this platform, driving engagement and modernizing the game day experience for MiLB fans.

To further reinforce the relationship between the two brands, Allegiant is serving as a Presenting Partner at the 2018 Baseball Winter Meetings, the largest gathering of baseball executives in the country, this week in Las Vegas.

Las Vegas-based Allegiant (NASDAQ: ALGT) is focused on linking travelers to world-class leisure destinations. The airline offers industry-low fares on an all-jet fleet while also offering other travel-related products such as hotel rooms and rental cars. All can be purchased only through the company website, Allegiant.com. Beginning with one aircraft and one route in 1999, the company has grown to over 80 aircraft and more than 300 routes across the country with base airfares less than half the cost of the average domestic roundtrip ticket. For downloadable press kit, including photos, visit: http://gofly.us/ToZT30iauev.