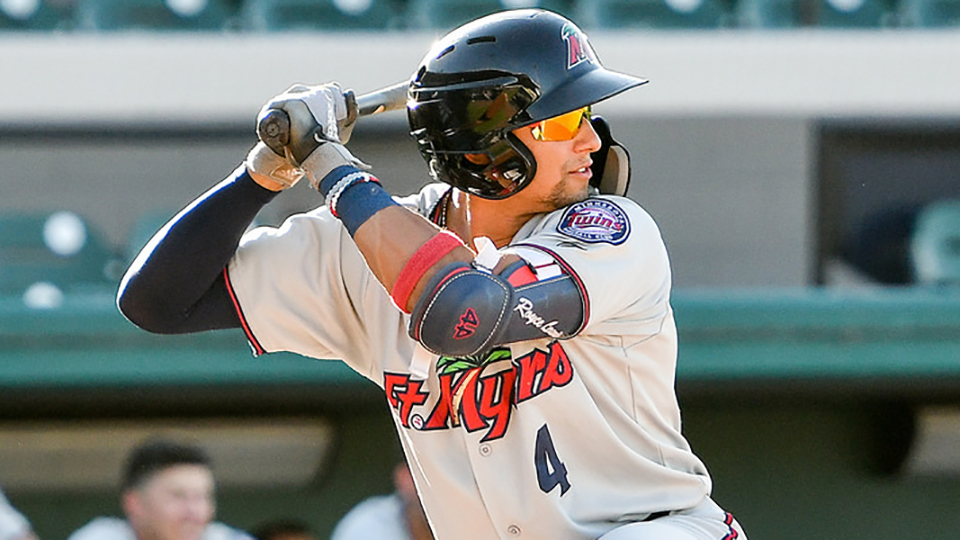 Royce Lewis is hitting .319 over 104 games between Class A and Class A Advanced this season. (Tom Hagerty/MiLB.com)

NYPL steals the spotlight: The New York-Penn League held the final All-Star Game of the 2018 season in State College. Before the exhibition even began, Pirates first-rounder Travis Swaggerty was told that he was being promoted from Class A Short Season West Virginia to ... Class A West Virginia. In the game itself, Mets prospect Ross Adolph took BUSH'S® All-Star MVP honors after homering and tripling early in a 7-1 South Division win. Meanwhile, Nationals No. 2 prospect Carter Kieboom, who played for New York-Penn League club Auburn last season, homered twice and scored five runs for Double-A Harrisburg.

Twins SS Royce Lewis, Class A Advanced Fort Myers: 2-for-5, HR, 3B, RBI, 2 R, K -- It's not often that players are promoted -- to the pitcher-friendly Florida State League no less -- and see their numbers improve, but that has been the case with the Twins' top prospect. Lewis now has hits in 10 straight games and is hitting .328/.412/.529 in 29 contests since joining the Miracle on July 14. That's an improvement over the .315/.368/.485 line he posted with Class A Cedar Rapids earlier this year. Lewis's homer Tuesday was his 13th between the two levels -- a sign that his power might be more advanced than previously believed. Already a special talent, the 19-year-old shortstop has worked his way into the No. 10 spot in MLB.com's overall rankings, and his stock isi only climbing.

Blue Jays 1B Rowdy Tellez, Triple-A Buffalo: 3-for-5, 2 HR, 3 RBI, 3 R -- Tellez was once one of the most notable bats in the Blue Jays system, namely after his 2017 season in which hit 23 homers and produced a .917 OPS at Double-A New Hampshire. After struggling with Triple-A Buffalo last season, he's slipped to No. 29 in the Toronto system and had been going through a rough patch (0-for-12 in his last three games) before this 14-5 win at Charlotte. With his second two-homer performance of the season, Tellez is now hitting .274/.343/.444 with 13 homers and 21 doubles in 100 games. That works out to a 120 wRC+, making Tellez an above-average Triple-A hitter in his second season at the level. That said, the 23-year-old is not a given to be added to the 40-man roster before he becomes Rule 5-eligible in November.

Red Sox RHP Tanner Houck, Class A Advanced Salem: 7 IP, 4 H, 1 R, 1 ER, 0 BB, 7 K, 72 pitches, 56 strikes -- It's been an uneven season for the No. 5 Red Sox prospect. To his credit, he has smoothed out the control issues that had been his biggest weakness in the early months of 2018. After an Aug. 9 outing when he gave up four earned runs on seven hits and two walks in just five frames, Houck was much more efficient Tuesday, needing only 72 pitches to get through seven frames and throwing only 16 of those for balls. The Red Sox have worked to transform Houck since they took him in the first round of the 2017 Draft, e.g. working more four-seamers into his repertoire, and the results are improving, if still inconsistent.

Ian Anderson vs. Brent Rooker: After being promoted to Mississippi last Wednesday, Anderson finally made his Double-A debut and had to go up against Chattanooga and Rooker, who ranks fifth in the Southern League with an .847 OPS this season. The Braves' No. 3 prospect handled the assignment well, getting Rooker to ground out to third base in the first inning and pop out to second in the fourth. He did, however, walk Rooker in the second frame -- one of Anderson's four free passes in his four innings. Control and efficiency were an issue for the 20-year-old right-hander, who needed 90 pitches just to complete his outing, but that's the point of sending him to Double-A -- letting him get accustomed to more patient hitters.

Padres 2B Luis Urias, Triple-A El Paso: 3-for-4, 2 2B, 2 R, BB, K -- The Padres seem intent on calling up MLB.com's No. 22 overall prospect when rosters expand in September, and he proved why they should with this three-hit showing. Urias is hitting .348/.392/.565 over 13 games this month. More on his performance in Michael Avallone's story here.