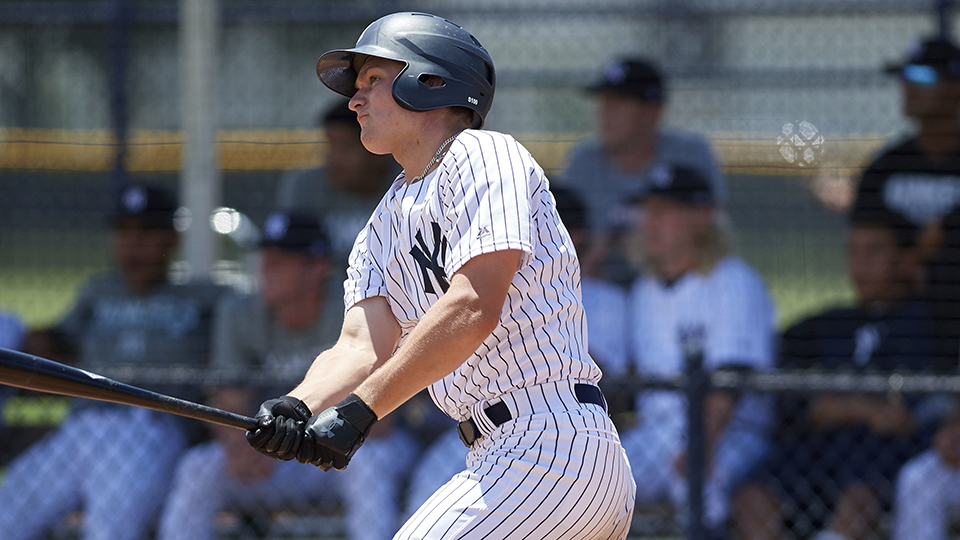 Pulaski's Ryder Green is hitting .300 with a 1.100 OPS through five games after his cycle on Sunday. (Mike Janes/Four Seam Images)

Ryder Green did more damage in the span of two innings than he had in his first four games of the season.

The Yankees' No. 23 prospect hit for the cycle, completing it with a seventh-inning double, as Rookie Advanced Pulaski rolled past Bluefield, 18-5, on Sunday at Calfee Park.

Green scored three times and drove in a pair of runs in his first four-hit game since the Yankees selected him in the third round last year's Draft.

The 19-year-old came into the game with two hits in his first 14 at-bats of the season but equaled that total with a single to center field in the first inning and a triple to center in the third. He reached on a throwing error to begin the Yankees' eight-run sixth and scored on Anthony Garcia's double.

Green blasted his second homer of the year to left-center later in the frame and completed the Minors' 11th cycle of the year with an RBI double to center in the seventh. Even after striking out in his final at-bat in the eighth, the four-hit performance raised his average 157 points to .300.

It had been nearly a year since an Appalachian League player hit for the cycle.Top Rays prospect Wander Franco did it last July 14 for Princeton. Nathan Mikolas was the last player to cycle for Pulaski on July 11, 2015 against Greeneville.

Oliver Dunn -- the Yankees' 11th-round pick in this month's Draft -- homered, fell a triple shy of the cycle and drove in a career-high five runs in his second game as a professional. Garcia also went deep and collected four RBIs, while Madison Santos contributed three hits. Trailing, 4-0, in the fifth, Pulaski scored 18 times in its final four turns at bat.

Elvis Peguero (1-0) allowed a hit and a walk with one strikeout in 1 2/3 innings of scoreless relief to notch the win.