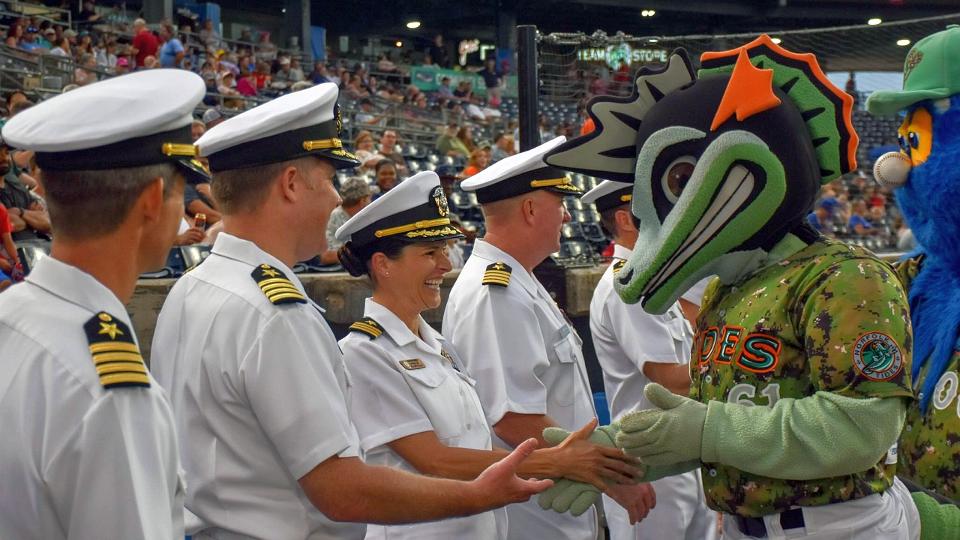 ST. PETERSBURG, Fla. -- Minor League Baseball announced today that the Norfolk Tides are the recipients of the third annual Charles K. Murphy Patriot Award. The Tides will receive the award at the Baseball Winter Meetings Banquet on Sunday, Dec. 9, at the Mandalay Bay Resort and Casino in Las Vegas.

The Charles K. Murphy Patriot Award is presented to a team or individual in Minor League Baseball for outstanding support of the United States Armed Forces and veterans, both at the ballpark and in the community. The award was created in 2016 in honor of the longtime Florida State League president and U.S. Army veteran who passed away Feb. 21, 2015, at the age of 83. A retired Lieutenant Colonel after 21 years in the U.S. Army, Murphy broke into professional baseball in 1975 and led the Florida State League from 1990 until his passing. He received the Warren Giles Award for outstanding service as a league president in both 2011 and 1991, and the Friends of Baseball Chapel Award in 1994.

"The Hampton Roads area is the largest military market in the country, so the military has long been an integral part of our community," said Tides General Manager Joe Gregory. "The Tides always strive to recognize the remarkable accomplishments of our veterans and active duty service members, so to be acknowledged as the recipient of this prestigious award is a truly special moment for our organization and the Hampton Roads area."

For winning the award, Minor League Baseball Charities will split a $5,000 donation between the Navy-Marine Corps Relief Society and the USO of Hampton Roads and Central Virginia on behalf of the Norfolk Tides organization.

In 2018, the Tides held nights dedicated to honoring each branch of the United States Armed Forces, as well as a season-long Salute to Service, where the team honored a fan-nominated veteran to be recognized and saluted for their service. During every home game, the Tides played Kate Smith's rendition of God Bless America while fan-submitted photos of active military members and veterans scrolled on the videoboard. As fans watched the videoboard at Harbor Park, they noticed a flag pole that hoisted a POW/MIA flag as well as an Honor and Remember flag, which is the national symbol of gratitude and respect for those who gave their lives in defense of our freedom.

Norfolk mascots Rip Tide and Triton made over 70 appearances at military events in the Hampton Roads area in 2018 and the Tides' reading program distributed over 1,000 free tickets to military families. The Tides established 13 locations at various military installations where military members could pick up discounted vouchers to attend Tides games. The team also offered Military Mondays throughout the season, where active and retired servicemen and servicewomen received discounts on tickets and merchandise at Harbor Park. In addition, the Tides provided veterans of the military with over 1,000 free tickets through the Tickets to Vets program.

The Tides have also shown their support to the military through annual contributions to the Chief Petty Officer Scholarship Fund and had nine veterans among their gameday staff in 2018. Tides players and coaches also got involved to help the local military community by holding a free baseball clinic on the field at Harbor Park for children living in the Lincoln Military Housing community.

"The Tides have done a tremendous job of supporting and engaging with the various branches of the United States Armed Forces in the Hampton Roads area both at the ballpark and in the community," said Minor League Baseball President & CEO Pat O'Conner. "Their efforts to recognize and salute active duty and retired military personnel is second to none in professional baseball and would have made Chuck Murphy proud, so it is my pleasure to honor them with the Charles K. Murphy Patriot Award."

"We have always strived to do as much as possible for the military in our community, and while we do it to honor those men and women for the sacrifices they made for us, it is very nice to be recognized for our efforts," said Tides owner Ken Young.