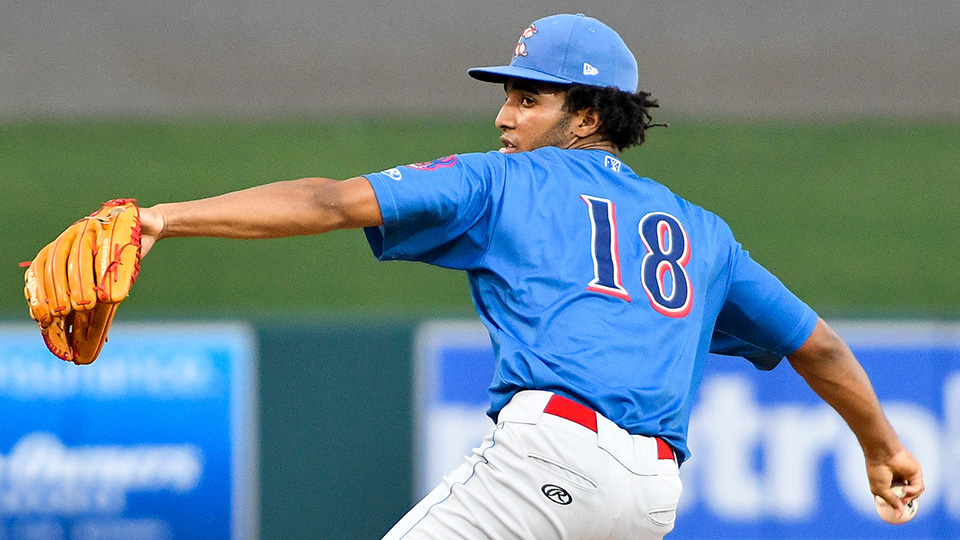 When the Phillies shipped Sixto Sanchez to Miami in the J.T. Realmuto trade, Medina assumed the position of the organization's top pitching prospect. But he's hardly second-rate.

The 22-year-old right-hander possesses a fastball that can reach 96 mph with considerable movement. He throws two 55-grade off-speed pitches, and if all three pitches are working well, good luck. Medina struck out 123 batters in 111 1/3 innings at Class A Advanced Clearwater last season and whiffed 133 for Class A Lakewood in 2017.

If Medina's stuff is why he's MLB.com's No. 77 overall prospect, his inability to harness it consistently is why he's yet to pitch in Double-A entering his sixth professional season. Despite an ability to fan hitters at an above-average rate, Medina posted a 4.12 ERA last year with a career-high 1.25 WHIP.

"Mainly, it's just locating his fastball," said Aaron Fultz, pitching coach at Double-A Reading. "His slider is outstanding, and he has a very good changeup. His issues have basically been fastball location -- just mainly being able to get the fastball to his glove side consistently."

Fultz spent the last three years in the same role with the Threshers, where Medina was last season. The two will likely be paired up again this summer with the Fightins after tinkering with some things to shore up command this spring. Those adjustments, along with improved pitch-sequencing, are what Fultz sees as the greatest keys to Medina turning flashes of brilliance into full-time wizardry.

At the start of camp, big league manager Gabe Kapler threw out words like "dirty" and "nasty" to describe Garcia's slider. It's possible Kapler gets the chance to see that slider in person this season if all goes well for the Phils' No. 28 prospect.

"It's hard to see," Fultz said of Garcia's slider. "It's sharp and late, and he has the ability to throw it for strikes as well as out of the zone for a swing and miss. It's just a phenomenal pitch, and he can go to it pretty much any time and be successful with it."

Garcia spent much of his career splitting time between Minor League bullpens and rotations. He pitched strictly in relief last year, though, and struck out out 68 batters in 58 2/3 innings to earn a promotion from Double-A to Triple-A Lehigh Valley. He struggled with the IronPigs, posting a 7.71 ERA in five appearances, but did enough in 2018 to earn an offseason spot on the 40-man roster and protection from the Rule 5 Draft.

The success of that slider relies on Garcia's ability to locate his 60-grade fastball, Fultz said. If Garcia can get a feel for both pitches early this season, he'll likely have a chance to earn some innings in the Majors. The Phillies have a 'pen that features several arms with options remaining, and those players will be shuffled between Philadelphia and Allentown to keep the unit as fresh as possible. Seranthony Dominguez and Austin Davis both earned innings last season in similar situations.

Last year's third overall pick in the Draft, Bohm was chosen because his bat projects to be a threat for both average and power in the big leagues. The Phillies didn't get much of a chance to preview that talent during his first taste of the pros after getting hit by a pitch that injured his shin last summer and limited him to 139 at-bats. The club's top prospect never truly got on track, batting .252 without a home run.

His first full campaign could begin in Class A Advanced Clearwater, given the club would love to see the 22-year-old rise quickly through the ranks. His plate discipline could be the biggest accelerator; in his junior season at Wichita State -- during which he hit .339/.436/.625 with 16 home runs -- Bohm earned 39 walks and struck out only 28 times.

The Phillies like Bohm at third base, though some doubt the No. 59 overall prospect has the ability to stick there. He'll get every chance to prove those notions wrong.

At the crossroads: Mickey Moniak, OF

Moniak's career will be far from over if he has an average or even bad year. He doesn't turn 21 until May. He was not the first baseball player to struggle in his first pro seasons out of high school. But for an idea about how his career has arched since being selected first overall in 2016, here is where he's been slotted in the Phillies' prospect rankings: No. 1 in 2017, No. 5 in 2018, No. 9 entering this season.

Expectations were always going to be high for the top pick, and Moniak did not meet them initially. He hit .236 in 466 at-bats during his first full season in Class A Lakewood. Last year with Class A Advanced Clearwater began similarly as Moniak batted .213 with just four extra-base hits in April.

Things changed in the second half, when Moniak improved each month. He hit .277 in July and .311 in August, striking out just 12 times in that final full month. Fultz, who saw every Moniak at-bat in person last season, said the improvement in his pitch recognition was amazing.

"I think for me it was just going out and having fun again, kind of putting pressure aside and just saying, hey, just go out and try to help your team win," Moniak told Philly.com this spring. "The thing that I told myself was just go out and do something cool today."

A better eye, a better attitude and more muscle -- Moniak reportedly added at least 20 pounds this offseason -- and the outfielder could be poised to reach the upper levels of the system if he performs as he did at the end of last season. With Bryce Harper occupying an outfield spot in Citizens Bank Park for years to come, the pressure on Moniak has lightened. The best-case scenario for 2019 should see Moniak get the bulk of his at-bats at Double-A Reading, even if he starts the year back in the Florida State League.

This is a packed group. The one who performs best early on could find himself in the back end of the Major League rotation should a spot open up.

Drew Anderson might get first dibs. The 25-year-old right-hander made one big league start last season and impressed this spring, allowing one earned run on six hits over 12 1/3 innings (0.71 ERA). No. 6 prospect Enyel De Los Santos and Ranger Suarez (No. 10) made spot starts last year and posted ERAs of 2.63 and 2.74, respectively, for the IronPigs. Cole Irvin (No. 16) has topped 150 innings in both of his first full seasons as a pro, and his 2.57 ERA led the International League in 2018.

"He's been a complete pitcher," Fultz said of Irvin. "The thing about him is he keeps the ball down so well and he has a really good feel for it. … If [the Phillies] need anyone, he's definitely one that fits the bill. He could force the issue if he repeats last year's success."

It doesn't help Irvin that he's not yet on the 40-man roster. The same goes for fellow southpaw JoJo Romero (No. 7), who struck out 40 and posted a 1.32 ERA in his last six starts in Double-A before being shut down with an oblique injury.

With an expectation to compete for an NL East title, the Phillies may not show much patience if starters such as Zach Eflin or Vince Velasquez struggle in the early going. If one should suffer an injury or falter in the first few months, expect one of the several prospects mentioned above to get their chance in red pinstripes.

More to keep an eye on: 2017 first-round pick Adam Haseley -- the club's third-ranked prospect -- hit .316/.403/.478 in 136 at-bats in Double-A to close out his first full season. The 22-year-old might start the season in Triple-A, and a strong year could see him make a cameo in the Major League outfield by year's end. … 18-year-old shortstop Luis Garcia (No. 4) should make his highly anticipated full-season debut with Class A Lakewood after hitting .369 with 12 stolen bases in the Gulf Coast League last year. … David Parkinson (No. 21) led the Minors last year with a 1.45 ERA. He and Spencer Howard (No. 5) headline a deep second wave of pitchers who should start knocking on the door to the upper levels as the year goes on.

Most home runs in the system: Jose Pujols
Most stolen bases: Malquin Canelo
Most strikeouts: Howard
Current prospect to get most Major League playing time: De Los Santos
Non-Top 100 prospect to end 2019 in the Top 100: Garcia