Prize has honored Woman Executive of the Year since 1976 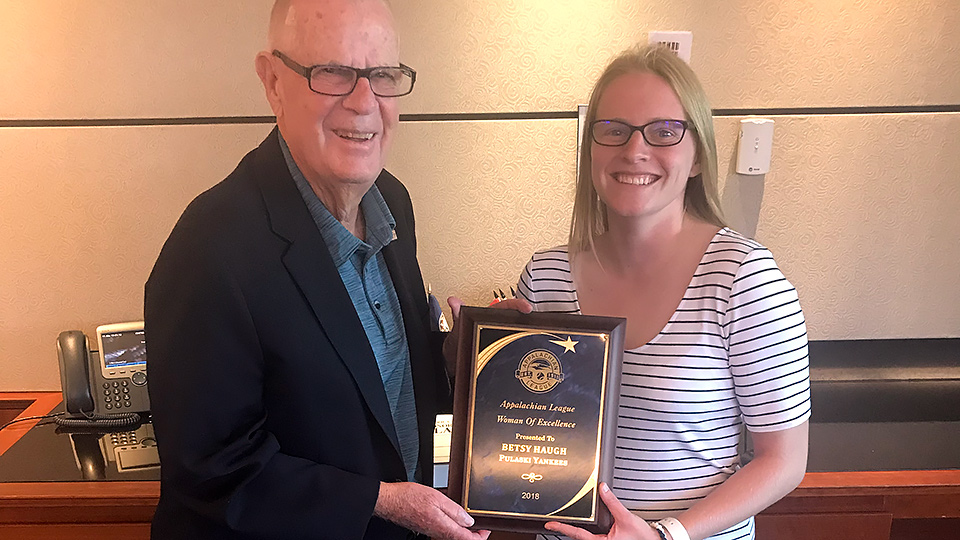 ST. PETERSBURG, Fla. -- Minor League Baseball and Rawlings Sporting Goods Company, Inc. announced today that Pulaski Yankees General Manager Betsy Haugh has been named the recipient of the 42nd Rawlings Woman Executive of the Year Award. Since 1976, the Rawlings Woman Executive of the Year Award has been presented annually to a woman who has made outstanding contributions to her club or league, or to baseball. Haugh will receive the award at the Baseball Winter Meetings Awards Luncheon on Monday, Dec. 10, at the Mandalay Bay Resort and Casino in Las Vegas.

After joining the Pulaski Yankees as Assistant General Manager prior to the 2018 season, Haugh helped Pulaski set a new league single-season attendance record at Calfee Park. As Assistant General Manager, Haugh oversaw social media marketing, sales, media relations, management of the retail store, community outreach and the team's internship program. Her work upgrading the team's website made Pulaski the first team in the league to launch their responsive website. She then assisted other Appalachian League clubs in getting their responsive websites up and running. Following the 2018 season, she was named General Manager of the Pulaski Yankees.

"To be selected as the recipient of this award is extremely humbling considering how many amazing, talented women work in this industry and I feel honored to work among them daily and am so blessed to be a part of the Minor League Baseball family," said Haugh. "I truly thank everyone at the Pulaski Yankees, in the Appalachian League, and across the industry who has supported me and helped me receive this honor."

"Betsy has not only helped the Danville and Pulaski clubs reach new heights over the last few years in several roles, but her willingness to assist the Appalachian League office on so many fronts made her a logical selection for this honor," said Minor League Baseball President & CEO Pat O'Conner. "Her versatility, energy and passion for Minor League Baseball will undoubtedly take her to great places in this game and on behalf of Minor League Baseball, I congratulate Betsy on being named the 2018 Rawlings Woman Executive of the Year."

"Betsy's knowledge of Minor League Baseball and the business side of the game is almost overwhelming, particularly for someone of her age," said Pulaski Yankees owner David Hagan. "Her energy is just relentless and when you can combine knowledge and energy, that is hard to beat."

"The Appalachian League is honored to have Betsy selected for this award as she is a great representative of the Pulaski Yankees and our entire league," said Appalachian League President Lee Landers. "She is a true professional and no task is beneath her."

"When we first interviewed her, we knew right away she had the abilities and qualities we were looking for and once she got here, she took it upon herself to learn all facets of our organization, which at this level, is very important," said Danville Braves Vice President and General Manager David Cross. "We hated to lose her, but we know she has a very bright future in professional baseball."

Haugh earned her bachelor's degree in sports management and marketing from Marshall University and her master's degree in communications from Virginia Tech. The Earlysville, Virginia native played on the women's soccer team for two years at Marshall before joining the sports information department as an intern.