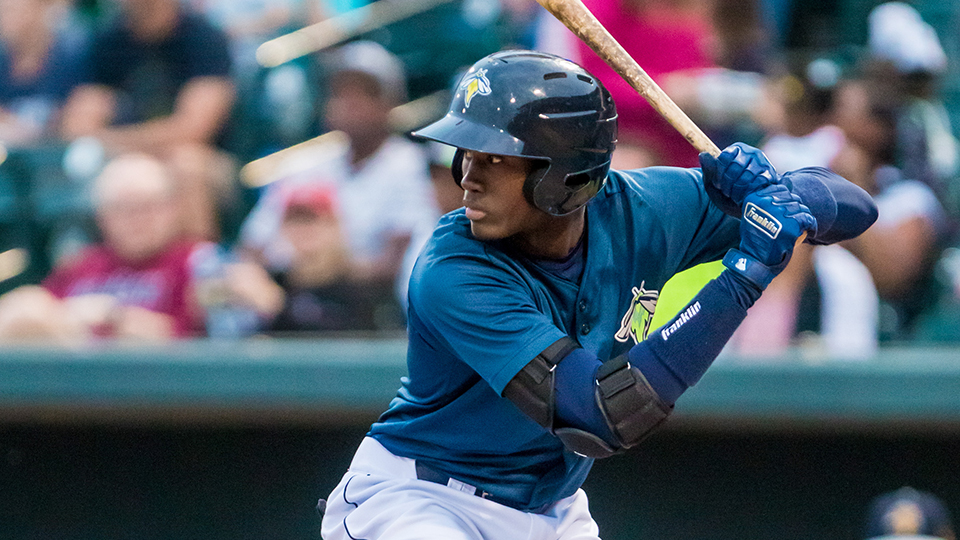 Ronny Mauricio was a South Atlantic League midseason All-Star as an 18-year-old in 2019. (Jeff Blake/Columbia Fireflies)

The differences between the Mets at this point last year and now go far deeper than an overhaul in front office personnel. Agent-turned-general manager Brodie Van Wagenen wanted to make an early splash on last year's Hot Stove and he did just that. Van Wagenen engineered a deal that sent 2018 first-round Draft pick Jarred Kelenic (the club's No. 3 prospect at the time) and Justin Dunn (No. 4) to Seattle in exchange for eight-time All-Star Robinson Cano and Edwin Diaz.

Van Wagenen then orchestrated a midseason trade that sent top pitching prospect Anthony Kay and 18-year-old Simeon Woods Richardson to the Blue Jays for Marcus Stroman. The swaps made a dent in the prospect pool, but a strong 2019 Draft netted New York several notable picks, including first-rounder Brett Baty and third-rounder Matthew Allan, who immediately became two of their top prospects.

What the organization currently lacks in upper-level talent, it makes up for in projectable star power. No. 2 Mets prospect Baty joins top-ranked Ronny Mauricio and No. 3 Andres Gimenez on MLB.com's Top 100 Prospects list. Two more teenagers -- No. 5 Francisco Alvarez and sixth-ranked Mark Vientos -- plus 2017 first-round pick David Peterson (No. 7) give New York an intriguing group among its top 10, albeit one that may take a little longer to reach Queens.

Catcher -- Rene Rivera, Syracuse (97 games), New York (nine games): Signed at the end of Spring Training, Rivera made his 19th professional season his best as he established career highs with 25 home runs and 73 RBIs. The 36-year-old's campaign included a pair of three-homer games on June 30 and Aug. 9. Rivera -- who had never gone yard more than 11 times during a single season in the Majors or the Minors -- batted .254/.319/.501 in 97 games with Syracuse before he returned to the bigs on Aug. 24. The Mariners' second-round pick of the 2001 Draft remained an elite arm behind the plate, throwing out 51.7 percent of attempted basestealers.

First baseman -- Travis Taijeron, Syracuse (123 games): Another former Met who was brought back into the fold, Taijeron supplied the organization with a trademark potent offensive season. Normally an outfielder, the 30-year-old spent most of his time at first base in 2019 and cleared the 20-homer plateau for the fourth time in nine Minor League seasons. Taijeron went deep 24 times, drove in 70 runs and collected 48 extra-base hits en route to an .860 OPS in 371 at-bats. The native of La Mesa, California, hit for the cycle on May 31.

Second baseman -- Luis Carpio, Binghamton (82 games), St. Lucie (31 games): Carpio isn't mentioned in the same breath as some of the organization's more high-profile middle infielders, but the No. 29 prospect is beginning to make some noise. A hot start with Class A Advanced St. Lucie pushed the 22-year-old up to Double-A Binghamton, where he continued to be a steady hitter. Overall, Carpio batted .282/.361/.380 while playing strong defense, as he's done throughout his career.

"Luis did a really nice job down in the Florida State League and was rewarded for his good start," said Mets executive director of player development Jared Banner. "He's got tremendous positional versatility, he's coachable and it was nice to see him have the year he did. The ability to play around the infield is part of what makes him a special player for us and it's one of the things we look for in our prospects."

Third baseman -- Mark Vientos, Columbia (111 games): Vientos played the entire year in the Class A South Atlantic League as a 19-year-old and showed the promise and growth the Mets expected of him. Possessing tremendous bat speed and strength within his 6-foot-4, 185-pound frame, Vientos reached double digits in homers (12) for the second straight year and compiled 40 extra-base hits and 62 RBIs despite a poor first half. The Mets were conservative with Vientos in his first full season, giving him regularly scheduled days off early in the year to keep him fresh. The strategy paid off. The 2017 second-rounder hit .271/.315/.462 while increasing his OPS 127 points to .777 in the second half.

"Mark has a unique ability to impact the game in all phases," Banner said. "He keeps himself in great physical shape, and I think that served him well in his first full season. The most important thing from our vantage point was seeing the improvements he made as the year went on. He got off to a slow start but made the adjustments, battled through it and came out of it a better player. That goes for his offense and defense, which made major strides."

Shortstop -- Ronny Mauricio, Columbia (116 games): Mauricio broke into the Top-100 prospects for the first time this year, and with good reason. Joining fellow teenager Vientos on the left side of the Fireflies infield, the native of the Dominican Republic celebrated his 18th birthday days before the 2019 season began. Mauricio surpassed expectations and was recognized with an Sally League All-Star Game selection.

Unlike Vientos, who excelled late in the year, Mauricio slumped in the second half. But the Mets were still thrilled with his overall production. He batted .268/.307/.357 with 29 extra-base hits while competing in a league in which the average age of players was nearly 22. As young as he is, the 6-foot-3, 166-pounder's raw power is beginning to emerge, and he combines soft hands and a strong arm on defense to project as a complete player.

"We're very excited about Ronny. To be his age and go to a full-season affiliate and play like that was truly impressive," Banner said. "In addition to the tools he has, he showed great strides and a maturity that exceeds his years. He showed up with great professionalism every day, even when the length of the season began to wear him down later in the year. ... But to say we were thrilled with what he did would be an understatement. ... He's an electric player."

Arismendy Alcantara, Syracuse (92 games), Binghamton (27 games): After spending 2018 in the unaffiliated Mexican League, Alcantara signed a free-agent deal in February and gave the Mets a veteran presence in their crowded outfield at Binghamton and Syracuse. Although he missed out on a promotion to New York, it wasn't for a lack of results. Alcantara batted .286/.354/.480 with 42 extra-base hits and tied his career high with 15 home runs in 119 games.

Jason Krizan, Binghamton (97 games), Syracuse (20 games): A former Tigers prospect, Krizan made a positive impression in his debut season with the Mets. At 30 years old, the Austin, Texas, native might not be on anyone's list of Minor Leaguers to keep an eye on, but his versatility in the outfield coupled with a solid offensive game could land him a spot on a Major League bench. Krizan posted a .827 OPS in large part due to 46 extra-base hits across 117 games in the Eastern and International Leagues.

Wagner Lagrange, Columbia (71 games), St. Lucie (36 games): Lagrange appeared to be one of the club's up-and-coming outfielders after hitting .330/.379/.460 in 58 games in 2017. His numbers haven't quite measured up since, but the 24-year-old has shown the ability to make consistent contact. Competing in his first full season, Lagrange batted .286 and demonstrated some gap power with 36 extra-base hits and a .758 OPS in 107 games. But without the benefit of speed or home run potential, the native of the Dominican Republic will need to trend toward his 2017 production to garner serious attention as a prospect.

Utility player -- Dilson Herrera, Syracuse (117 games): Once thought of as the Mets' second baseman of the future, Herrera didn't get the call to Queens in his return to the organization, despite enjoying the best season of his career. The Colombia native reached the 20-homer mark for the first time and ended 2019 with a career-best 54 extra-base hits and an .832 OPS while playing five different positions. Although Herrera completed his ninth pro season, he is still 25 years old and has a potent bat that has yet to translate to success in the Majors.

Right-handed starter -- Harol Gonzalez, Binghamton (17 games, 16 starts), Syracuse (eight games, seven starts): Neither his stuff nor his status as a prospect jumps out, but one thing Gonzalez has done consistently is get outs. He added an exclamation point to that with Binghamton's first no-hitter in 13 years en route to midseason Eastern League All-Star honors. The no-no may have been the 24-year-old's crowning achievement in 2019, but it was hardly his only highlight. The native of the Dominican Republic set personal bests across the board and finished 12-4 with a 3.01 ERA and a 1.08 WHIP while holding opponents to a .228 average.

"Harol had a terrific season," Banner said. "He keeps his team in games and really knows how to pitch to whatever situation he's in. He's not going to overpower anyone, but his ability to locate and change speeds has been key to his success. To see him rebound [from a 1-16 season in 2018] was impressive and shows he's got plenty of moxie."

Left-handed starter -- Kevin Smith, St. Lucie (17 starts), Binghamton (six starts): New York correctly assumed Smith would climb quickly after selecting him in the seventh round of the 2018 Draft. The Georgia native was virtually unhittable in his pro debut at Class A Short Season Brooklyn that summer and carried that success into his first full season in 2019. Smith led the organization with 130 strikeouts and posted a 3.15 ERA while allowing only six home runs in 117 innings. The 22-year-old's fastball sits in the low-90s, but his 6-foot-5 frame and extension helps him get on top of opposing hitters quickly. He has a second swing-and-miss pitch in a slider that complements his deceptive heat, and he's developed a changeup that's becoming a solid third offering.

Video: Binghamton's Smith with the K

"Kevin really had an impressive year, especially it being his first full season," Banner said. "He's got a unique ability to keep the ball off the barrel [of the bat] with all three of his pitches. We were pleased at his ability to remain consistent after his promotion to Double-A, which is generally the hardest jump to make."

Relief pitcher -- Blake Taylor, St. Lucie (21 games), Binghamton (18 games), Syracuse (one game): The Mets moved Taylor into the bullpen after he struggled to a 5.40 ERA in 2018, and it's been a rousing success. Using a mid-90s fastball, the 24-year-old limited opponents to a .201 average and fanned 74 batters while posting a 2.16 ERA in 66 1/3 innings. His regular-season success continued in the Arizona Fall League, where he posted a 2.00 ERA and a 11-to-2 strikeout-to-walk ratio in nine frames for Scottsdale.

"Blake always had the power lefty arm, but the move to the bullpen really allowed him to take off," Banner said. "His stuff improved markedly, he threw strikes and got so many key outs for us. It's a credit to the work he put in and being added to the 40-man roster was a well-deserved reward for that success."