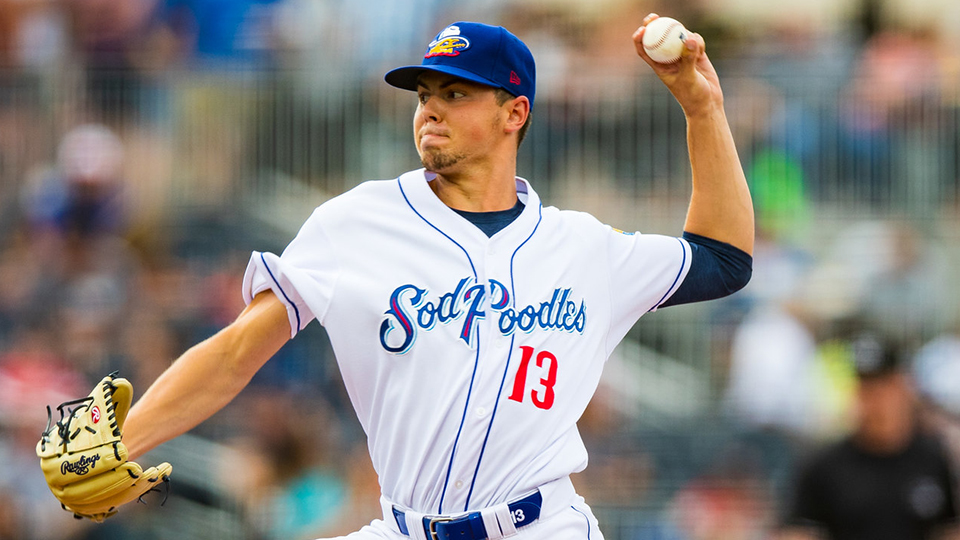 The 2018 season left MacKenzie Gore disappointed. The top Padres prospect was limited by lingering problems with a finger on his pitching hand and he went into the offseason determined.

He took out that frustration on hitters this year.

Gore, a 6-foot-3 left-hander and MLB.com's fourth overall prospect, was dominant for most of the campaign, going 9-2 with a 1.69 ERA between Class A Advanced Lake Elsinore and Double-A Amarillo. He held opponents to a .164 average while striking out 135 over 101 innings.

That nagging finger problem? A thing of the past. For his standout season, Gore is the MiLB.com staff pick for the Starting Pitcher of the Year MiLBY.

"That was important that I was healthy all year, just from a lack of workload standpoint so I could keep handling more innings as they came," Gore said. "[Last year] kind of put me behind the eight-ball a little bit, but this year was huge just from an innings standpoint."

Starting the year in the California League, the 20-year-old baffled hitters while building up strength in his arm. After 15 starts for the Storm, Gore was 7-1 with a minuscule 1.02 ERA, allowing nine earned runs over 79 1/3 frames. For Padres director of player development Ben Sestanovich, it was clear that a promotion was warranted.

"I think the biggest thing this year for him was taking the ball every sixth day, and that put him in a position to make some real strides," Sestanovich said. "Generally, players gives us a good sense of when they are ready. Obviously, his performance this year kind of puts him in a place that makes it possible for him to do a lot of things next year."

The transition to Double-A, which many players find to be the hardest in the Minor Leagues, went smoothly for Gore. In his debut against Frisco, he gave up two hits and a walk while hitting a batter and striking out four over 5 1/3 scoreless innings. For him, nothing about the game was different.

"The amount of preparation was the same," Gore said. "Nothing changed from that, but the hitters are older and their approach is a little better."

There was only one problem, according to Sestanovich, and it wasn't that big of a problem to have.

"One result of having a pretty dominant year is that you don't pitch with a ton of traffic on the basepaths, but I think that is something that he's just going to have to continue to get exposed to as he moves up the ladder," he said. "But that's through no fault of his own."

Of course, there were other obstacles, particularly not overworking a young, talented arm that, two years earlier, had totaled only 82 innings. That translated to a strict pitch count -- Gore's highest single-game total was exactly 100 -- and closely monitoring his innings. No reason to overtax the future ace of your pitching staff.

"We got to a point in the year where we needed to slow him down a little bit and got to a point in August where we felt getting him out of competition for a period of time made sense as a way to control the workload," Sestanovich said.

"No one wants to get set down," Gore added. "It ended up working out great. That's just part of it. You do what you are told. My last outing, my stuff was back to where it needed to be."

That last start lasted 1 2/3 innings, but each out was a strikeout as the southpaw worked around a walk. Two months earlier against Rancho Cucamonga, Gore allowed three hits and three walks while striking out nine over seven scoreless innings in his longest start as a pro. It began an impressive streak in which he threw 19 scoreless innings as the pitch count was helping him become more effective.

"In July, I just started to get better and better and was just trying to be efficient because they weren't just going to let me go out there and throw 120 pitches," Gore said. "I had to figure out a way to get seven innings within the pitch count. I was just efficient that day, a lot of strikes and aggressive in the zone."

Throughout the season, Sestanovich saw what made Gore such a hot commodity among scouts at Whiteville High School in North Carolina. San Diego scooped him up with the third overall pick in the 2017 Draft.

"I think Mark Connor and his crew did a great job with just getting to know MacKenzie and getting to know the person," Sestanovich said. "Everything we heard about him leading up to the Draft and before he reported to us was pretty spot-on. The work ethic, the competitiveness, the quality of teammate, all the things that our amateur scouts identified in terms of his makeup became pretty clear when he first put on a Padres uniform.

"I think one of MacKenzie's strengths is just his competitiveness. Between the ears, his ability to slow the game down and compete is in a really good spot."

In the middle of the season, as he shot up the prospect rankings, Gore was chosen to participate in the All-Star Futures Game. Entering in the second inning, he issued a leadoff walk to top Angels prospect Jo Adell but picked him off first base and retired top Mariners prospect Jarred Kelenic and fourth-ranked Evan White.

"It was a lot of fun," Gore said. "It was a good experience just to be around all those guys. We ... just had a good time with it, so that was awesome. I was glad I was able to do it."

After winning the Texas League championship with Amarillo, Gore remains hungry and looks to complete his climb through the Padres system.

"Personally, I have had some time this offseason to reflect on the year and see what I need to get better at," he said. "[Last year] left a bad taste in my mouth, so I went to the offseason really ready to go and I've done a good job of that this year so far but just making the same amount of strides this offseason as I did last offseason."

MacKenzie Gore wasn't the only tall southpaw to enjoy a standout season.

Kris Bubic, the sixth-ranked Royals prospect, brought electric stuff in only his second year as a pro, posting a 11-5 record and 2.23 ERA across both Class A levels. Over 149 1/3 innings, he recorded a Minor League-leading 185 strikeouts while walking 42. The 22-year-old, who spent last summer in the Pioneer League, was so good to start the season in the South Atlantic League that he was promoted after nine starts.

Bubic didn't miss a beat after moving up to the Carolina League. Three times for Wilmington, Bubic recorded 11 strikeouts, one short of the career high he set on April 12 for Lexington. In 17 starts with the Blue Rocks, the 6-foot-3 California native went 7-4 with a 2.30 ERA and 110 punchouts.

While it remains to be seen what the Stanford product will do for an encore in 2020, he can add the fans' selection as Starting Pitcher of the Year to his growing resume.