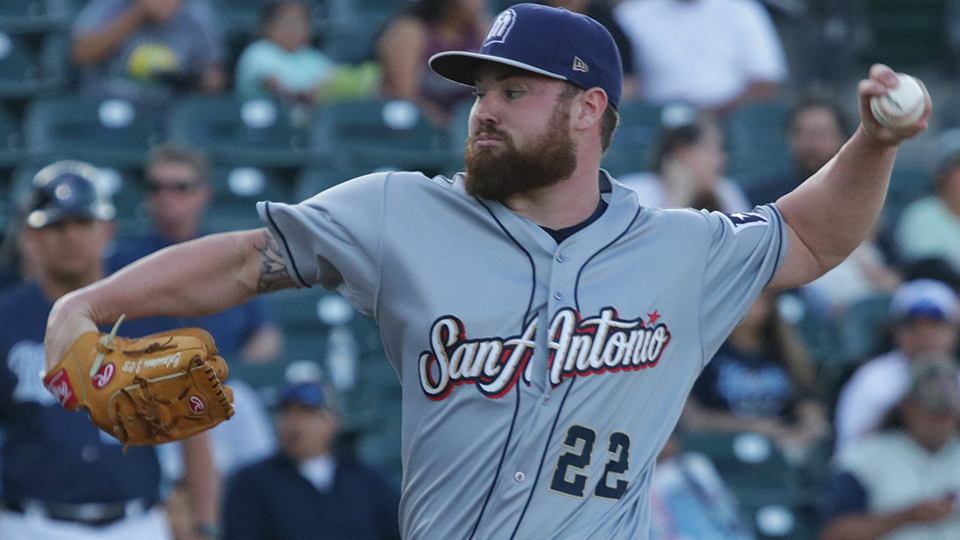 Logan Allen led the Texas League with a 2.75 ERA before being promoted to Triple-A (Tammy Tucker/MiLB.com)

The Padres' No. 8 prospect spun six scoreless innings, scattering four hits and three walks while striking out six, as El Paso held on for a 2-1 win over Sacramento on Saturday at Raley Field.

MLB.com's No. 87 overall prospect cruised through four innings, allowing two baserunners, none into scoring position. He labored in the fifth, yielding a single to Kelby Tomlinson and walking Orlando Calixte before striking out Jordan Johnson to escape unscathed.

In the sixth Peter Bourjos poked a leadoff single and Myles Schroder and Giants No. 5 prospect Chris Shaw walked to load the bases with one out. But Allen (1-0) squelched the threat by getting Miguel Gomez to fly out and fanning Tomlinson.

The left-hander earned a promotion to the Pacific Coast League after going 10-6 with a Texas League-leading 2.75 ERA in 20 games, including 19 starts, with Double-A San Antonio. He leads the Padres system with 11 wins across the two levels.

A large part of his success this year is the improvement of his curveball, which is turning into a plus pitch the Florida native.

"I feel like it's a really good pitch now," Allen told MiLB.com last month. "When I got drafted, I felt like it was a pretty good pitch, but when I got into pro ball, I thought I had to fine-tune it and it never really clicked. Now it's much better. It's much harder. It's a tighter spin."

Allen was selected by the Red Sox in the eighth round of the 2015 Draft and traded to the Padres in the Craig Kimbrel deal in November 2015. He broke last season, going 5-4 with a 2.11 ERA and .201 opponents' batting average for Class A Fort Wayne to earn a promotion to Class A Advanced Lake Elsinore. The southpaw held his own in the hitter-friendly California League, posting a 3.97 ERA in 11 games, including 10 starts.

Kazuhisa Makita followed Allen on Saturday and fanned two in a 1-2-3 seventh. Kyle McGrath gave up an unearned run in the eighth, but Rowan Wick struck out two over 1 1/3 perfect innings to earn his fourth save.

Allen Craig gave El Paso a 1-0 lead in the fourth with his 13th homer and Raffy Lopez padded it with an RBI single in the sixth.

Josh Horton is a contributor to MiLB.com. Follow him on Twitter @joshhorton22 This story was not subject to the approval of the National Association of Professional Baseball Leagues or its clubs.