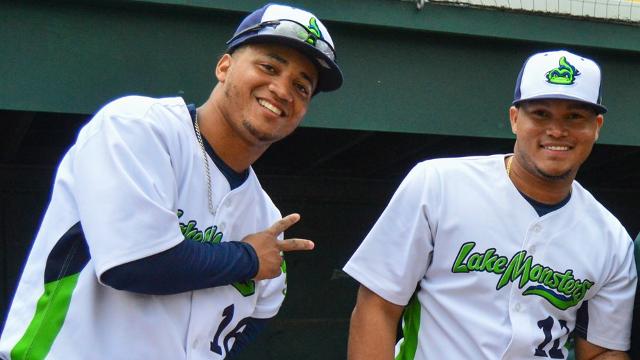 The Lake Monsters needed the second triple play in their history to stay in Wednesday's game.

A's No. 26 prospect Jordan Diaz, Nick Ward and Christopher Quintin went around the horn in the fifth inning of Class A Short Season Vermont's eventual 5-4 loss to Hudson Valley at Centennial Field.

Angello Infante relieved Richard Guasch to begin the fifth. The right-hander gave up a first-pitch single to Jacson McGowan and plunked Garrett Hiott. Vermont played at double-play depth with third baseman Diaz off the line, Nieckula said. Carlos Vargas then grounded a 2-1 pitch to third.

"Diaz came in, fielded the ground ball," Nieckula said, "went to third, took him to his right a little bit, stepped on third and fired a dart over to second base."

Ward caught it and made a snap throw to first baseman Quintin to complete the second triple play in Lake Monsters history.

"Nick Ward probably turned the quickest double play that he's ever turned in his life," Nieckula said. "Quintin did an excellent job on his stretch to receive the ball as quickly as possible."

The skipper initially didn't think Diaz was going to throw to second base.

"It happened so quickly," Nieckula said. "When he threw it to second, I was looking at the runner to see where the baserunner was and I didn't get a chance to see the umpire. I thought maybe the umpire called him safe."

The next thing the manager heard was the roar of the home crowd.

"I had a smile on my face," he said. "How could I not? It's an exciting play. We were all very jubilant and overwhelmed with emotion in the dugout. ... I just went up to Diaz, Ward and Quintin and congratulated them for accomplishing that tremendous feat."

The first triple play in team history came on July 9, 2017, also against Hudson Valley at Centennial Field, on a lineout 4-6-3 trifecta. Vermont won that game, 5-4.

The game remained scoreless until the eighth, when the Renegades scored three unearned runs. After Vermont cut the lead to 3-2 on a balk and a wild pitch, Cristhian Pedroza belted a two-run homer in the ninth to put Hudson Valley up for good. Yerdel Vargas raced for a two-run, inside-the-park dinger in the bottom half for the Lake Monsters, but Hector Figueroa recorded the final two outs to pick up his first save.

"You get a triple play and an inside-the-park homer in the same game," Nieckula said. "Check the record books to see if that ever happened."