It is with great sadness that the Trenton Thunder announces that Team Bat Dog Derby passed away on Saturday January 6, 2018; just 20 days shy of his tenth birthday after a battle with cancer."Derby was one of the biggest parts of our identity in the nine years of his 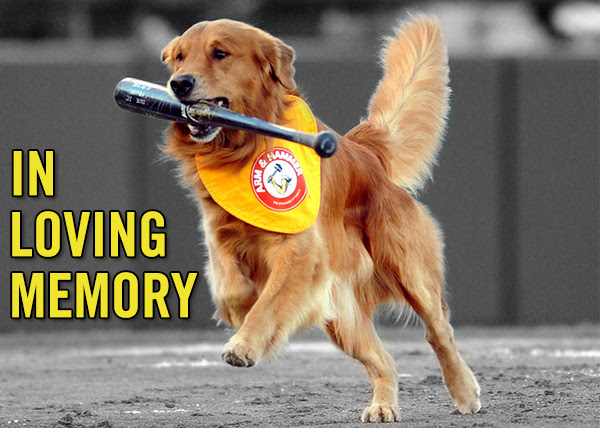 It is with great sadness that the Trenton Thunder announces that Team Bat Dog Derby passed away on Saturday January 6, 2018; just 20 days shy of his tenth birthday after a battle with cancer.
"Derby was one of the biggest parts of our identity in the nine years of his life and it breaks my heart to share this news with our fans ahead of our 25th season," said Thunder GM/COO Jeff Hurley. "His presence at our games and in the community was massive and every person and dog that interacted with him will miss him dearly."
Home Run Derby was born on January 26, 2008 as part of a litter of four boys and two girls from legendary Thunder Bat Dog, Chase That Golden Thunder. One of Derby's brothers, Ollie, served as a Bat Dog for the New Hampshire Fisher Cats (Toronto Blue Jays) until his retirement in 2016.
"In Derby's memory, we will celebrate Derby Day on Friday, January 26th and share a special tribute video and I encourage all of our fans to share their favorite memories, photos and videos with us via social media," said Hurley.
Derby made his on-field debut with Dad at his side in April of 2008 and trained to share bat dog duties with Chase in the ensuing years. Derby followed in his father's paw steps and retrieved his first bat on April 8, 2010.
In addition to his duties as bat dog, Derby brought bottled water to umpires on some of the hottest days at ARM & HAMMER Park. Derby also made regular Meet & Greet appearances with fans in the stadium and at various events at schools and community events. Derby made special appearances with other Minor League Baseball teams in his life at the Reading Fightin Phils (Philadelphia Phillies), Lakewood BlueClaws (Philadelphia Phillies, Single-A) and Scranton/Wilkes-Barre Railriders (New York Yankees, Triple-A). One of Derby's most memorable appearances was playing basketball with the Harlem Globetrotters in 2015.
One of the enduring memories of Derby's life will be his pre-game routine with the starting pitcher and catcher during his younger days. Derby would start his gameday experience by running onto the field and into the Thunder Bullpen to grab a baseball. Derby would then run it out to the field and play with the Thunder battery warming up for that night's game. It was here that he developed a great friendship with Yankees catcher Austin Romine.
Throughout his life, Derby spent time with hundreds of baseball players and celebrities. , , Alex Rodriguez, Andy Pettitte, , , , , Dale Earnhardt Jr., Katie Nolan, Brooklyn Decker and many more, all had the pleasure of spending time with the second generation of Thunder Bat Dogs.
Derby's closest friend was Hall of Fame Outfielder, Reggie Jackson. In his role as a Special Advisor for the New York Yankees, Jackson is a regular visitor to ARM & HAMMER Park and his first stop was always in the front office to spend time with Chase, Derby and Rookie. Last season, the Thunder honored both Derby and Reggie with a bobblehead of them together. 2017 also saw the Thunder wear special Derby jersey's with a picture of his face on the chest on June 26 and August 27 during the two games in which fans could attend the game with their dogs. The jerseys were the most popular jerseys ever auctioned by the team and raised money for the Delaware Valley Golden Retriever Rescue and Pet Rescue of Mercer.
Derby became a media celebrity over the years as he was featured in major publications, television shows and websites throughout the country and the world. Chief among them was the Emmy nominated ESPN E-60 segment "The Family Business" that debuted on August 11, 2015. "The Family Business" was told through the eyes of Derby and narrated by Bob Peterson of PIXAR. The Academy Award Nominated Writer, Director and Voice Actor has been part of many of PIXAR's box office hits, including Monsters, Inc., Finding Nemo, Toy Story 3 and UP! Peterson co-wrote, co-directed and voiced the main character Dug the Dog in UP!
Fans can see the E:60 video piece by clicking here.
In October 2015, Derby was the subject of a book by author Staton Rabin, "Derby-My Bodacious Life in Baseball" The book was told in first person, by Derby and is available for purchase by clicking here.
Derby became a dad on December 15, 2013 with the birth of his son Rookie and daughter, Mickie.  Rookie joined Derby on the field in 2014 and started his bat retrieving duties full-time in 2016.
Fans wishing to offer their condolences are asked to refrain from sending flowers or material objects to the Thunder. Instead, the team urges fans to make a monetary donation in his name to Trenton Thunder Charities or to Delaware Valley Golden Retriever Rescue.