Gary Kendall to return to Tides for second season as Manager 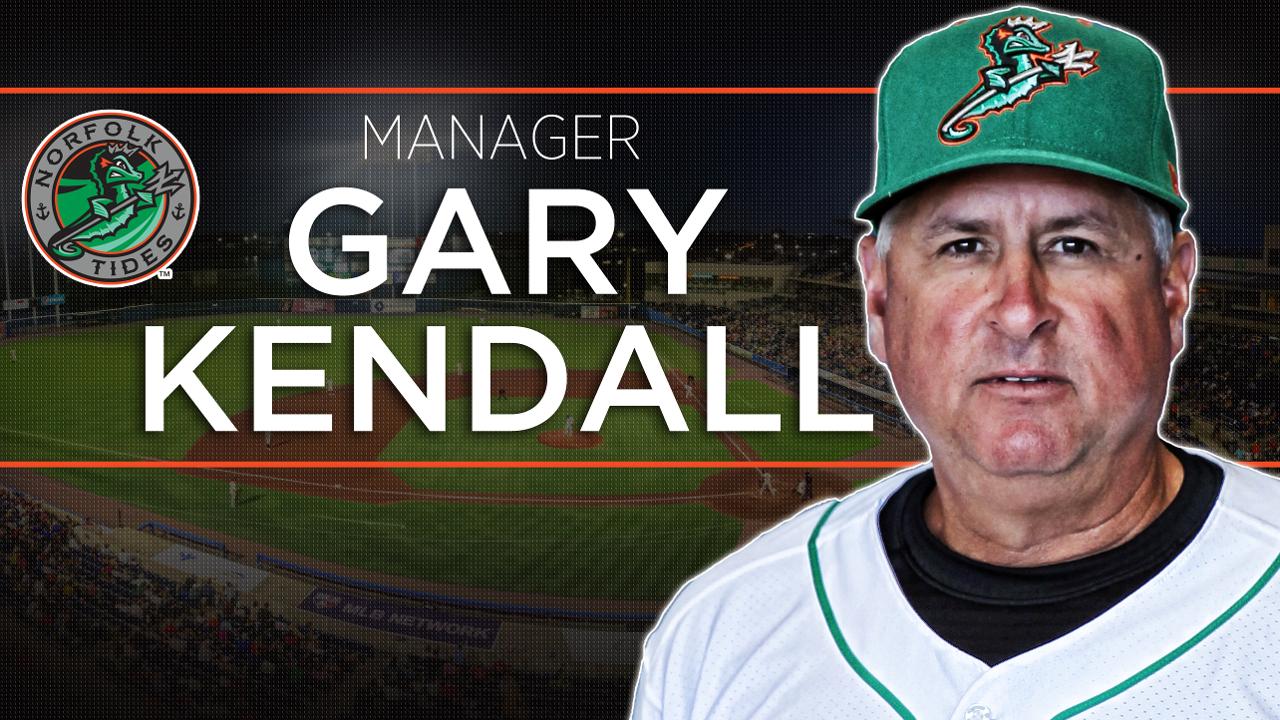 "Baltimore has put together an exceptional coaching staff to lead the Tides in 2020, and we're thrilled to have Gary Kendall back in Norfolk for another season" said Tides General Manager Joe Gregory. "There is no question that the talent in the Orioles minor league system is full of exciting prospects, and we can't wait to see the stars of tomorrow hone their skills at Harbor Park under the guidance of this coaching staff."

Gary Kendall is entering his second year in Norfolk and his 21st season in the Orioles organization. Kendall posted a 60-79 record in his first season with the Tides, leading a squad that featured an International League MVP (IF/OF Ryan Mountcastle) and the league-leader in strikeouts (LHP Keegan Akin). Prior to his time in Norfolk, Kendall spent the previous eight seasons as the manager of the Double-A Bowie Baysox, where he set the club's franchise record with 570 wins. Kendall led the Baysox to a postseason appearance in three of his eight seasons with Bowie, including the franchise's lone Eastern League championship during the 2015 campaign. Following the 2013 season he skippered the Surprise Saguaros of the Arizona Fall League, helping lead them to the AFL championship. He's also managed at Delmarva, Aberdeen and Bluefield in the Orioles system, amassing 962 career managerial victories over his 20-year career. Kendall is a 1982 graduate of Sparrows Point High School in Baltimore, and he went on to play baseball at the Community College of Baltimore and at Atlantic Christian College (NC), where he received his degree in 1987.

Sean Berry is returning to Norfolk as Hitting Coach, the same position he held with the Tides from 2015-2017. Berry was the Hitting Coach for Double-A Jacksonville in the Miami Marlins system in 2019 after a 2018 campaign that saw him serve as Miami's Minor League Hitting Coordinator. Prior to his first stint in Norfolk, he was the Minor League Hitting Coordinator for the San Diego Padres for four seasons and was the Hitting Coach for the Houston Astros from 2006-2010. As a player, Berry appeared in 860 major league games over 11 seasons with the Royals, Expos, Astros, Brewers and Red Sox, posting a career .272 average with 81 home runs.

Kennie Steenstra is entering his first season as Norfolk's Pitching Coach after a three-year stint as the Pitching Coach for Double-A Bowie, where he helped lead the Baysox to franchise records in both ERA (2.17) and WHIP (1.18) in 2019. The 2020 season will be his 17th season as a coach, including his 15th in the Orioles organization. As a player, Steenstra appeared in 285 games (238 starts) over an 11-year career, a stretch that included a four-game stint with the Chicago Cubs during the 1998 campaign. He was a consensus All-American at Wichita State University, where he was named the 1991 Missouri Valley Conference Pitcher of the Year.

Ramon Sambo is entering his second season in Norfolk and his 14th season in the Orioles organization. He was chosen as a coach for the 2019 Triple-A All-Star Game, and he's registered 283 career wins as a manager in the Baltimore and Pittsburgh minor league systems. Sambo began his coaching career in 1997 after a 10-year minor league playing career that included stints in the Phillies, Reds, Brewers, White Sox and Angels organizations.

Eli Steinfield is joining Norfolk and the Orioles organization as the Tides Development Coach. Steinfield spent the 2019 season with the Houston Astros, where he served as a Player Development Technology Apprentice. Steinfield also has previous experience working with the New York Mets and Detroit Tigers.

Chris Poole is entering his third season as the Athletic Trainer for the Tides after spending the previous two years as an Assistant Athletic Trainer with the Orioles. He has been an athletic trainer in the O's organization since 2013, having previously spent time with the GCL Orioles and Aberdeen IronBirds. Poole received his Bachelor of Science degree in Athletic Training from Towson University and his Master of Science degree in Exercise Science with a concentration in Exercise Physiology from William Paterson University.