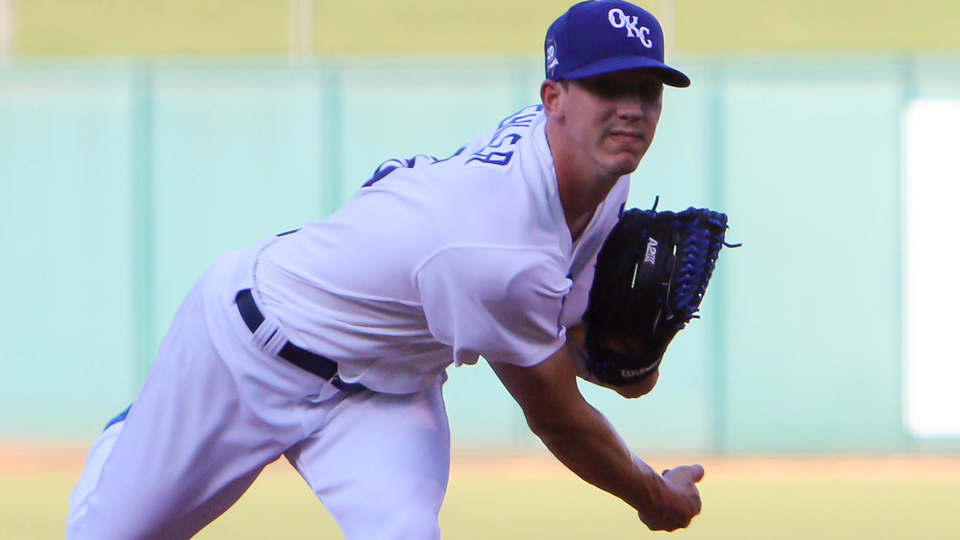 Walker Buehler has struck out 112 and walked 29 in 80 1/3 innings across three levels this season. (Josh Gurnick/Oklahoma City Dodgers)

Not only was Walker Buehler still the Dodgers' top prospect on the day the organization landed Yu Darvish, but the 23-year-old recorded his first Triple-A victory.

After nearly a week of rumors that Buehler, Alex Verdugo or both would be required to bring the ace to California from Texas, the 2015 first-rounder scattered three hits with a walk while striking out six over five scoreless innings in Oklahoma City's 3-1 win over visiting Tacoma on Monday.

Buehler (1-1) sports a 4.50 ERA over three Pacific Coast League starts. After failing to get out of the first inning in his debut on July 20 vs. Memphis, he struck out nine and allowed one run over five frames Wednesday against Reno.

"I wasn't so amped up [in my second PCL start]," MLB.com's No. 13 overall prospect said after finding his form. "I was just trying to throw quality strikes, and I was able to do that. Any time you move up a level, everything can feel different. But it's the same game, and you have to treat it the same. I didn't do a good job of that [in my debut]."

Video: The Dodgers' Buehler picks up his sixth punchout

Following that showing, he threw 54 of a career-high 86 pitches for strikes to frustrate the Rainiers. The Kentucky native retired the first five batters, then shrugged off a double by Tuffy Gosewisch by whiffing Danny Muno to begin a string of four consecutive outs.

Taylor Motter opened the fourth with a single and No. 12 Mariners prospect Daniel Vogelbach followed with a six-pitch walk. Buehler got out of trouble by inducing two straight flyouts and fanning Gosewisch on four pitches.

Ian Miller, Seattle's No. 24 prospect, legged out an infield hit with one out in the sixth and moved to second on an errant pickoff attempt by Buehler. The Vanderbilt product once more brushed off the traffic, whiffing Zach Shank and getting Boog Powell to ground out after Shank took third on a wild pitch.

• Get tickets to a Oklahoma City game »

Video: Vogelbach puts the Rainiers on the board