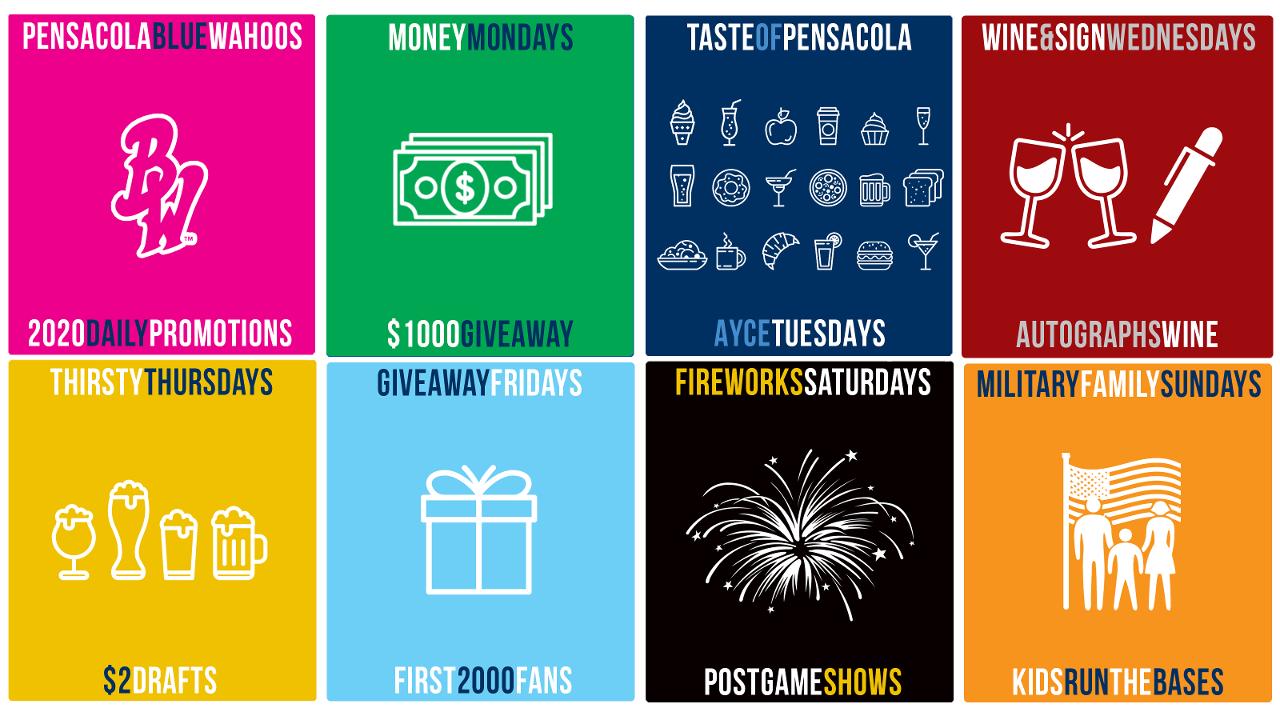 In anticipation of the upcoming baseball season, the Pensacola Blue Wahoos announced their 2020 game times and daily promotions on Thursday.

"The fans spoke, and we listened," team president Jonathan Griffith said. "In surveys throughout the year, our fans expressed that they enjoy our Monday through Friday 6:35 starts and our 6:05 game times on Saturdays, so those are staying the same next season. Fans also overwhelmingly told us that they would like our games to start later in the afternoons on Sundays and they'd like our mid-week firework shows to be on Wednesdays. We listened."

The only exception will be on the 4th of July, when the Blue Wahoos game will begin at 5:05 PM to coincide with local fireworks shows.

Alongside the release of their game times, the Blue Wahoos also released their daily promotions for the upcoming season.

Mondays will be Money Mondays at Blue Wahoos Stadium. Over the course of their 11 Monday home games in 2020, the Blue Wahoos will give away a guaranteed $11,000 to lucky fans! Each Monday, $1,000 will be on the line, with any unclaimed money being rolled over and added to the next Monday game's pot! All fans (18+) will be eligible to participate in the contest.

Tuesdays will be Taste of Pensacola Tuesdays in 2020, adding a local flair to the team's popular Fat Tuesday promotion. For just $24, fans will receive a ticket to the Winn-Dixie Party Deck, a ballpark buffet dinner featuring samples from local Pensacola restaurants, unlimited water and soda, and an exclusive Blue Wahoos hat. Each Tuesday, the Blue Wahoos will also recognize a local team, club, group, or organization that they consider a "Pensacola Champion".

Wine and Sign Wednesdays will return in 2020, featuring half-off glasses of wine throughout the game and a pre-game player autograph session in the Bait & Tackle Shop!

The fan-favorite Thirsty Thursdays are also back in 2020! Each Thursday, draft beer will be just $2 at Blue Wahoos Stadium and a host of other specialty drinks will be discounted. The Wahoos Wobble will return at select Thirsty Thursday dates in 2020.

Each Friday, the first 2,000 fans through the gates will receive an exclusive giveaway item at the team's popular Giveaway Fridays.

Saturdays will once again be Fireworks Saturdays with a post-game fireworks spectacular over Pensacola Bay! The team will also host an additional five mid-week fireworks shows on select Wednesdays throughout the season.

Each Sunday at the ballpark will be Military Family Sundays. Active or retired military members will receive a discount at the box office (with valid I.D.) and military families will be honored and recognized each week. Post-game kids run the bases and family toss in the outfield will also return.

Season Ticket Memberships for the 2020 season are already on sale. Mini Plans will be available to fans starting Tuesday, November 19, allowing fans to secure tickets to any combination of 5 or more games at a discount. Single Game Tickets will go on sale on March 1, 2020. Ticket Memberships can be viewed and purchased at BlueWahoos.com, by phone at 850-934-8444, or by visiting the box office at Blue Wahoos Stadium.